“Baseball fans love numbers. They love to swirl them around their mouths like Bordeaux wine.” – Pat Conroy

There was a time that I consumed everything baseball. I am not the first to say that baseball is the “thinking person’s game” but there were few that tried to embody it like I did. That all changed, however, at a very precise time, on a very specific day.

Before I get there, though, I need to back it up just a bit. Growing up, I was a bit of a math geek, to put it mildly. Give me any math problem, in fact, anything dealing with numbers and I would devour it wholeheartedly. If I trace my obsession with math back to its roots, it lands squarely on baseball.

For most baseball aficionados, the love of the game is intrinsically linked to the statistics of the game–the records, the averages, the probabilities. As I watched games, in my head I would continuously update batting averages, slugging percentages, and earned run averages on the fly as action in the game progressed.

Even into young adulthood when “normal” humans turned their collective attention towards cars, love, or worse, politics, I stayed the course with my beloved baseball, even though the two teams of my youth (the Cincinnati Reds and the Detroit Tigers) had both seemingly given up trying to field a consistent winner.

On August 12th, 1994, my birthday, the players went on strike. Many players at the time, when asked why they were striking, cited the “need to provide for my family.” The highest-paid player that year was Bobby Bonilla of the Mets. He made over $6 million. The median salary that year was $1.2 million. I was a high school teacher in the Bay Area making $38,000 a year. And these clowns were talking about providing for their families.

There was no longer any denying the fact that the game had become a business and was no longer really a “game.” I was done with baseball, and I never really looked back.

Until, that is, we moved to Houston. In 2016, the Astros were competitive and frankly, a lot of fun to watch. At the team’s core were several young players who genuinely seemed to have fun playing the game and it was impossible not to like them.

The following year, I bought back into baseball and followed the Astros with my two sons all the way to the World Series, which they won in dramatic fashion.*

Friends of ours, knowing of my passions for both the team and wine, decided to get me a gift to commemorate the season. They gave me this: 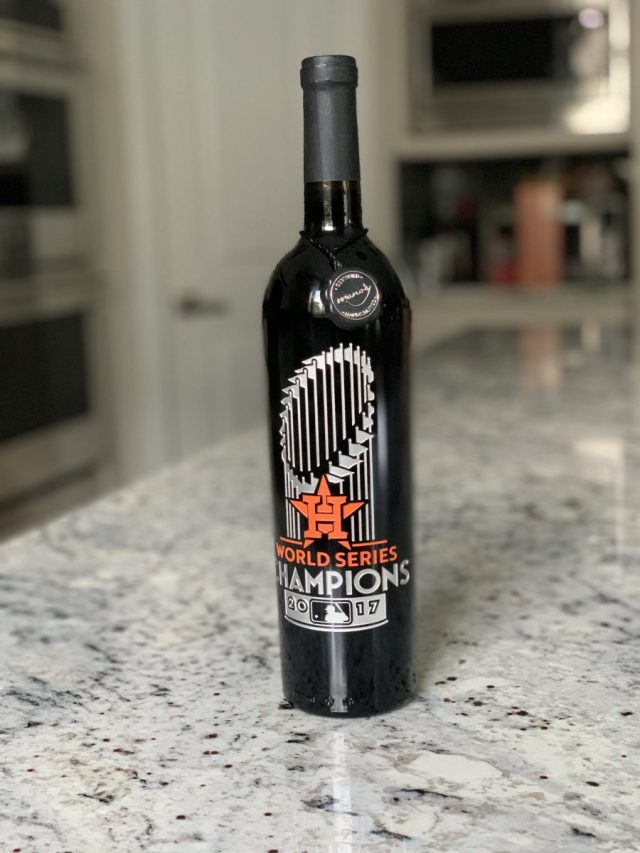 A very nice gesture, for sure, but I was not really sure what to do with it, since I was fairly certain the wine was not going to be any good, nor was it going to get any better with age. So I did what I always do in such instances: I let it sit around and gather dust.

Until this past week.

Our friends were in town (they had moved away shortly after gifting us the bottle) and that bottle was going to get opened. Here is my tasting note:

2017 MLB Houston Astros Club Series: Retail $50. “Red Blend” is all that it says on the bottle, but the website says it is a “Cabernet/Merlot blend.” There is no doubt that it is a cool bottle: embossed, engraved, enshrined, emboldened. But. The back label indicates that it was bottled by “Mano’s Kansas City, MO.” Well, color me a regionalist, but I know of absolutely ZERO quality wines out of Kansas City. Or Missouri. Or anywhere within 837 miles of Kansas City. Missouri. Or Kansas. Or Ark Kansas. Or… Still, the wine is not, well, “bad.” A bit medicinal with faint signs of fruit and a bit of pepper on the nose. The palate? While not at all offensive, it is a bit contrived: overly fruity, lacking depth, a bit hot. Does that describe the 2017 Astros? That is for you to decide. 85-87 Points.

*That 2017 title has since become, well, tainted, to say the least as the Astros were caught cheating. Will I watch them again this year? I really don’t know, but this wine certainly did not persuade me to do so.