2007 Amelle Zinfandel Buck Hill Sonoma County, CA: Retail $25. It’s a long story, but I received this bottle from the winemaker as a “thank you” when I organized a large purchase of his wine. I was originally “sold” on Eric Buffington’s winemaking ability when he was the assistant winemaker at Freeman Winery in Sebastopol. Eventually, he introduced me to his own brand through the 2008 Buck Hill Zin, which he introduced as a “cold climate Zin” which, in effect, was very like a Pinot (my wheelhouse). This 2007 is quite different: fruit-driven, a bit big, and up there in alcohol (16.2%). Still, this is balanced and quite nice. Very Good to Excellent. 88-90 Points.

NV Bollinger Champagne Special Cuvée Brut, France: Retail $60. 60% Pinot Noir, 25% Chardonnay, 15% Pinot Meunier.  Over 85% Grands and Premiers crus. Another young bottle (bought within the last few months). Solid, excellent, consistent with other such bottles: This wine is delightful (the French would probably say “fresh”) with bright fruit, lively tartness, and a fervent bubble. Subtle notes of brioche on the nose, and a tad yeasty on the palate. Like I said, delightful. However. With a bit of time (say five years, minimum) this wine would develop into a different animal altogether. While delightful now, I would much prefer it 5-10 years from now… But it is clear Bollinger gets better with time. I need to remember to hold onto the remaining bottles for at least a few more years (and neglect to tell my wife about the plan). Excellent. 90-92 Points.

2009 Lemelson Vineyards Pinot Noir Thea’s Selection, Willamette Valley, OR: Retail $40. I bought six bottles of this wine back in 2011 and this is the fourth that I have opened. Unlike the Secondé champagne (below), this wine has been remarkably consistent over those four bottles: Aromas of black cherry and eucalyptus, with a bit of smoke, waft out, leading to really good fruit up front with plenty of complexity all the way through. Yet another example of Oregon producing world-class Pinot. Excellent. 90-92 Points.

2013 Michael-David Vineyards Cinsault Ancient Vine Bechthold Vineyard, Lodi, CA: Retail $22. 100% Cinsault. I picked up this wine on my first time in Lodi way back in 2015, on my first press trip as a “journalist.” And then I forgot about it. Until tonight. I had just returned from a long drive from Arkansas. Yeah, Arkansas. I debated whether to open a bottle of wine and while perusing my cellar, I came across this bottle and felt it was calling my name. Boy was it. Believed to be the oldest Cinsault vineyard not just in Lodi, but the entire world. Fruity (plum and pomegranate) with eucalyptus on the nose with plenty of fruit and flesh on the palate. But there is much more: depth, earth, and mostly integrated tannins. I was completely floored by this wine, it is fantastic. Whoa. Excellent to Outstanding. 92-94 Points.

2017 Prieuré de Montézargues Tavel, France: Retail $25. 55% Grenache, 30% Cinsault, and 15% Clairette. While this is certainly dark for a rosé, it is light for a Tavel–the lightest hue allowed in the appellation. Quite fruity on the nose with peach, watermelon, red berry, and a hint of red flower. The palate is lovely: good fruit, acidity, balance, a lovely wine. Very Good to Excellent. 88-90 Points.

NV J.P. Secondé Champagne Blanc de Blancs, France: Retail $45. 100% Grand Cru Chardonnay. This, the third bottle, is much closer to the second than the first. [Hmmmm. The last bottle I had of this wine was quite different (at least according to my notes), while there is much the same with the lemony and baked bread notes, the tart acidity, and the vibrant sparkle, this wine does not come off nearly as sweet as the last bottle did. Why is that? Was it due to the difference in food pairing? Bottle differentiation? My gradual slide into dementia? I have no idea, but I do know that the wine in my glass right now is delicious.] This bottle continues the rather disturbing trend with the wines I purchased from this producer: consistent bottle variation. Very Good to Excellent. 89-91 Points.

2007 Skewis Pinot Noir Montgomery, CA: Retail $65. This is the fourth and last bottle of this wine that I had in my possession and this one came through an auction at my son’s school (for which I had arranged the donation). The bottle is signed by both Hank and Maggie Skewis. While I have an opinion on signed bottles (I think they are a bit goofy–it’s a nice thought, but you never want to drink them!), Hank and Maggie are two of the nicest people I have met in the wine industry. Since they have retired, my once healthy stock of Skewis wines is diminishing and will sadly never be replenished. Fruity, with dark berry fruit on the nose, the fruit is more reserved on the palate, no doubt reduced by a shade or two with its dozen years in the bottle. The acidity is still prevalent, vibrant, and impressive, however, carrying the wine from first sip to lengthy finish. They have only been retired a few years, but it feels as though there is a significant hole in the wine world with Hank and Maggie’s departure. Excellent to Oustanding. 91-93 Points. 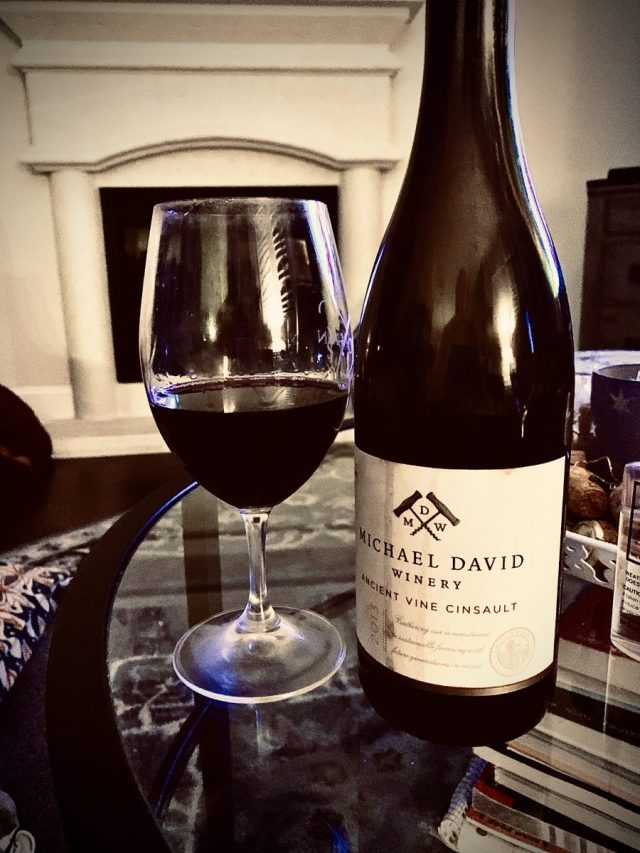 WINE OF THE WEEK: While the Montgomery Vineyard Pinot Noir from Hank and Maggie Skewis was certainly an excellent wine (and normally a strong contender for weekly honors), there was really only one choice for this week’s Wine of the Week: the 2013 Michael-David Vineyards Cinsault Ancient Vine Bechthold Vineyard. If you have even an ounce of wine geekiness in you (and if you are reading this, I am guessing that you do), if you have not yet visited an “ancient” vineyard, you need to put that high up on your bucket list. Old vineyards, while de rigeur in Europe, are fairly difficult to come by here in the U.S. due in large part to that unfortunate period of time known as Prohibition. Just a few vineyards planted before that silly time still are thriving and the Bechthold Vineyard might just be my favorite. Planted on really sandy soils (which is how it avoided phylloxera) to a rather obscure variety (at least in this country), it kind of defies all logic, which is what makes it wonderful. Oh yeah, and it produces some really fantastic wine. 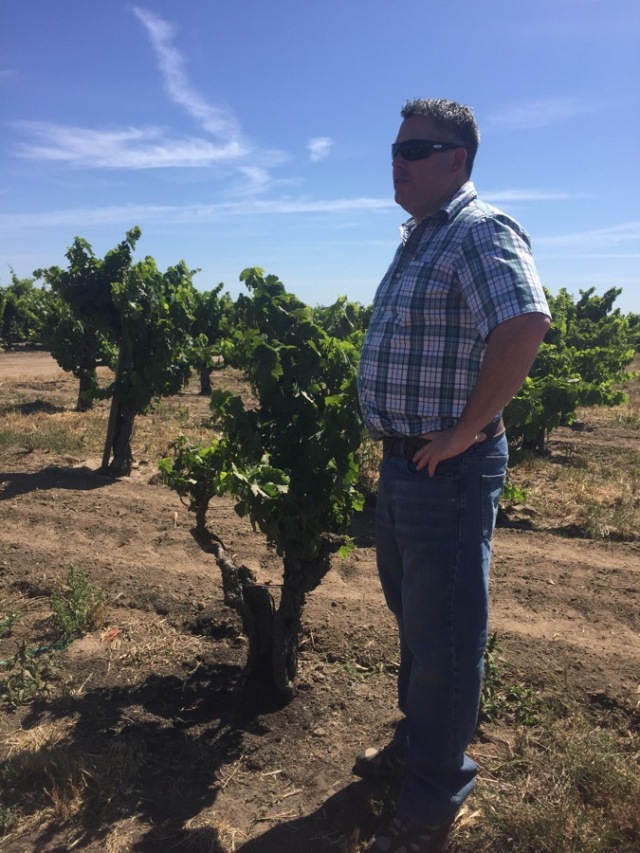 Kevin Phillips in the Bechthold Vineyard.

I have been an occasional cycling tour guide in Europe for the past 20 years, visiting most of the wine regions of France. Through this "job" I developed a love for wine and the stories that often accompany the pulling of a cork. I live in Houston with my lovely wife and two wonderful sons.
View all posts by the drunken cyclist →
This entry was posted in Champagne, Chardonnay, Cinsault/Cinsaut, Clairette, Grenache, Pinot Noir, Wine, Zinfandel. Bookmark the permalink.