For the Sake of Saké

I hate to admit this, but I can count on one hand the number of times I have tasted saké and one of them was tasting the sakés below for this article.

Why is that? One reason, for sure, is that I grew up in a lower-middle-class household where Pabst Blue Ribbon was considered a bit “fancy” (my father preferred Red White and Blue, Pabst’s off-brand beer).

[I have to say that I consumed exactly one can of RWB in my life–after mowing the lawn on a rather hot and sticky day when it was the only cold beverage in the fridge. And it was god-awful (but it was cold). There was a Change.com petition a few years ago to bring back the beer (which has not been produced since the 1980s). It got six signatures.]

Another reason? Until relatively recently, I really did not understand what saké was. Saké is almost universally called “rice wine” but it is, in fact, brewed and therefore not a wine at all, but rather more closely associated with beer (had my father known that however many years ago and there was a widely available cheap, knock-off, saké that he could buy at Kroger…).

Nonetheless, when the fine people at Tippsy Saké (the “best online sake store in the U.S.”) offered to send me a few bottles to try, I readily agreed.

When the saké landed on our doorstep, my wife was surprisingly excited. “My dad loves saké!” Huh? We have been married for quite some time, now, and I can safely say that I have never had any saké with either my wife or her father, both of whom are Asian (albeit Korean). And this was the first that I have heard that my father-in-law has a particular affinity for the traditional Japanese brew (even though he happens to live right behind us now, have I mentioned that?). Moving on.

Thus, a couple of weeks ago when my wife’s brother sent a boatload of sushi as a gift, we thought it would be the perfect time to give these sakés a spin (and maybe score a few points with the in-laws–not that I need them, but you never know…).

I am particularly fond of sashimi, but it is not for everyone, being raew fish and all.

I will not delve into the process of saké production as there are several websites that do a much better job than I would (and I would just be plagiarizing them anyway), but it is important to point out that I was sent two different types of saké. The first, Ginjo, is a relatively new way to make saké (as in the last 50 years, which is new considering saké has been made for about 2000 years). By polishing the rice further, the resulting saké is drier and more refreshing. 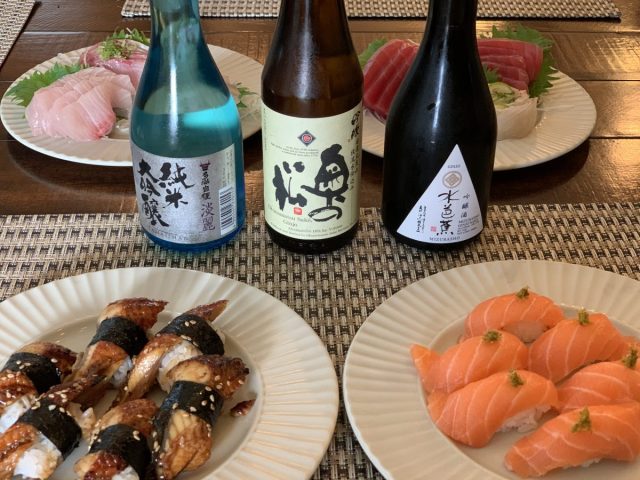 The Unagi (eel, on the left) is always cooked since it would probably kill you if you eat it raw. On the right is salmon sashimi.

The second type, Daiginjo (which means “big Ginjo”) is described as the “height of the brewmaster’s ability.” The brewery usually uses their best rice, use much smaller batches, and produce much smaller quantities. As a result, it can be rather pricey and is generally viewed as a special occasion saké.

Okunomatsu Ginjo, Fukushima Prefecture: Retail $33 (720 ml). 15.0% abv. A bit sweet on the nose with pear, fennel, anise, and a bit of ginger. The palate is dry, with a slight fruitiness that comes off as a tad sweet.  A tad bitter on the finish. My father-in-law’s favorite, as it was the sweetest of the three. Very Good. 87-89 Points. 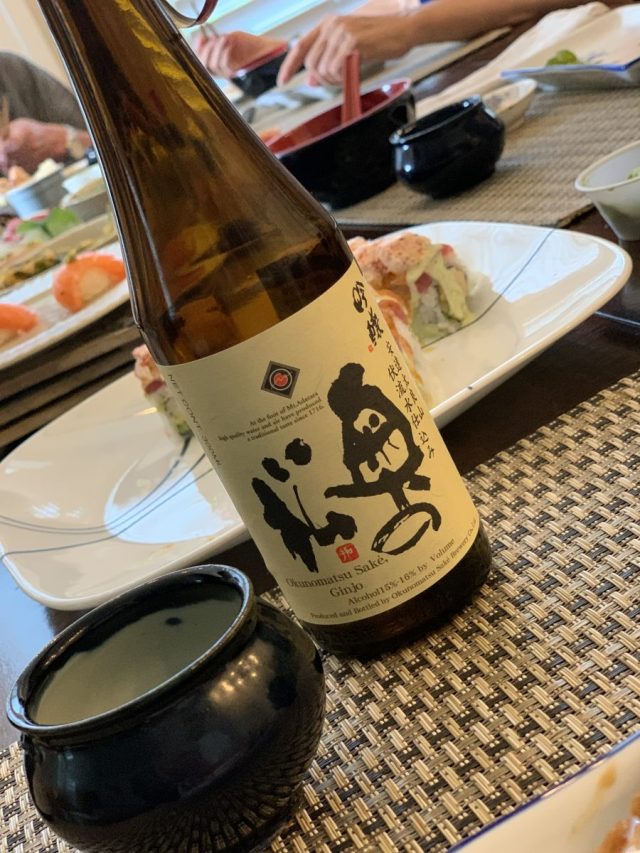 Mizubasho Ginjo, Gunma Prefecture: Retail $29 (720 ml). 16.0% abv. Not as fruity or sweet as the previous but lacks the bitterness as well. A bit hot on the finish. Mostly green apple, pear, and maybe kiwi here. Very Good to Excellent. 89-91 Points.

Tamajiman Juneau Daiginjo, Ishikawa Brewery, Tokyo: Retail $130 (720 ml). 14.0% abv. Much more of a red wine smell here, a bit stewed, even. Fruity on the palate with subtle blackberry and plum.  A bit of creaminess on the finish. Nicest of the three, in my opinion. Excellent to Outstanding. 92-94 Points. 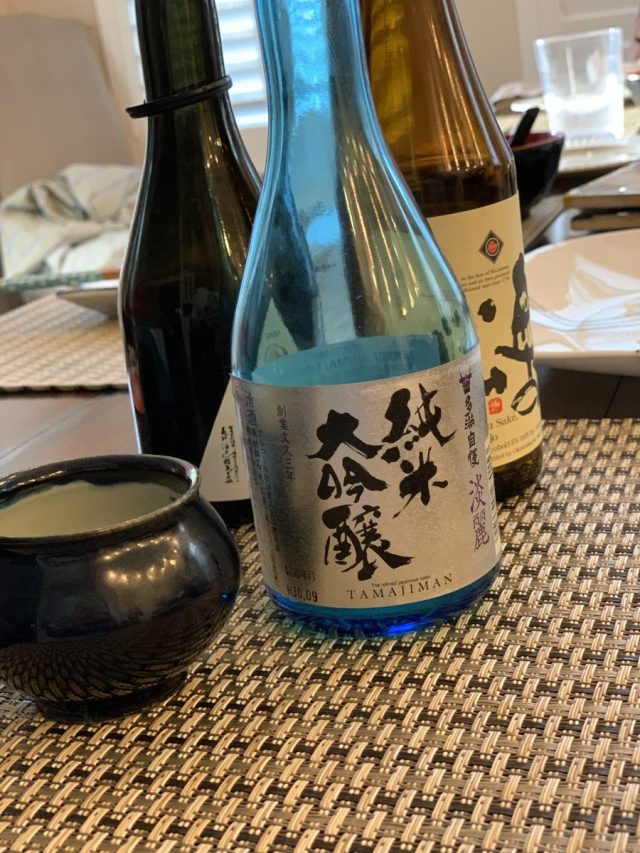 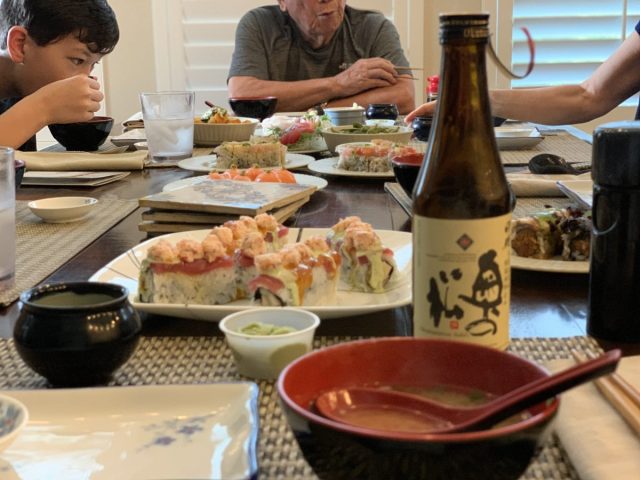 The six of us managed to polish off most of the sushi… and saké.

I have been an occasional cycling tour guide in Europe for the past 20 years, visiting most of the wine regions of France. Through this "job" I developed a love for wine and the stories that often accompany the pulling of a cork. I live in Houston with my lovely wife and two wonderful sons.
View all posts by the drunken cyclist →
This entry was posted in Saké, Wine. Bookmark the permalink.

2 Responses to For the Sake of Saké