Posted on September 14, 2020 by the drunken cyclist

2005 Domaine Jessiaume Santenay 1er Cru Les Gravières, Burgundy, France: Retail $45. 100% Pinot Noir. I bought a half a case of this wine back in 2011 on sale for the mere price of roughly $20/bottle. I popped the first in 2104 and it was stellar. This was the second we opened, some six years later. It might be even better. The nose is slightly muted with just a hint of being stewed, but it is also rich with dark berry fruit, mint, and some tobacco. The palate is close to stunning rich fruit (in a reserved Burgundian way), near-perfectly balanced acidity, and a depth of flavors that one would expect from “higher-level” Burgundies. Whoa. And then some. Outstanding. 93-95 Points.

NV Mailly Champagne Grand Cru Brut Rosé, France: Retail $50. 90% Pinot Noir, 10% Chardonnay. In general, the scores on Cellar Tracker for this wine have been going up. I did not do a statistical analysis, but there seems to be a clear upward trend (particularly when you exclude the bozo who rated this wine seven times [his *only* notes written in his nine years on CT] with scores from an 85 down to a 64). This makes sense as the winery has both been continually modernizing and gradually reducing the amount of sugar in the dosage. Brilliant bubblegum reddish-pink with strawberry confit, watermelon, canteloupe, and a host of other aromas on the nose. The palate is fruity, tart, and focused. It seems as though they are pretty close to the level of sugar here in the dosage (8g/l) but it could still go a tad lower, in my opinion. Rich fruit, zingy tartness, considerable minerality, and a touch of yeasty goodness dominate the palate. Fantastic. Excellent. 91-93 Points.

2003 Mauro Veglio Barolo, Italy: Retail $50. 100% Nebbiolo. For whatever reason, I decided to pull out this wine as well as a 2005 Burgundy fearing, after reading the notes on Cellar Tracker, that one or both might have turned and were well on the downward slope. Well, a funny thing happened on the way to the corkscrew. This, like the Burgundy, was absolutely fabulous. Minty, fruity (still), peppery on the nose after a bit of time open (muted initially). The palate? Whoa. I really don’t understand the other comments on Cellar Tracker–this wine is gangbusters: rich, fruity, great balance, and still muscular tannins. I have one more bottle and I am in absolutely no hurry here. Outstanding. 94-96 Points.

NV Veuve Clicquot Ponsardin Champagne Brut Rosé, France: Retail $60. 44 to 48 % Pinot Noir, 25 to 29 % Chardonnay, 13 to 18 % Meunier. I have written more than enough on this wine and I have no problem admitting that I am a fan. Sure, the dosage is a bit on the sweet side, but there is good fruit, nice complexity (due, no doubt, to the liberal use of reserve wines), and a lengthy finish. Sure, Clicquot is huge, corporate, and likely devoid of anyone who has dit under the fingernails, but that does not render this a *bad* champagne. The scores on Cellar Tracker range from 100 (?!) down to 70 (?!?!), with one of the commenters claiming, basically, that Veuve rosé is insipid and that you (we?) should all drink grower champagne. Give me a break, “farmer fizz” is not inherently better just because it is produced by the grower. That’s just a stupid comment. I have tasted a ton of champagne, trust me, this is Excellent. 90-92 Points.

2007 Von Hövel Scharzhofberger Riesling Spätlese, Mosel Saar Ruwer, Germany: Retail $40. I bought eight bottles of this eight years ago from Last Bottle and I opened the first within a year of the purchase. Well, this was the second. Why the gap? I have no idea. In part, I guess, is the fact that this wine is fairly sweet and we just don’t consume very much sweet wine anymore. Also, good German Rieslings can age and this is a good German Riesling. Nay, it is excellent, so I figured “what’s the rush?” Golden color, on the verge of dark. So dark, in fact, that one might think that this wine is oxidized–but it’s not, it’s lovely. Green apple, petrol, lemon rind on the nose, tart, racy, and yes, sweet on the palate. I pulled this for my attempt at Thai Basil Chicken and this wine held its own very well against all that heat (and is even better on its own). Excellent to Outstanding. 91-93 Points. 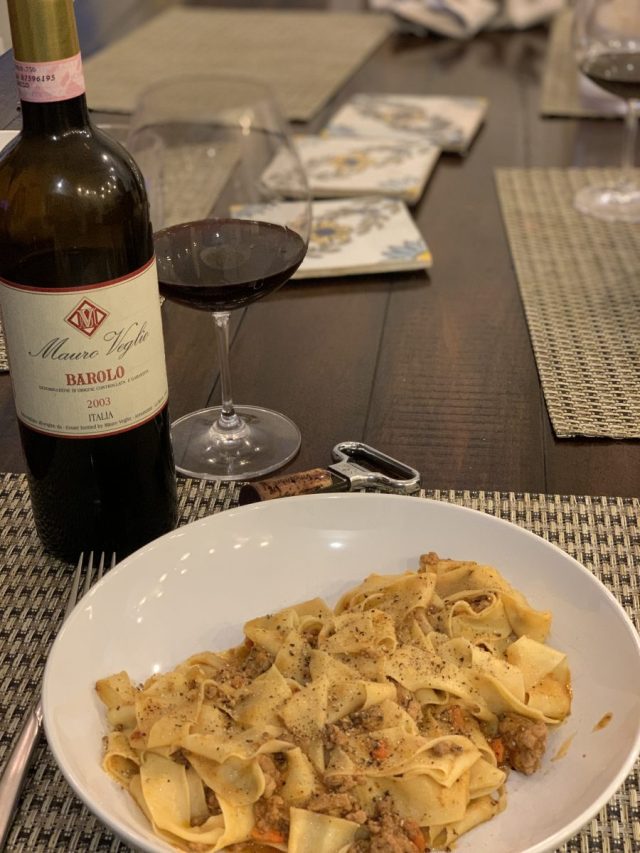 Could it have helped that I served the Barolo with my homemade Bolognese and freshly made tagliatelle? Um, yeah.

WINE OF THE WEEK: As has happened from time to time over the last several years writing this weekly wrap-up of the wines that we have consumed from the cellar this week, it came down to two wines. This week, I guess coincidentally, both were opened on the same evening. The first, the 2005 Domaine Jessiaume Santenay les Gravières was a treat. It is not a wine from one of the more heralded appellations in Burgundy, but it comes from a town and a vineyard that I know fairly well from my time leading tours in the region. The second, and this week’s Wine of the Week, the 2003 Mauro Veglio Barolo, was just a slight notch above and might prove once and for all that my once decided French bias has waned considerably.

I have been an occasional cycling tour guide in Europe for the past 20 years, visiting most of the wine regions of France. Through this "job" I developed a love for wine and the stories that often accompany the pulling of a cork. I live in Houston with my lovely wife and two wonderful sons.
View all posts by the drunken cyclist →
This entry was posted in Champagne, Chardonnay, Nebbiolo, Pinot Noir, Riesling, Wine. Bookmark the permalink.