The First Ripple from Aquilini

Posted on September 23, 2020 by the drunken cyclist

Chances are unless you are from Vancouver, you have never heard of the Aquilini Family but they are poised to make a big splash in the Washington state wine scene (and I am sure that some would say they already have).

It started back in 2013 when essentially the last plantable acreage in the Red Mountain AVA went up for auction. In what could have been a scene out of a James Bond movie, a mysterious turban-wearing man outbid the local producers, some of whom had pooled their funds together in hopes of securing what amounted to approximately a fifth of the total acreage of Washington’s hottest (both in terms of temperature and desirability) appellation.

The mystery man was the highest bidder that night and while his identity is still unknown, it soon became clear that the owners of the 670 acres (535 of which are in the Red Mountain AVA) was the Aquilini Family, owners of the Vancouver Canucks hockey club and reportedly, the world’s largest farmers (of mostly blueberries and cranberries).

This would be their first foray into wine, however, and quite a leap. Since that first purchase, the Aquilini’s have acquired additional vineyard properties in the state, including in the Horse Heaven Hills AVA. While much of what the Aquilini’s have planned for their various vineyards remains, much like that turban-clad gent, shrouded in mystery, a few of their projects are slowly being released.

Thus, when I was invited to partake in a Zoom tasting of some soon-to-be-released wines with Aquilini Brands CEO Robert Chin and winemaker Joshua Maloney, I jumped at the chance (I did not actually “jump” it’s a metaphor).

While the production of the following wines was rather small (about 3,000 cases each), the plan is for near nationwide distribution, starting with about 15 states this fall (including WA, CA, and TX). They are intended for sale in grocery stores and large retailers (e.g., Total Wine), so they will likely be available near you soon. They will also be available soon from the Aquilini website (which is extremely well-done, at least at first glance) with, according to Robert, “rather aggressive shipping rates” (i.e., low) at least initially. 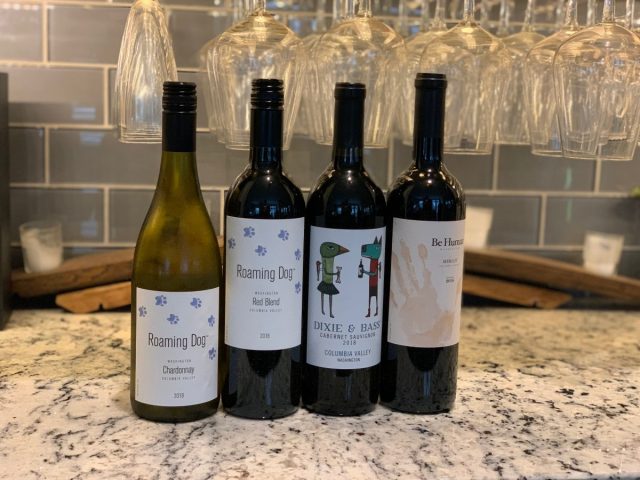 2019 Roaming Dog Chardonnay, Columbia Valley, WA: Retail $13. Under screwcap. This is the first edition of this wine from Aquilini, released just in the past few weeks. While the appellation is Columbia Valley, the vineyard is apparently just across the street from the Red Mountain AVA. Fruit dominates on the nose with oodles of ripe tropical and citrus notes. The palate is much of the same with guava and pineapple at the front, with some lemon rind in the shadows. While there is little oak influence, harbor no illusions, this is a big ‘un. If you like your Chards big, bold, and affordable, here you go! Very Good. 88 Points.

2018 Roaming Dog Red Blend, Columbia Valley, WA: Retail $13. Under screwcap. 34% Cabernet Sauvignon, 32% Malbec, 31% Merlot, 3% Cabernet Franc. Another first release from one of the Aquilini brands, this (like the Chardonnay) punches well above its weight, no doubt due to the amount of Red Mountain fruit in this wine (no, I could not get a precise percentage). Thirteen bucks? OK, I am all in, I call your bluff here! No bluff, this wine has the nuts (poker term): dark in the glass with aromas of blackberry and mocha front and center. Quite drinkable, quaffable, even, this goes down far too easy, which I assume is the goal. Look, this is not a high-brow player in Sketchers, it is more of a t-shirt, shorts, and flip-flops, but holy cow is that a winning combo! Very Good. 89 Points.

2018 Be Human Merlot, Columbia Valley, WA: Retail $16. 76% Merlot, 11% Malbec, 9% Cabernet Sauvignon, 4% Cabernet Franc. Barrel-aged for 18 months. OK, let’s be honest. Who’d ever list Merlot as their “go-to-number-1” wine? Right. No one. Well. We might want to reconsider. While this will never supplant the Right Bank in one’s cellar, it’s more than a solid choice for the “oh crap, my Uncle Cletus from Arkansas just showed up” kinda night. Surprisingly dark in both color & aromas, this presents itself as on the verge of brooding, which will surprise just about every Merlot drinker (all seven of them). Dark fruit, black pepper, dark earth, all on the palate. I prepared myself for a brutish tannic beast, but that never materialized, not even close. No, this is a wine for the now. Maybe the right now. Rich fruit, integrated tannins, depth. Sixteen bucks? Buy this before they realize that they could get a bunch more than that. Excellent. 91 Points.

2018 Dixie & Bass Cabernet Sauvignon, Columbia Valley, WA: Retail $17. From the website: “Cabernet Sauvignon and Malbec from Columbia Valley. Tank fermented then barrel-aged for 16 months in 25% new American oak.” Another winner from the Aquilini Family who seems to have nailed the under-twenty-bucks pricepoint to the Castle Church in Benton City (OK, that reference was a huge reach, but if you got it, more power to you!). So there are two critters on this bottle but this certainly does not taste like a “critter wine“: dark in the glass, rich on the palate and nose, this is a steal for under $20. But Luther then again was against theft. Hmmmm. Excellent. 91 Points. 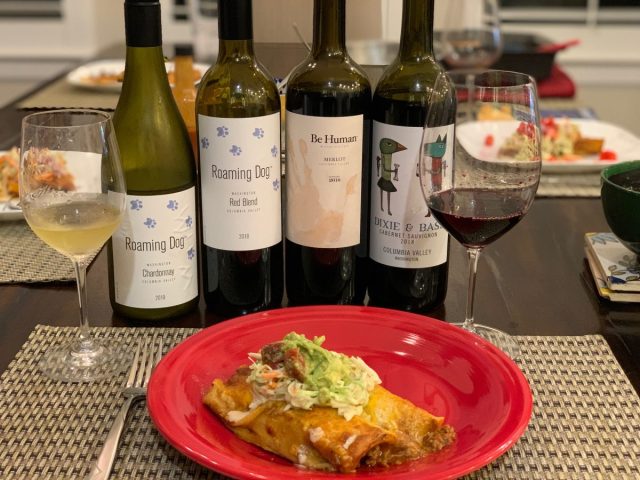 I tried all of the wines out with my beef and chorizo enchiladas, topped with spicy yogurt slaw and guacamole. Pretty solid.

I have been an occasional cycling tour guide in Europe for the past 20 years, visiting most of the wine regions of France. Through this "job" I developed a love for wine and the stories that often accompany the pulling of a cork. I live in Houston with my lovely wife and two wonderful sons.
View all posts by the drunken cyclist →
This entry was posted in Cabernet Franc, Cabernet Sauvignon, Chardonnay, Malbec, Merlot. Bookmark the permalink.

2 Responses to The First Ripple from Aquilini