This week I am back with more of my conversation with Karen MacNeil, world-renowned wine writer, author of The Wine Bible, and who recently released a new series of wine glasses called Flavor First™ by Oneida.

The process to get these glasses to the market was lengthy and started with why there was a need for another glass and some of the specifics of what Karen wanted in a glass that would bear her name.

Wait, what do you have against white wine glasses?

As you will see in the next clip, I ask Karen if she got any pushback from the glass manufacturer, Oneida, since they have been making glassware for well over a century and what Karen was asking for involved some pretty radical shifts in thought.

We next touched on the individual glasses themselves. There are three: Crisp & Fresh™, Creamy & Silky™, and Bold & Powerful™:

What really surprised me is the depth and breadth of research that Karen did in developing these glasses. She would be the first to admit that the following clip gets fairly geeky, delving into the intricacies of what is going on in the glass:

Wait, so what is going on here? Since starting my doctoral program, I am pretty much a “show me the data” kind of guy. Are there any data that support why certain wines smell and taste different in certain glasses?

After talking with Karen, I decided to take a little deeper dive into the glasses on my own. The following day, I had a Zoom call with Stu Smith of Smith-Madrone (more on that conversation soon) and decided after that call to taste the three wines we tasted out of each of Karen’s Flavor First™ glasses.

I started my little “experiment” with the 2017 Smith-Madrone Chardonnay, a fantastic wine that gets over-shadowed by the Riesling from the same producer (see below). I tried it in all three glasses, and here are my thoughts:

Crisp & Fresh: A bit closed on the nose with some lovely lemon rind, vanilla, and minerality coming through. The palate is quite tart, with oodles of  citrus, quite expressive.

Creamy & Silky: While the fruit and secondary characteristics remain the same, there is a bit more depth here, creamier, with the bright fruit playing less of a role. Overall, a richer, deeper nose. The palate is much the same, but again, a bit richer, fuller, and yes, creamier.

Bold & Powerful: The fruit is almost non-existent here–I really can’t pick up much at all. The creaminess that was prevalent in the second glass is also much more muted. Mostly getting a melted butter aspect which I did not pick up at all in the first two glasses. Again, the palate is similar but, if anything, that fruit is definitely in the back seat.

Analysis: So I started with the first glass, which was the most expressive by far on the nose, and, it seems, on the palate. I then went back through the three glasses again, in reverse order, and the results were similar. While I had anticipated that the Creamy & Silky glass would be the “winner”,  the Crisp & Fresh glass perhaps better concentrated the fruit. Still, the creamy aspect of this wine was underscored by Creamy & Silky glass and I ended up giving that one the slight nod (although it was close).

The second wine was the 2017 Smith-Madrone Riesling, a much-coveted wine from the fantastic Napa producer.

Crisp & Fresh: Again, a really expressive nose with concentrated citrus (lemon and lime), intense minerality, and that classic petrol that usually defines Riesling. The fruit persists on the palate but it is quickly joined (and surpassed) by the intense acidity.

Creamy & Silky: In this glass, the fruit is less evident once again, though still present, but the predominant aroma is that petrol here. After a few twirls, that petrol only intensifies (and the fruit diminishes further). Not a noticeable difference on the palate vs. Crisp & Fresh.

Bold & Powerful: The fruit is virtually gone here and that prevalent petrol is diminished as well. Interestingly, the fruit on the palate is much more alive than with the Creamy and Silky glass (but that could be due to the additional time in glass/open).

Analysis: Again, going back down the scale, so to speak, my initial impressions were confirmed and given that Riesling is driven so much by its aromatics, the Crisp & Fresh stem was the best fit (although the Creamy & Silky was a close second, for sure). 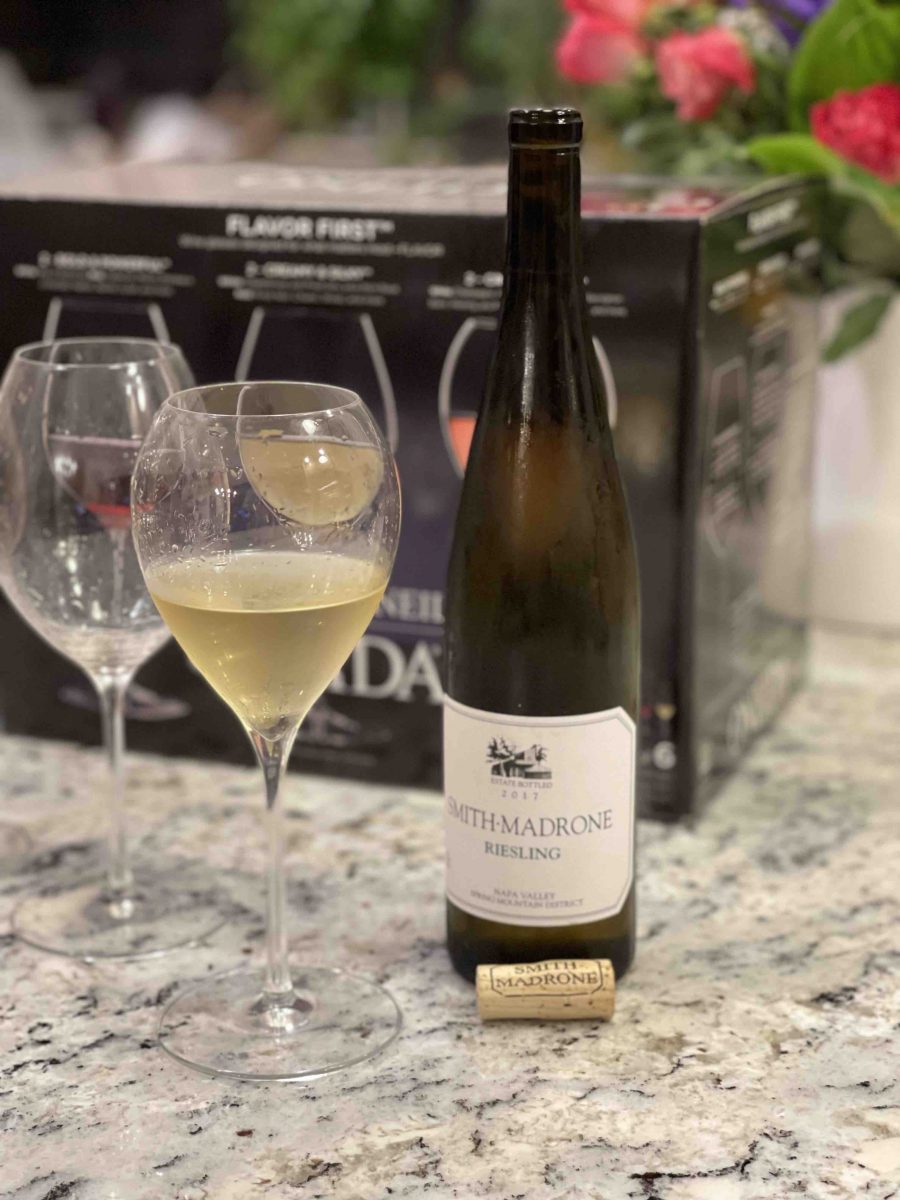 The third wine that I put through my little trial was the 2016 Smith-Madrone Cabernet Sauvignon, one of the better Cabernets in its price range ($58).

Crisp & Fresh: Interestingly, this Cab seems a bit hot and disjointed on the nose. Having tasted this wine with Stu Smith earlier in the day, I was astonished by this as it was certainly not the case when I chatted with him. The palate, though, is much as I remember it from earlier.

Creamy & Silky: The heat is (miraculously?) gone replaced with lovely red and dark berry fruit, with some forest floor. Lovely, with little difference on the palate.

Bold & Powerful: While the aromas in the Creamy & Silky glass hold true here as well, there is more depth with a richer forest floor and a hint of greenness (olive? pepper?) that I love and adds to its allure.

Analysis: As expected, the Napa Cab showed best in the Bold & Powerful glass, which accentuated the strengths of this wine (and minimized the affects of alcohol, although at 14.3% I would not call this “high alcohol”).

I have been an occasional cycling tour guide in Europe for the past 20 years, visiting most of the wine regions of France. Through this "job" I developed a love for wine and the stories that often accompany the pulling of a cork. I live in Houston with my lovely wife and two wonderful sons.
View all posts by the drunken cyclist →
This entry was posted in Cabernet Sauvignon, Chardonnay, Riesling, Wine. Bookmark the permalink.