This is another article in the series about my travels with my son, Nathan, and visiting prospective colleges. He applied to thirteen schools, only three of which he had actually visited (and those were three of the the five where he was rejected or wait-listed). He was accepted at eight of those schools and I insisted that he could not actually attend a school that he had not physically visited.

Thus, we had a scant few weeks to visit six schools (he eliminated two of the schools he applied to right away). We visited University of Texas-Austin a few weeks prior two weeks ago, I posted about the first couple of days in California with a visit to UCLA, our ever so brief “visit” to the University of California at Santa Barbara, our tour of Cal Poly San Luis Obispo, and last week, our drive through Big Sur.

Having already visited schools on the East Coast, in California, and in Texas, Nathan and I had one last trip: the Midwest. This was the trip that I was least looking forward to since I grew up in that part of the country and, well, let’s just say many years ago, I chose to no longer live there.

There were but two schools on the docket, but they are too far apart to make driving very practical. So we decided to first fly to Cleveland to visit Case Western Reserve University and then hop on another plane down to Missouri to see Washington University in Saint Louis.

The plan was to pick up Nathan directly from school, head straight to the airport, arrive in Cleveland in time for dinner, and then visit Case the following day. We actually had an in-person tour arranged, which was the only personal tour of campus we had on all of our visits (excluding the tour given by his cousin at Cal Poly where she actually did an excellent job).

This was the end of April and while it was in the mid-80s in Houston, that was not the forecast for either of the two cities on our agenda. Cleveland was forecast to be in the high 30s and Saint Louis only slightly warmer. Sitting there in the airport, waiting to board, I look at my son who is dressed as if he were ready to go to the beach.

Since we had some time before boarding, I asked him if it might not be prudent to change into some warmer clothes given the weather at our destination. “Nah, I’ll be alright, you brought my sweatshirt, right?”

Ignoring for the moment that the sole piece of “warm clothing” he decided to bring was a sweatshirt, I addressed his question thusly: “What sweatshirt?”

“The one that was next to my suitcase.”

What followed was, hopefully, a bit of a life lesson as I explained to him that suitcases were actually made to carry clothes. A sweatshirt is an item of clothing. Therefore, you should have put the sweatshirt in the suitcase if you wanted to bring it. How was I to know that I was expected to gather up said sweatshirt and bring it to you?

He, of course, disagreed, and found it perfectly logical that I should have assumed that I was to bring said garment since it was in close proximity to his suitcase. Under that logic, I pointed out, I would have brought far more than a single, flimsy, sweatshirt since there were any number of items near his suitcase when I picked it up.

At an impasse, I decided to go looking for something, anything, in the Houston airport that could provide a modicum of warmth for my son when we landed in Cleveland facing barely above freezing temperatures. This was the best I could do:

It was slightly thicker than the undershirt I was wearing, but it would have to do. I purchased the item and brought it back to the gate, where he tried it on. Let’s just say it was a bit small–a straight jacket would have been considered “roomy” compared to this thing. So I returned it, which left my son not only with no jacket of any type, but no shirt (sweat or otherwise) to cover his arms.

And this kid is going to college in the fall.

I lent him one of the two sweaters that I had packed and despite his dismissal of it as a “dad shirt” he reluctantly accepted it.

We arrived in Cleveland, took an Uber to the hotel, and headed out searching for a restaurant. The Little Italy section of Cleveland was within walking distance of our hotel (which was, essentially, on campus), so we headed there, where I found a restaurant with a decent wine list.

We sat down, quickly ordered, and I asked for a bottle of the Anselmi San Vincenzo, a Garganega from the Veneto (it is, essentially a Soave, but Roberto Anselmi opted out of the appellation several years ago due to his frustration with the inferior quality of many of the wines from the region). The server looked at me as if I had two heads.

“No one has ever ordered that before.”

I knew there was a reason I left the Midwest.

The following day we visited campus and had our tour. To say that the tour guide was  “rather uninspiring” would be akin to saying the pope was “rather religious” but the campus was compelling and Nathan seemed impressed. The tour guide did point out, however, a restaurant on campus that she highly recommended.

After a bit of research, the place she suggested, L’Albatros, not only had a curious name (“The Albatross”) but it also had a fabulous wine list. Yeah. So they only could take us at 9:00, who cares? (Well, actually my son–he was starving but after learning of what he did not pack, I decided he did not get a vote.)

That evening, I talked him into getting the cassoulet (when he said that he had never had one, I considered that a failing as a parent and insisted he order it) and I ordered the choucroute (the specialty of Alsace where I studied in college). I also ordered a lovely bottle of 2018 Albert Mann Grand Cru Pinot Gris which was slightly sweet, but of so delicious (the choucroute, on the other hand, was just average, I have to say). 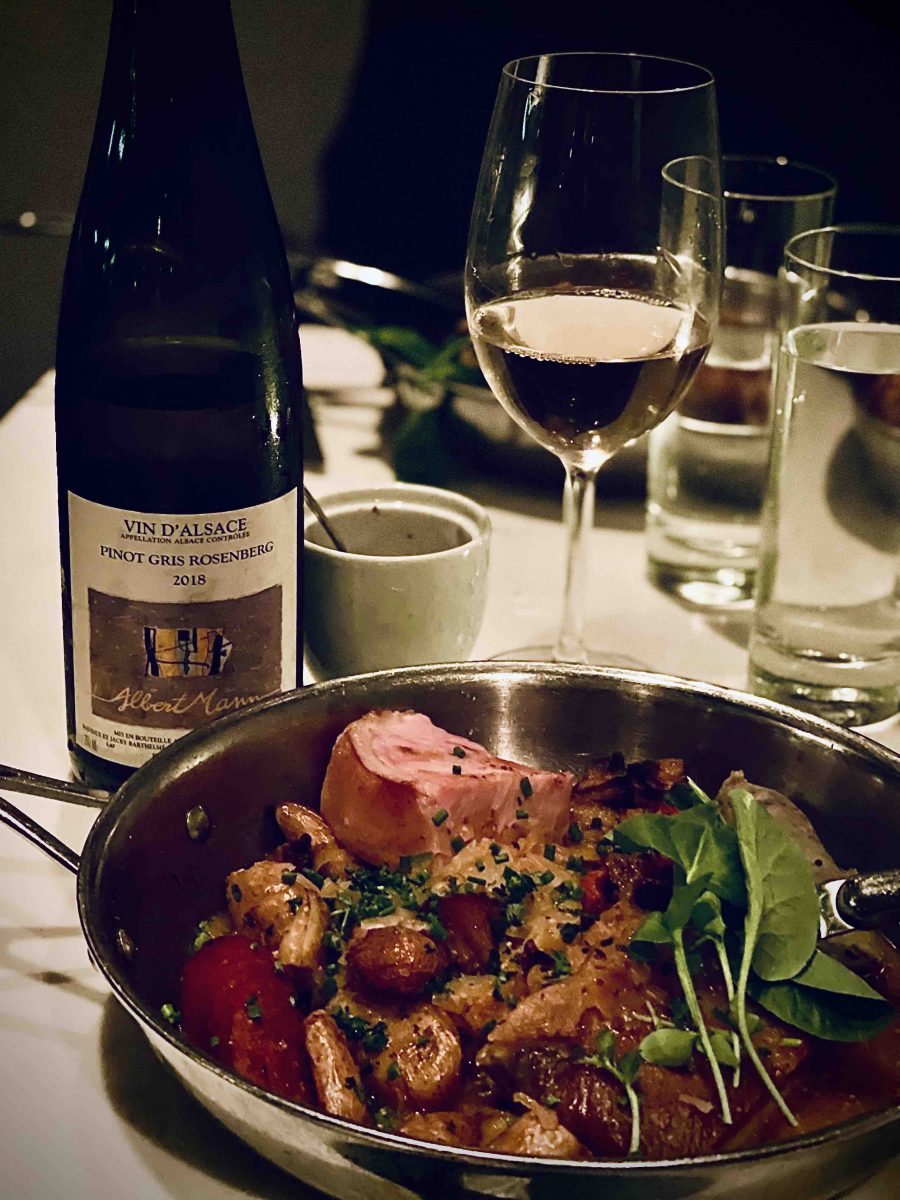 Over dinner, my son indicated that Case Western was now solidly in contention (which had nothing to do with the cassoulet). In fact, he placed it at the top of the list, including ahead of my personal favorite, Cal Poly, which meant I had to adopt a new mantra (“This is not about you, this is not about you”).

The good news was that Case had offered him a considerable amount of money in academic scholarship to attend the school, roughly cutting the cost of attendance in half. The bad news was that we still had to visit Washington University, which had offered no such scholarship meaning we would have to foot the entire bill of over eighty thousand dollars a year (quick math: that’s a quarter of a million dollars over four years).

We got into Saint Louis and took the train downtown. Coincidentally, our hotel had its own train stop, which was good, since we were both tired and hungry (it turns out the train station was there for Busch Stadium, home of the Cardinals, which was literally across the street from our hotel). Probably due to the fatigue and hunger, my son and I got into a big argument upon arriving at the hotel (the source of which neither of us no longer remember), and I headed off to dinner on my own (but would end up bringing him back a takeout sandwich from the restaurant).

I settled on Bridge Tap House and Wine Bar, which was a 10 minute walk from the hotel. Fabulous. While the wine list was not extensive, it was excellent, and I settled on a 2018 Firriato Le Sabbie dell’Etna Bianco, a white wine from the slopes of the Etna volcano in Sicily, made from Carricante and Catarratto, two of the main white varieties of the island. I paired it with Bridge’s interpretation of a Cuban sandwich and both the wine and the food were divine.

I got back to the hotel, apologized to my son, and we both agreed to make the best of the following day.

I passed this on the way back to the hotel.

Wash U is simply a beautiful campus. In fact, if Disney were to construct a “model college” I imagine it would look a lot like Washington University in Saint Louis. Curiously, the day we visited campus (they provided us with an unguided walking tour), the weather was perfect: 70 degrees and sunny, which only added to its allure.

But for my son? It was a bit too perfect. He is a cargo shorts and untucked t-shirt kinda kid while everything and everyone at Wash U seemed to be perfectly in its place, tucked in and tidy. So even though it was impressive, it was off the list.

That afternoon, we had a rather fun day in Saint Louis, however, visiting the arch (Nathan is terrified of heights so we did not go in the arch), and walking around Busch Stadium, where we also ate one of the least inspiring meals I have had in a long time (the wine list consisted of “red” or “white” so I had a Budweiser–when in Rome…). 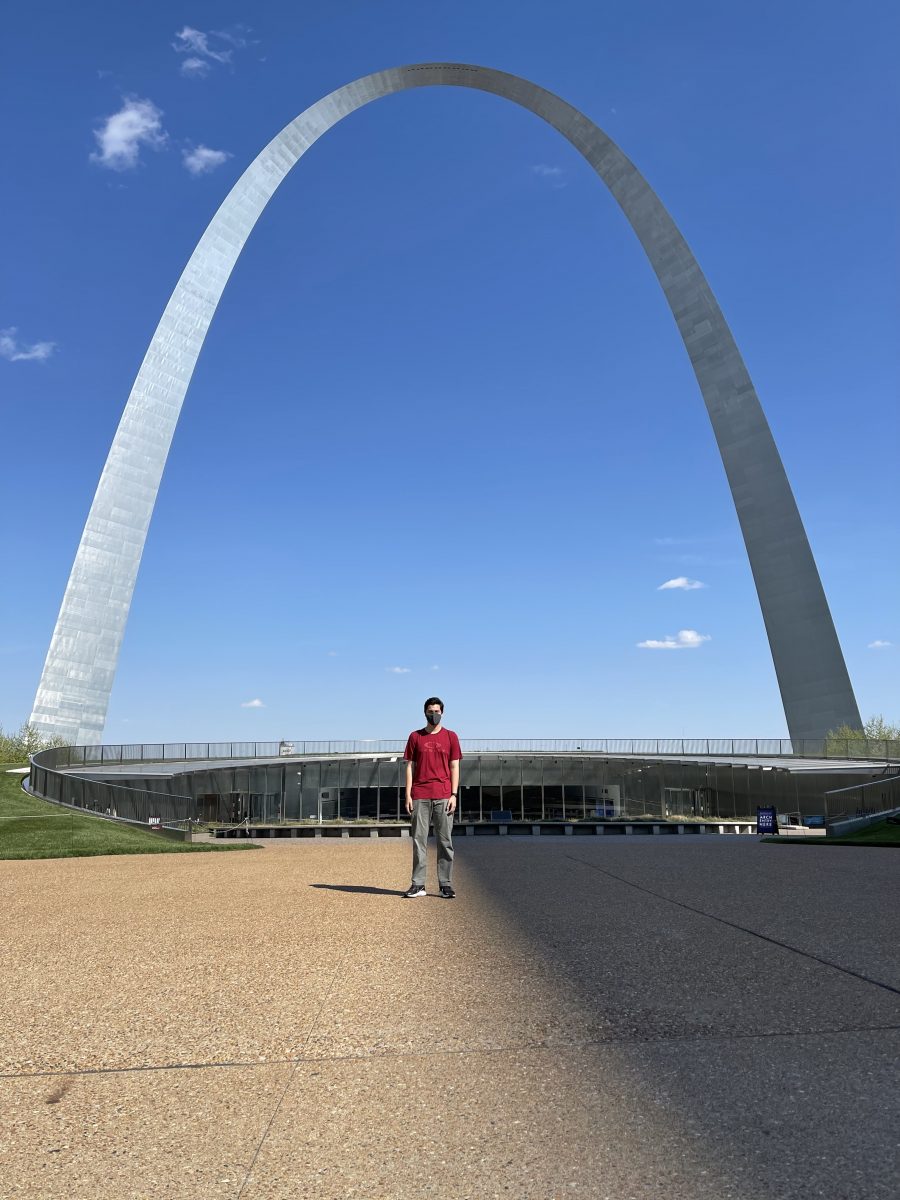 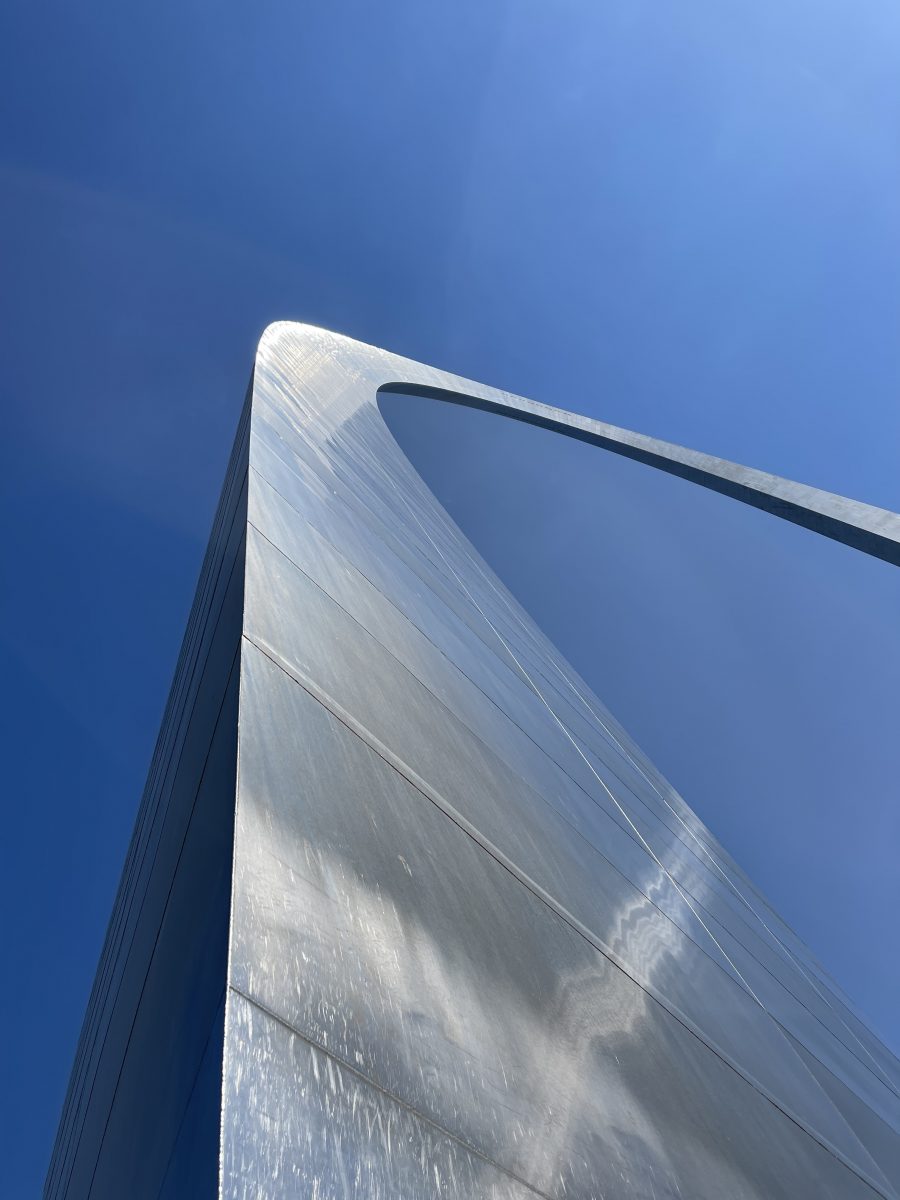 After dinner, still a lovely evening, we agreed to duck into an open air bar by our hotel to watch the 76ers game. I was also able to find this, a wonderful Chardonnay made by none other than James MacPhail, one of my favorite winemakers and a buddy of mine (I think). Fantastic (although the Sixers lost): 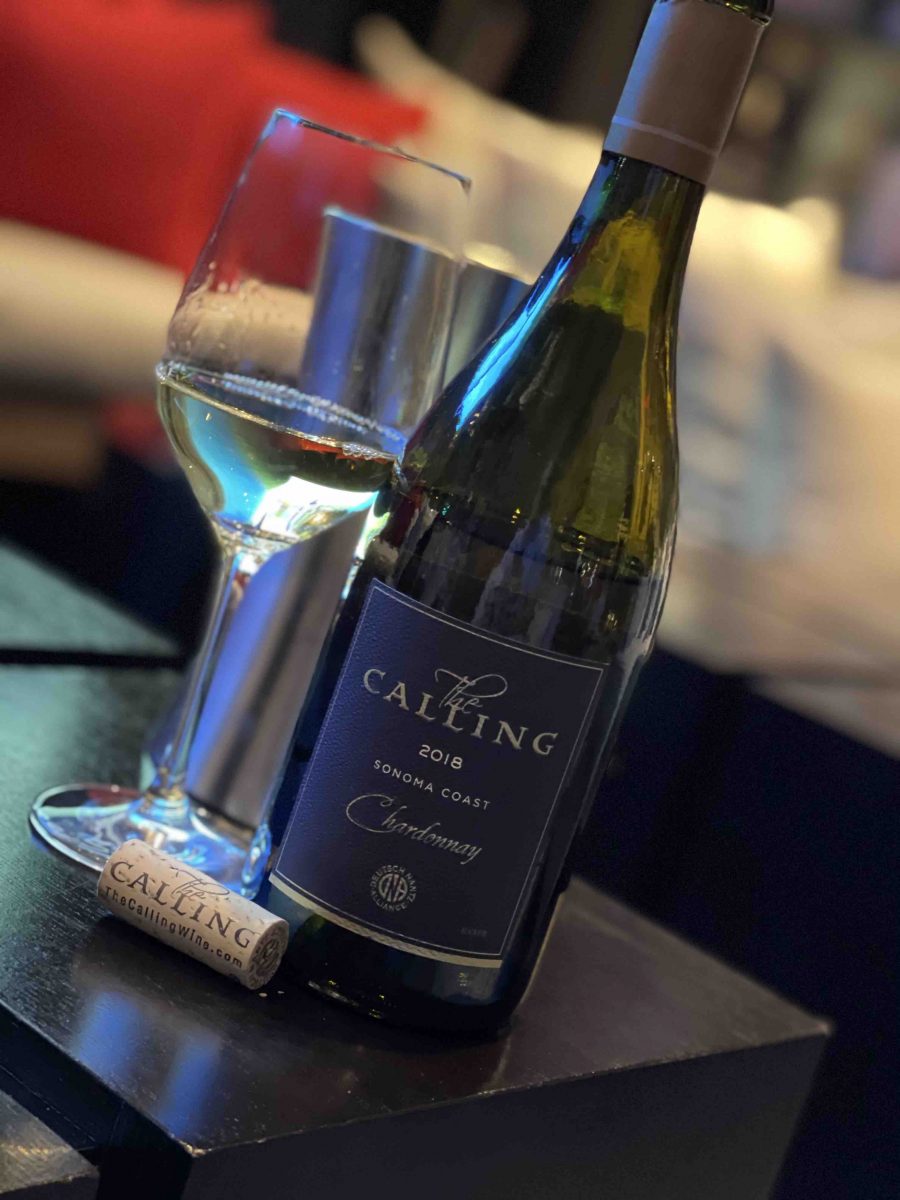 The following day, we were headed back to Houston but the Midwest gave us one last parting shot.

I post this photo not so much to show the view from our hotel, but if you look closely, you can see little white particles falling from the sky.

Yes, following a day in the 70s, it snowed in Saint Louis, so much so that our flight was delayed a good hour as they de-iced the plane.

None of this swayed my son, who claims to be a “northern kid” and does not fear winter. And thus, after a few more days of contemplation, a finally lobbying effort by me to reconsider Cal Poly (“It’s not about me, it’s not about me”)he eventually decided to matriculate at Case Western Reserve University in the Fall.

He is very excited and we are excited for him (but we will not be visiting in the winter, that is for sure).

I have been an occasional cycling tour guide in Europe for the past 20 years, visiting most of the wine regions of France. Through this "job" I developed a love for wine and the stories that often accompany the pulling of a cork. I live in Houston with my lovely wife and two wonderful sons.
View all posts by the drunken cyclist →
This entry was posted in Family, Travel, Wine. Bookmark the permalink.

1 Response to Looking for Wine on College Tours—Cleveland, St. Louis, and Decision Time