The Glass of Wine I Just Could Not Drink

Even for the casual observer of this blog, I think it is pretty clear that I am no fan of the repost. I am not sure why that is, but I think it stems from the fact that I prefer to write new material instead of rehashing previously published material (with the notable exception of Sundays Are For Sebastian). This week, however, I have decided to set aside that predilection. After roughly sixteen months of not leaving Houston, I have been on the road for a solid two weeks with another yet to come. First, I was out in Oregon, riding my bike, visiting some wineries, and then attending the Wine Media Conference in Eugene. This week (and next) I am driving up to Cleveland (and then back) to drop my son off at Case Western Reserve University for his first year of college. Yeah. As such, I have had very little time to write, thus the reposts.

This first repost comes from a handful of years ago and garnered a bit of recognition. I chose it since I ran into Janie Brooks again at the Wine Media Conference, where she was representing her winery as on of the Conference’s sponsors.

There I sat, with a healthy pour of Pinot before me, unable to move, unable to even try the wine, as I tried to grasp the enormity of it all.

I think it is clear for any frequent (or even casual) reader of this blog that I drink more than my fair share of wine. I try to drink good wine all the time and great wine at least some of the time. I also throw back quite a bit of mediocre wine—one of the hazards of the “job” so to speak.

Rarely (never?), however, do I find myself in a position that I literally freeze and can’t bring myself to consume (or at least try) the wine before me. Well, exactly that occurred a few months ago and ever since I have been struggling to find the right prose to express how I came to that point.

It was this past summer and I was on a press trip with three other writers to the state of Oregon. We had started near the southern border with California and traveled up the coast, culminating in Portland, expending nearly a week on the journey. Before we landed in the state’s largest city, though, we stopped in the glorious Willamette Valley for a few nights.

On one of those nights we were guests at Brooks Winery, which despite its fairly modest production (about 12,000 cases), it casts a fairly large shadow over the Valley. Yes, the wines at Brooks are fantastic, but it seems clear even for the casual observer that Brooks’ influence surpasses the wines that they pour from their striking (and fairly new) tasting room.

No, it seems as though Brooks’ lasting influence on the Willamette Valley stems largely from the winery’s founder, the inimitable Jimi Brooks. Jimi founded the winery in 1998, and died just six years later, in 2004, from an aortic aneurysm in his home at the age of 38.

So I sat, not even swirling the wine, trying not to get enveloped by the emotion of the moment. The others, who were happily downing their glasses, surely noticed. I am not the overtly dramatic type, but there I sat, not moving, not talking, and not drinking. 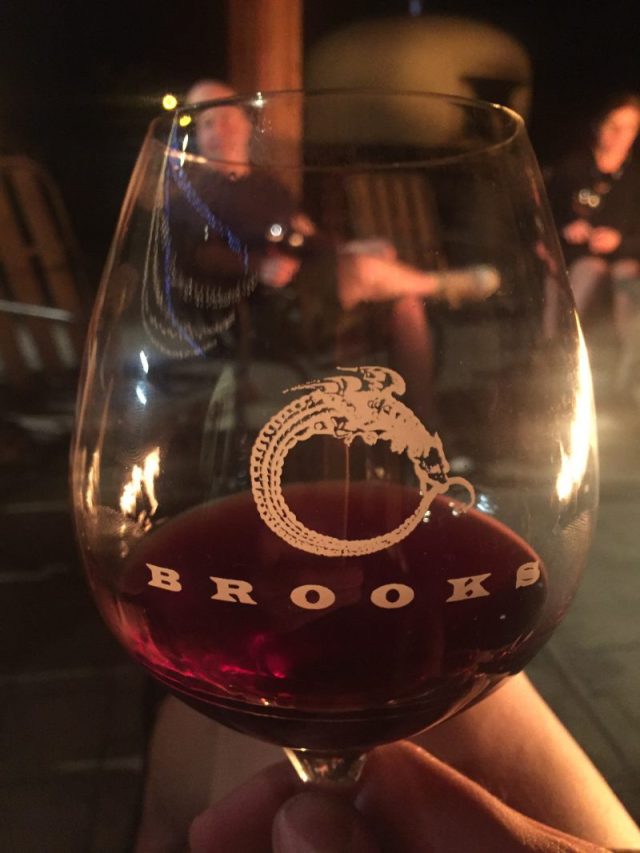 Glass in hand, not drinking.

A short time prior to visiting the winery, I watched, by chance, the documentary film American Wine Story, which chronicles the inspiration of several winemakers and why they left their relatively stable lives to pursue the volatile world of grape growing and wine production.

“Most Americans aren’t born into the industry…they’re pioneers who discovered wine in the unexplored parts of themselves. And for most, before they abandoned a career, mortgaged a house, maxed out a credit card, their stories began with an epiphany, a precise moment when they understood that every bottle of wine contains a little bit of magic.”—American Wine Story.

Although the film weaves in and out of several regions and perhaps a dozen individual histories, the main focus is on Jimi Brooks and Brooks Winery. By all accounts, Jimi was somewhat of a galvanizing force in the region; his alluring personality drew people toward him, and nearer each other in the process.

“I guess everyone knows each other…it’s not that big of an industry. But it was surprising to me that he really did know everyone, and not in just a superficial way. He helped draw a lot of people together… there are a lot of good friends who are friends because of Jimi. He was the magnet and the cement at the same time.”—Tad Seestedt, Ransom Wines & Spirits

I never met Jimi Brooks, but I am pretty sure I would have liked him: he had a passion for wines, history, and philosophy, and many across the region saw him as an inspiration. Chris Williams, for example, the current winemaker at Brooks, got into the industry not so much out of a love for wine, but out of a “passion for [Jimi] I really liked him as a person…everything I was learning was from Jimi, and it was really about feeding off his passion.”

As I sat, untasted wine in hand, I thought about many things: Jimi Brooks, who was born just a few months before I was, people I knew who passed away, others that likely soon will pass. And I thought about the incredible ability of wine to conger up such powerful memories and thoughts. 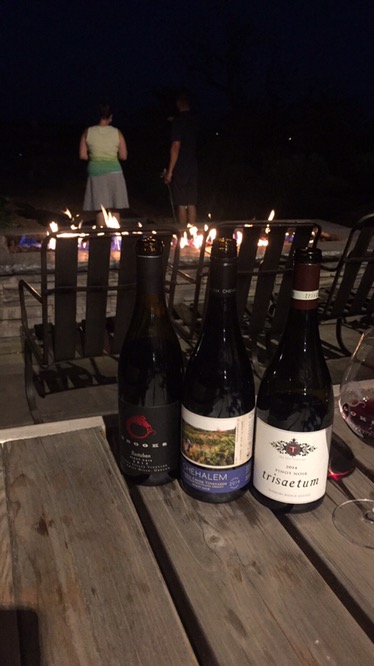 Plenty of wine by the fire at Brooks.

Just a few days before harvest, Jimi died, and upon hearing the news, his sister, Janie, immediately left her home in Southern California, arriving at Jimi’s house late that night. There, she found the house filled with dozens of people most of whom she didn’t know including many winemakers from the region. She was led into the living room where a group of Jimi’s friends had assembled to explain to Janie how they were going to get through harvest.

“So several of us said: ‘Let’s make it for Jimi. He’d want us to do this.’” —Harry Peterson-Nedry, Chehalem Wines.

Over the course of the day, before Janie had arrived, a full group of winemakers had decided who would take which fruit as they wanted to make Jimi’s wine as a tribute to the man who had meant so much to all of them. They thought what Jimi was doing—a holistic approach to winemaking that focused on the unique qualities of the region’s terroir and his passion to produce expressive and complex Riesling and Pinot—was incredible and it needed to continue. 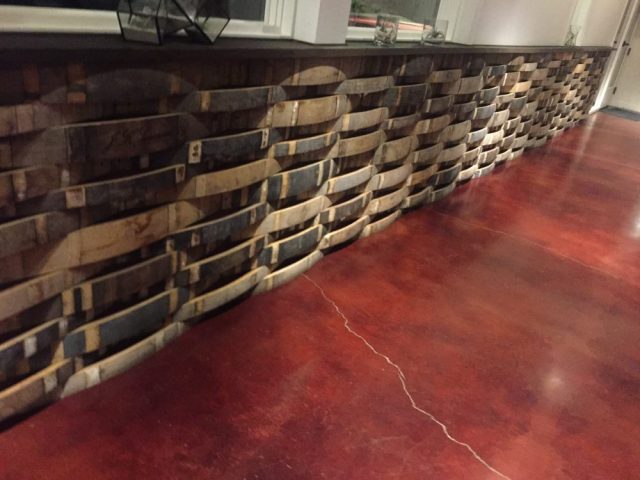 The barrel wall that honors all those producers that came together to help with the 2004 harvest after Jimi’s death.

The group, each with their own winery to run, could not handle the business side of the endeavor, though, so they asked Janie, who had a business background to handle the finances.

“Once someone is dead, there is really nothing you can do for them, but you can do something for their family.”–Tad Seestedt, Ransom Wine and Spirits. 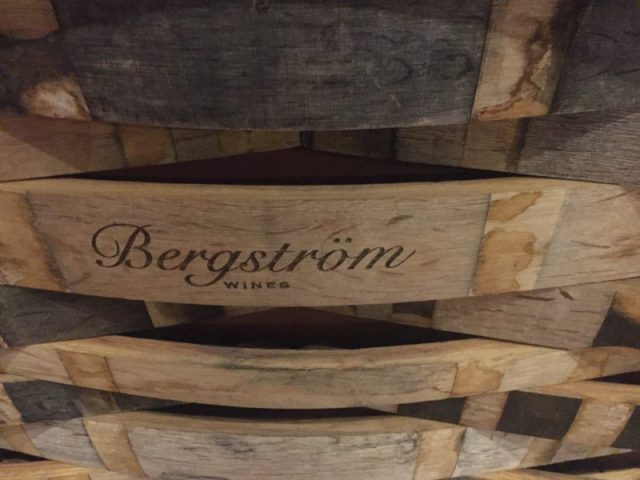 An individual stave from Bergström.

Janie remembers reading in the Atlantic Monthly about a month before Jimi died that he wanted the winery to be a family legacy that he would pass down to his son. She took that as a sign that he was leaving her a message in a way, which encouraged her to take over the business and preserve it for Pascal, his elementary aged son. There were several rather large problems, however. First, Janie had a family and a life of her own in Southern California, and second, as she put it herself, “I didn’t have any idea what I was doing.”

As I continued to sit, my thoughts drifted to my own sons, wondering what would happen to them if I suddenly were no longer there. Had I prepared them enough for their life journey? Would they remember me fondly? Would they be O.K.?

So she called around to several of Jimi’s accounts and distributors to try to understand  what her brother was doing that was so unusual and had garnered such admiration, even adoration. After considerable deliberation, she decided to take it on, to preserve Jimi’s legacy. Not only has the winery been successful (going from 3,000 cases to over 12,000 now), running Brooks has enabled Janie to keep Jimi somewhat present, as she is constantly surrounded by people who knew and loved her brother.

After the service, which was held at Jimi’s house, Sam Tannahill approached Janie, who was surveying the crowd: “Do you understand now? Do you see how important Jimi was to all of us?”

“I feel like he’s teaching me things. I feel like this whole experience has been a: ‘You know little sister, you need to get more passionate about what you do and live for the right reasons.’”—Janie Brooks Heuck

We had tasted countless of bottles of wine that night already, so why was I so hung up on this particular glass? We were staying on the property, so after dinner, Janie invited us over to the winery and offered to open a few more bottles to enjoy by the fire. Then she disappeared and brought out one more, a 2004 Brooks Willamette Valley Pinot Noir. 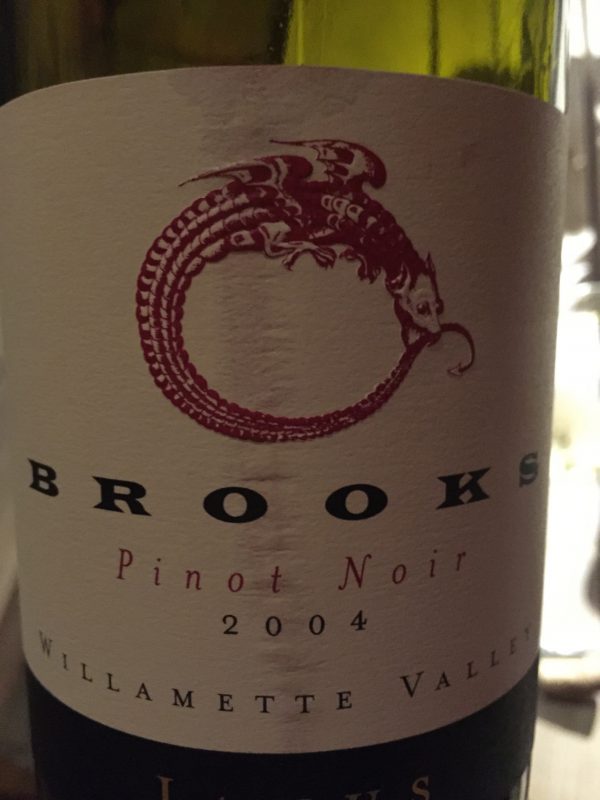 I shot Janie a rather inquisiting look and she simply nodded; this was a bottle of that wine, the wine that the community came together to make after Jimi’s death. Here in my glass was an outpouring of love and respect for Jimi Brooks, a vintage that he started but that the incredible community that he built finished.

While others perhaps saw it as just another glass of wine, I could not help but think what all this bottle, this wine represented, and it was too much to handle.

As for the wine?

After about twenty minutes, I took a sip. At that point it really was no longer about what was in the glass, but rather all that had transpired outside the bottle to ensure that what made it under the cork was a true representation of the man who had inspired so many.

But yeah, as I think Jimi might have said, “it was fucking good.”

I have been an occasional cycling tour guide in Europe for the past 20 years, visiting most of the wine regions of France. Through this "job" I developed a love for wine and the stories that often accompany the pulling of a cork. I live in Houston with my lovely wife and two wonderful sons.
View all posts by the drunken cyclist →
This entry was posted in Oregon, Pinot Noir, Wine. Bookmark the permalink.