Posted on September 21, 2021 by the drunken cyclist

Since we moved to Texas just over five years ago, I can count on one finger the number of times I’ve heard “Everything’s bigger in Texas.” Even though I heard it hundreds (thousands?) of times growing up and as an adult, it just isn’t a phrase that you hear all that often down here.

Don’t get me wrong, it isn’t because it isn’t true, I just guess Texans are rather sick of it. The saying has not altered their behavior, though. From steaks and pork chops to highways and churches, it seems everything down here is huge. At Whataburger, the Texas fast-food burger chain, the large soda contains enough liquid to extinguish a pretty healthy sized fire.

Then there are the vehicles. Holy crap. Just about every domestic manufacturer makes their most popular pick-up truck with a “Texas Edition” option. As far as I can tell, that simply means that is it likely designed to be as large as allowed by law. Those things are enormous and usually driven by a guy (most drivers of pick-ups are men while women prefer SUVs–I am not trying to start a dialogue on sexist stereotypes, just making an observation) who is slightly below average height.

Speaking of SUVs, those are ridiculously large as well. There are few, very few, of the “smaller” SUVs on the roads of Houston. Nope, the models of choice, the Chevy Suburban, Cadillac Escalade, Ford Expedition, are large enough to fit seven or eight people fairly comfortably. Usually, however, they only contain a rather petite 30-something and two kids under the age of puberty on their way to soccer practice.

I shudder to think how much Texans have contributed to the global heating crisis that we now face.

Having said all of that, I was pretty happy that none of my neighbors saw me several weeks ago when I took part in the Vins d’Alsace Digitasting, an event with dozens of producers over the course of three days. I signed up to meet with ten producers over the three days (two were no-shows), with each winery slotted to send me four wines which we would talk about, one-on-one over Zoom (or one of the Zoom-like equivalents).

When I signed up, I thought I would be getting 40 bottles of phenomenal wines from perhaps my preferred wine region in France (after Champagne, of course). There would be now way that I would be able to finish all the bottles, but I had planned to  disperse the remaining wine to several of my neighbors in the hope of becoming one of the “cool kids” on the block.

Well, what showed up on my doorstep were ten boxes, each containing four mini (and I do mean mini) bottles (vials, really) containing 30ml, or just a hair over an ounce, of wine. Initially, I was more than a bit perturbed. As I have stated on countless occasions, I like to taste a wine several times over the course of at least a couple of hours before making any sort of assessment as a wine evolves considerably once it is exposed to air.

That would not be happening here as an ounce is barely more than a sip. It is a standard shot glass.

I also started to think about how it would look if my neighbors saw me, I mean, here I am, the local “wine guy” tasting wine from bottles that were actually smaller than those tiny liquor bottles on airplanes (those hold 50 ml or about 1.7 ounces). I mean, I was already looked down upon (I imagine) for driving a Prius, if they saw me with these bottles, it would be as if I started driving around the ‘hood on one of these: 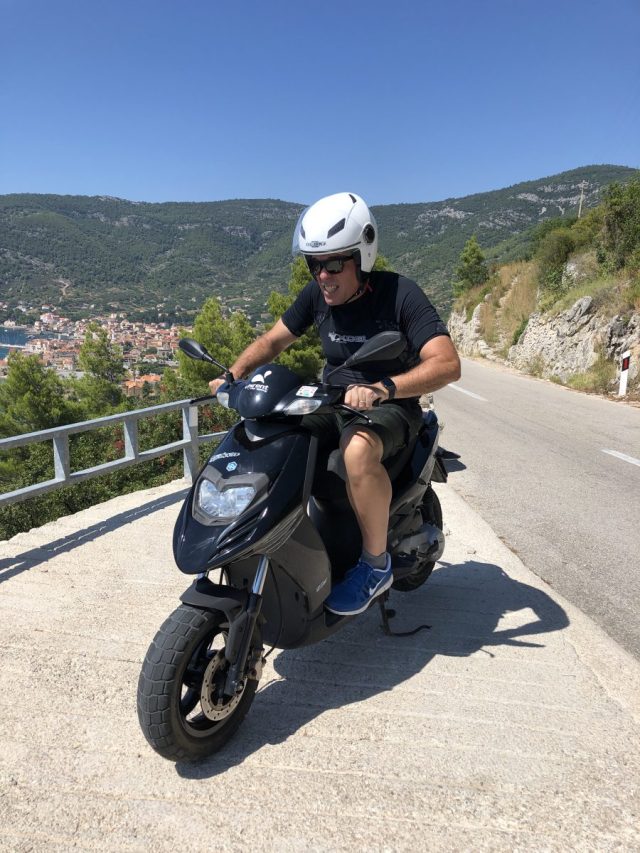 Thus, to avoid ridicule I tasted the wines quietly, with no fanfare nor any mention to the outside world. Until now. Why now? Well, much to my amazement (I thought transferring the wines into the tiny bottles would be disastrous), all the wines showed really well and deserve good press, no matter how rediculously smalll the bottles were.

[Note: the tiny bottles were only for the tasting, they are not, as far as I know, available commercially.]

I wrote about the first two wineries I “visited” a few weeks ago, and here is the next installment.

On the second day of the tasting, I had three tastings lined up and they all, once again, went off without a hitch. The first was Famille Dietrich which is located in the tiny hamlet of Dambach-la-Ville, a town I know fairly well since the bike tour I used to lead through Alsace had a critical turn in the town which I missed fairly often, which would result in having to ride for far more kilometers than I would like on a fairly busy highway. Perhaps more exciting than the memories evoked was the fact that one of the tiny 30ml bottles included in the Dietrich box was a Grand Cru Muscat! While once fairly common in the region, the area devoted to the aromatic variety has diminished precipitously over the past several decades to the point that it represents less than two percent of Grand Cru production. First up was the 2018 Riesling Granite (89 pts.): The wine is made only from grapes that were grown in the granite soils from the hillsides that surround the town. 20 hectares total. Clean and direct with 4g/l RS.  A very nice, every day wine. Next was the 2015 Riesling Lanzenberg Lieu-Dit (91 pts.): Golden, a little oxidized, but really rich. Candied fruit, lovely nose. A really small production of only 2,500 bottles. Rich, lovely. Nice and slightly sweet but only 5g/l. The 2016 Muscat Frankstein Grand Cru (96 pts.) was completely dry, but has an incredibly sweet nose. So little Muscat is made any more in Alsace. The palate is something rare and refined. I do not know whay they do not make more of this variety as this wine was phenomenal. Last, the 2016 Pinot Gris Frankstein Grand Cru (94 pts.) was a bit closed on the nose, but plenty of fruit on the palate with some sweetness (20g/l). Very nice. The winery also produces a Pinot Noir called simply “F” since it comes from the Frankstein (Grand Cru) vineyard. Pinot Noir in Alsace is not (yet?) afforded Grand Cru status, but many think it will be soon (eventually?). Sadly, this was not included in the kit, but given the quality of the wines that were? I’d place a healthy wager that the Pinot Noir is phenomenal. 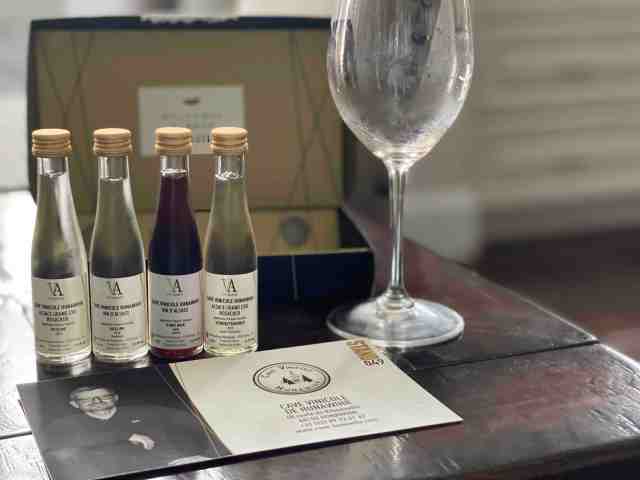 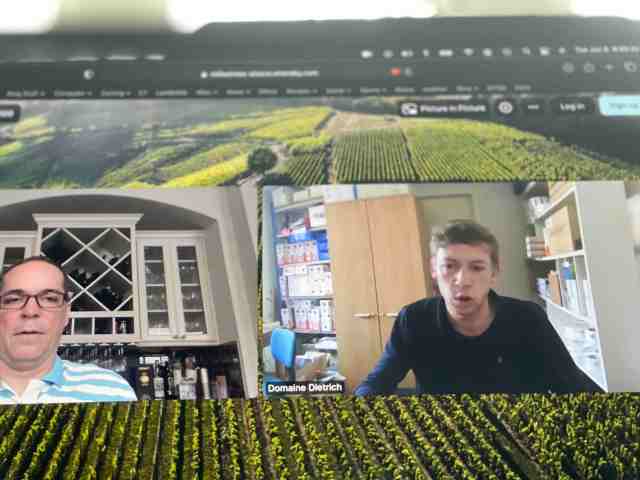 Next up was the Cave Vinicole de Hunawihr, a cooperative in the tiny hamlet of Hunawihr, which is nestled between the two picturesque towns of Riquewihr and Ribeauvillé. While the other two see much more tourists, Hunawihr is perhaps my favorite of the three as it is often far easier to experience a tiny village without the throngs of tourists.

During the Second World War, nearly everything was destroyed in the region, so many cooperatives were established with this one established in 1954. Since the beginning, members of the co-op have been treated very much as a family, which continues today, as the third generation is now running the company. There are roughly the same number of members since the beginning, and in the last few years the number of members have actually increased around 15%. The 2018 Riesling (91 pts.) is clean and focused on the nose with some spice. Rich and luscious on the palate, very nice and just a hint of sweetness. Next, the 2019 Grand Cru Rosacker Riesling (92 pts.) was bigger and more focused with plenty of spice. Out of a total of 24 hectares the Coop has 17 in the Rosacker, which also boasts the famed Clos Ste. Hune. Quite tart. Lovely. About 40,000 bottles. The 2018 Cuvée 8 Pinot Noir (92 pts.) was aged in oak barrelsand includes only the best Pinot, from 8 growers (hence the name). Rich and full-bodied, but also tart and acid-focused. Very nice. Last, the 2019 Rosacker Gewurztraminer is a tad sweet (14g/l) and is floral, spicy, with just the right amount sweetness. Very nice. 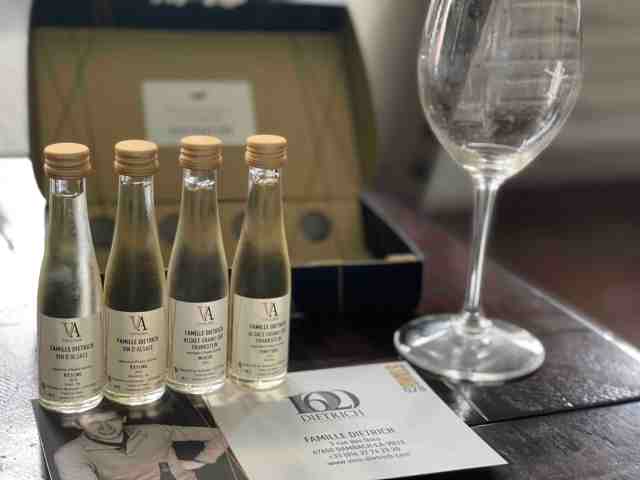 I have been an occasional cycling tour guide in Europe for the past 20 years, visiting most of the wine regions of France. Through this "job" I developed a love for wine and the stories that often accompany the pulling of a cork. I live in Houston with my lovely wife and two wonderful sons.
View all posts by the drunken cyclist →
This entry was posted in Alsace, Gewurztraminer, Pinot Gris, Pinot Noir, Riesling, Wine. Bookmark the permalink.