Posted on September 26, 2014 by the drunken cyclist

I pulled into the driveway where the only sign along the Dry Creek road read “Tzabaco Vineyards” with no mention of “Estate 1856”–my afternoon appointment. Moments after pulling in, I was greeted by Janice Schmidt, the wine maker half of the Estate 1856 team–her husband, Brian, farms the land.

A quick primer on the names. The vineyard was originally a part of the 17,000 acre Tzabaco Rancho Mexican land grant in 1843, and Brian’s great-grandfather, D.D. Phillips bought just over 137 acres from the original land grant recipients in 1856 and six generations of Brian’s family have since been raised on the land.

Estate 1856 is tiny–it produces 300 cases of mostly red right now, with the three bottles I tasted below the bulk of their production. They also make a Petit Verdot and a Malbec, though, and there are thoughts of making a white or two since they grow Sauvignon Blanc, Chardonnay, and Viognier in their vineyard.

Even though they only have a few vintages of Estate 1856 behind them (the first was 2008), Janice has considerable experience, having worked at Jordan Winery for twenty years under their legendary wine maker Rob Davis and the über-legend André Tchelistcheff, who was a consulting wine maker at Jordan for a period during Janice’s time there. 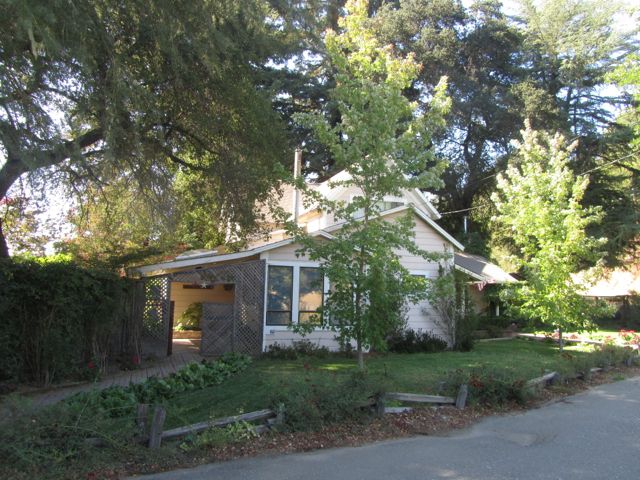 The family home–where we tasted the wines–has been in the family since the purchase of the property in 1856, with each successive generation constructing their own addition.

As Janice and I were talking about wine, kids, life, I realized that I use the word “passionate” far too often to describe people. But then I got to thinking about other winemakers and I realized that every one that I have met could be described as such. [I decided if there is a winemaker that can’t be characterized as “passionate”, well, I would rather not taste his or her wines.]
I would also use the word “intense” to describe Janice, although without any of the negative connotations that the word now seems to have–Janice clearly knows wine, and seems eager to share that knowledge. She considers every aspect of winemaking carefully and precisely, always singularly focused on what is going to end up in the bottle.
As an example, Janice is acutely aware of alcohol levels. While she wants to allow the fruit to hang as long as possible (as sugar levels increase in the grape, so do the flavors in the resultant wine). The key, as she put it, was knowing when “to call it quits” and pick the fruit. Although the Estate 1856 wines I tried all show incredible fruit, she has no desire to create big, giant wines that also have high alcohol levels to match.
Janice is not afraid to go a bit against the tide either. While most wineries today seem to embrace cool or even cold fermentations, Janice conducts her fermentations at 95 degrees–she states that the warmer temperature serves to both better coax the flavors out of the skins and encourages some of the resultant alcohol to burn off.
Janice opened three wines and poured, but we did not taste right away–in fact, we waited close to twenty minutes before taking a sip, periodically returning to the wine for an extended sniff to monitor the progress. 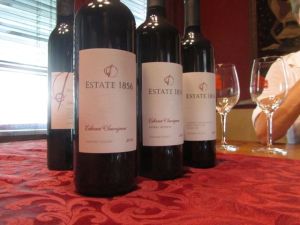 2011 Estate 1856 Bordeaux blend: Retail $38. 76% Cabernet Sauvignon, 12% Petit Verdot, 12% Malbec. Great Bordeaux-style nose right out of the bottle with a bit of dark red fruit and just a hint of green pepper. As it opened, there was more black pepper and spice. After 15 minutes we tasted. Wow. Rich and full without being over bearing at all. Lingering aftertaste that cries out for more exploration. The only problem? Only available through the wine club. Outstanding. 92-94 Points.
2011 Estate 1856 Cabernet Sauvignon: Retail $32. 97% Cabernet Sauvignon. 3% Petit Verdot. Deeper red fruit nose no green pepper.  Which elevates the aroma in her opinion. Another wow here. Perhaps not as rich as the Bordeaux Blend, but fantastic and at the price? Wow. This might be too good for your in-laws but certainly at an in-law price. Outstanding. 91-93 Points.
2011 Estate 1856 Cabernet Sauvignon Barrel Reserve: Retail $42. 98% Cabernet Sauvignon, 2% Petit Verdot. Janice was not sure if they would do a barrel reserve in future years again. Just in that year there was a really great barrel that she wanted to showcase. Just a hint of vanilla here from the additional oak. On the palate. Wow. I have said that a lot here but this is kind of crazy. Outstanding. 92-94 Points. 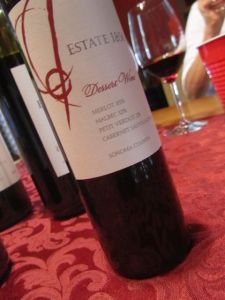 NV Estate 1856 Dessert Wine: Retail $30. The dessert wine is essentially a combination of two vintages: some 2007 Merlot was sent to a distillery and then added to a field blend (mostly Merlot and Malbec with splashes of Petit Verdot and Cabernet Sauvignon) of 2008 fruit. The resultant wine has a beautiful ruby color with fine red fruit nose. Exactly what you want in a dessert wine: sweet without being cloying. 17.4% alcohol. Outstanding. 90-92 Points.
I do not say this all this often, so pay attention: If you were ever considering joining a winery’s wine club, this should be the one for the sole fact that you would then be able to purchase the Bordeaux blend.
Yes, it is that good.

I have been an occasional cycling tour guide in Europe for the past 20 years, visiting most of the wine regions of France. Through this "job" I developed a love for wine and the stories that often accompany the pulling of a cork. I live in Houston with my lovely wife and two wonderful sons.
View all posts by the drunken cyclist →
This entry was posted in Bordeaux, Cabernet Sauvignon, Wine. Bookmark the permalink.