Posted on September 14, 2015 by the drunken cyclist

Over the course of a week, I taste a bunch of wine, usually with friends, and almost always with my wife.  Here are some of the wines we tasted over the past few weeks:

2009 Domaine Drouhin Arthur Chardonnay: Retail $40. Restrained and demure but a bit of lemon and slightly vegetal. Once it warmed a bit it woke up. Not a blockbuster but stellar. Very Good. 88-90 Points.

2007 Failla Keefer Ranch Pinot Noir Russia River Valley: Retail $50. One of our absolute favorite producers, located on the Silverado trail in Napa (but most of the fruit for Ehren Jordan’s wines come from Sonoma). Like the Arthur Chard, I have held on to this for a while. The tannins are fully integrated and there is plenty of black cherry left behind. I dare to say that this is new world Pinot at its best. Maybe it’s very best. Outstanding. 92-94 Points.

2003 Domaine de Fontavin Châteauneuf-du-Pape: Retail $45. Brett. Brett. Brett. As a long time fan of red Burgundy, I understand that brett occurs in many an old-world wine and, in my opinion, can add a bit of complexity to a wine. The same is true for Rhône wines, but this was way over the top, even for me. After a while it blew off slightly but this wine is still Flawed. Too much brett can indeed be a very bad thing.

2004 Girardin Santenay 1er Cru Le Beauregard: Retail $50. While red clearly dominates in Santenay, this wine was white and therefore a bit of a rarity. When I bought this bottle, the wines of Santenay were still relatively affordable and thus Santenay, along with St. Aubin, were my go-to regions for 1er Cru white Burgundy. Well, times have changed. As I make my way through the last of my white Burgundies, I doubt I will buy much more–they have become far too expensive and risky for me. I was worried about this wine, given my recent slew of prematurely oxidized white Burgundies, and I feared the worst. The first clue is always the color: I popped and poured. Pale straw (a good thing–a more golden color would indicate potential oxidation). Phew. On the nose? A bit of fruit and some milky oak. Past the lips? This is wonderful. Still bright and a finish to die for. Whoa. This is what you hope for in a white Burg with a dozen years on it. Outstanding. 91-93 Points.

1999 Perrier-Jouët Fleur de Champagne: Retail $130. 50% Chardonnay, 45% Pinot Noir, 5% Pinot Meunier. I have said it before, there are few bottles that I would rather open than an older bottle of champagne. Slight sigh on opening, but there was a sigh (indicating there were at least a couple of bubbles left–a good thing). Slightly golden color with a faint sparkle and caramel on the nose. On the palate some fruit and a mustiness that I love. Old Champers. Whoa. Bring it. And then bring some more. Outstanding. 92-94 Points.

2008 Skewis Anderson Valley Pinot Noir: Retail $48. When I first started down the domestic Pinot Noir road, Skewis was one of my early “finds.” When I got home from the Wine Bloggers Conference in the Finger Lakes, I was craving California Pinot, so I grabbed a Skewis and some pork chops. The smoke and gaminess of the wine enveloped the chops with its black cherry goodness. On its own? The wine might even be better. Ok. It gets a Whoa. Outstanding. 91-93 Points.

1995 Château d’Yquem: Retail $250/375ml. How do you describe an Yquem? This is the fourth Yquem that a dear friend has brought by, but the first note I have written. I dare not describe the wine for I am simply not worthy. Let me just say that I could sniff an ounce of this wine for the rest of my life. It is like seeing the Tour de France in person for the first time: You can try to describe it but your efforts are futile–the only way to understand is by going there yourself. Tasting it? I imagine it must be like racing in the Tour de France. But I have no idea. I’ve never raced in the Tour.  One of the Best Wines I’ve Ever Had. 96-98 Points. 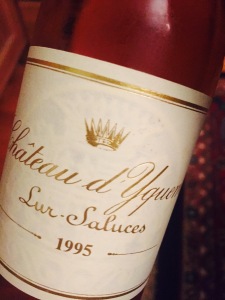 WINE of the WEEK: I usually do not discuss wines in this section that I did not buy myself. I am not sure when or how I landed upon that stance, but that is the way I have handled the “What We Have Been Drinking” since I started writing about the wine we drink during the week. Well, this week I stray from that for an obvious reason. The 1995 Château d’Yquem was brought over by a dear friend of ours and I did not plan on taking any notes on the wine (my wife gets a bit perturbed when I focus on a wine instead of on our guests). But a funny thing happened on the way to following my protocol: the wine was mesmerizing. When I posted a picture of the bottle on Facebook, many people felt that I was perhaps drinking the wine too soon, and while that may be possible, this wine ranks up there with the 1973 Dom Pérignon at the pinnacle of wines that I have tried. It took me at least ten minutes to even taste the  Yquem as the nose was so compelling. When I finally got up the courage to taste it, as I said in the note above, I really could not describe it. I apologized to those present as I tried to type some sort of description into my phone, but I knew it was fruitless–there are only so many superlatives you can use before you come off sounding like a swooning teenager, but that is exactly how I felt.

I have been an occasional cycling tour guide in Europe for the past 20 years, visiting most of the wine regions of France. Through this "job" I developed a love for wine and the stories that often accompany the pulling of a cork. I live in Houston with my lovely wife and two wonderful sons.
View all posts by the drunken cyclist →
This entry was posted in Burgundy, Champagne, Chardonnay, Châteauneuf-du-Pape, Pinot Noir, Sauternes, Wine. Bookmark the permalink.