I am a finalist for the 2018 Millésima Wine Blog Awards! Please go HERE and vote for me so that I might win a trip to Bordeaux! 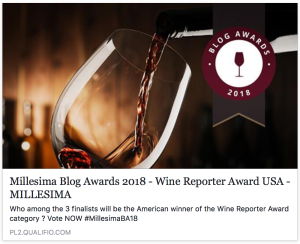 It is time for another edition of “Random Samples”–I occasionally get samples from marketing agencies and/or producers, and these can often be grouped together into some sort of over-arching theme: Drink Them and It Will Come, Summer is Here, So That Means (More) Rosé, If It Doesn’t Sparkle, It Doesn’t Matter.

Other times, I get just a bottle or two that do not have any apparent connection or link. Instead of holding on to those bottles until the “right” combination comes along, I decided to link all these “random” bottles together, making their own category (and, being the math geek that I am, “random sample” has a bit of a double entendre….

The first two wines come from Domaine Bousquet, which touts itself as “the world’s most awarded organic wine producer.” Originally from the southwest corner of France, the fourth generation winemaker Jean Bousquet visited Argentine in 1990 and by the end of the decade, he moved the family there and had vines in the ground.

NV Domaine Bousquet Sparkling Brut (White) Mendoza, Argentina: Retail $15. 75% Chardonnay, 25% Pinot Noir. This wine is made with the Charmat Method, where the second fermentation occurs under pressure in a steel tank. Loads of wet rock with exotic fruit (guava, papaya) on the nose, vibrant sparkle with that fruit really upfront. The finish is lasting and persistent, with a strong focus on minerality. Very Good. 87-89 Points.

NV Domaine Bousquet Sparkling Rosé Mendoza, Argentina: Retail $18. 50% Chardonnay, 50% Pinot Noir. Bousquet’s Rosé is also made using the Charmat Method, which might explain why I had a little trouble sabering this bottle with a hunting knife (wine made using Charmat are only at 2 atmospheres of pressure—about 30 lbs/in² while a traditional method bottle is closer to 6 ATM). Light salmon color with watermelon and white flower on the nose. On the palate, this comes off fuller bodied than the white with red berry fruit, a bit of rose petal and just a touch sweet. In all, two solid sparklers from organic grapes, both would do well on any table, but I slightly prefer the rosé. Very Good to Outstanding. 88-90 Points.

2016 M. Chapoutier Les Vignes de Bila Haut Côtes du Rousillon Villages: Retail $15. 50% Grenache, 40% Syrah, 10% Carignan. Really dark in the glass with notes of blackberry, leather, mint, and rosemary. Initially a bit austere on the palate, with chalky fruit but striking tartness. Eventually, the fruit came out to play, and play it did. This is not the immediate crowd-pleaser that is the Côtes-du-Rhône, no this requires more introspection and attention. This will not change the trajectory of your life, but it will possibly cause you to slow down and consider your current course. Very Good to Outstanding. 88-90 Points.

2016 Mac Forbes Pinot Noir Yarra Valley: Retail $30. Extremely light in the glass, in fact, this could be considered a fairly dark rosé (OK, maybe not that light, but close). Black cherry, some earthy notes, and a bit of funk–all inviting one to dive right in. On the palate this is also decidedly on the lighter side, with subtle fruit, a burst of tart acidity, and subtle tannins. You can’t get much further away than the “California” style of robust, juicy, full-throttle Pinot. 89.

2012 Pieve Santa Restituta (Gaja) Brunello di Montalcino: Retail $80. 100% Sangiovese. Brunello is another Italian region that I have a passing knowledge of, but fall far short from being an expert. I do know, however, that Gaja is a legendary producer of Piemontese wine (Barolo and Barbaresco), so even before popping this puppy, I knew it would be a serious effort. And I was correctomundo. Blackberry fruit, tar, and tobacco lead to a delicious (albeit young) palate with supple fruit, plenty of allspice, and a killer finish. Whoa. This has a way to go, but it is stellar now, so why wait? Well, to give me a little time to brush up on the region might be a good enough excuse. Outstanding. 92-94 Points.

The last three wines are a relatively new brand from the large Chilean producer, Veramonte in the Casablanca Valley.

2016 Ritual Chardonnay, Casablanca Valley, Chile: Retail $22. Slightly golden in the glass with lemon, green apple, pineapple, and a bit of funk. Good fruit and acidity on the palate, without the hint of funk. The really rich fruit is bookended with a tart, racy, acidity, with hints of oak peeking through on the finish. Very Good to Outstanding. 88-90 Points.

2015 Ritual Pinot Noir, Casablanca Valley, Chile: Retail $18. When I opened the bottle, there was some serious funk on the wine. So funky, in fact, that I threw a stopper in it and tried again the next day. Much better. Fairly dark in the glass with plenty of black cherry and just a touch of that funk. Good acidity initially and all the way through to the finish. The fruit comes in on the mid-palate, as does some earth and funk. The fruit comes off a little sweet, though, which detracts a little. Still, for the tariff, this is a decent Pinot. Good to Very Good. 86-88 Points.

2015 Ritual Sauvignon Blanc Casablanca Valley, Chile: Retail $16. Pale straw with a green tint, with plenty of pear and peach mingle with citrus notes. There is also a slight funk on the nose—not quite cat pee that is so common in New Zealand Sauvignon. No, this is more subtle, slightly meaty, and certainly savory. On the palate, the tartness is impressive—almost biting into a lemon type of strength. Great fruit and plenty of body and length persist from start to finish, I am far from a fan of the variety, but this is pretty darned good. Outstanding. 90-92 Points.

I have been an occasional cycling tour guide in Europe for the past 20 years, visiting most of the wine regions of France. Through this "job" I developed a love for wine and the stories that often accompany the pulling of a cork. I live in Houston with my lovely wife and two wonderful sons.
View all posts by the drunken cyclist →
This entry was posted in Brunello, Cabernet Franc, Cabernet Sauvignon, Carignan, Chardonnay, Grenache, Merlot, Pinot Noir, Sangiovese, Sauvignon Blanc, Sparkling Wine, Syrah, Wine. Bookmark the permalink.