Posted on February 23, 2018 by the drunken cyclist

These last few weeks, I have been chronicling my trip to Portugal last Spring. The trip started on a Monday in late May with a visit to the medieval town of Monsaraz, and the wineries of Esporão, and José de Sousa. Tuesday started with a trip to Cartuxa, and Wednesday morning we found ourselves at Dona Maria, and Thursday, we started at Herdade do Mouchão.

Leaving Mouchão, we gradually made our way south to Albernôa in the “Baixo” region of Southern Portugal, with the Herdade de Malhadinha Nova our destination. It was a two-hour trip in all, but there was little worry since we would be staying at the estate, which the proprietors call a “country home” but is closer to a five-star resort.

Yeah. I was fine with that.

When we arrived at the 450 hectare (1100 acre) estate, we were greeted by João Soares, one of the four partners that owns and operates Malhadinha Nova. We dropped off our luggage, and immediately headed out with João in one of the estate’s many four-wheel drive vehicles.

We pulled up to a table set up in the middle of the vineyard. 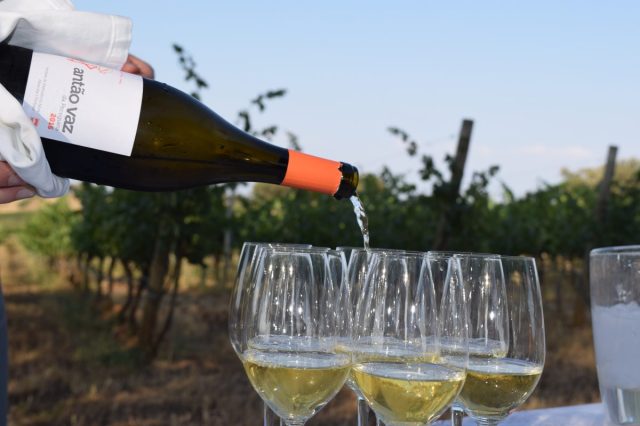 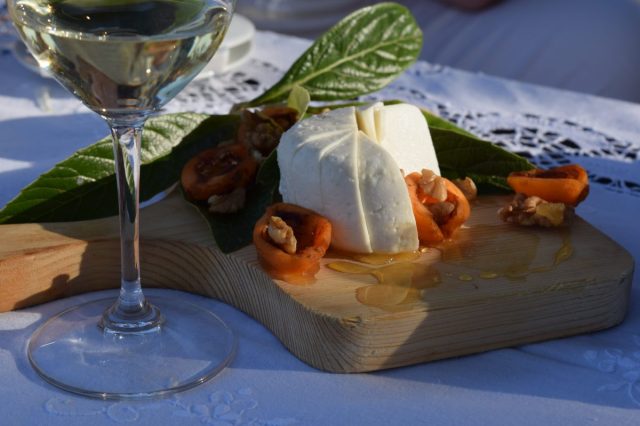 Plenty of nosh, as well. 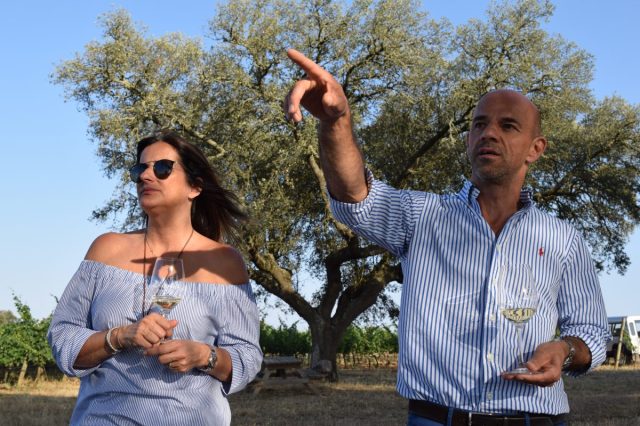 Rita and João Soares, discussing the history of the estate.

The Soares brothers (João and Paulo) started in wine distribution business, and are still currently the largest distributor in Southern Portugal, but João, even while growing the business, dreamt of becoming a farmer—a dream he had since he was a small boy and would visit his grandfather in the country. 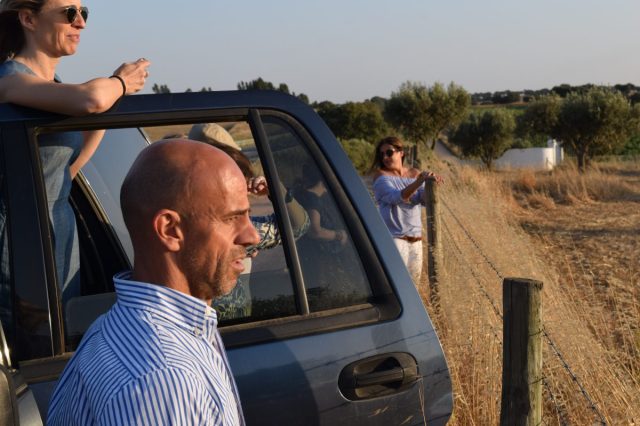 We then went on a drive through the property, on the search for black pigs which are bred on the property…

…and there we go, the Porco de Raça Alentejana.

When the two had acquired enough capital, they decided to purchase the original 200 hectares (500 acres) of what would become Herdade de Malhadinha Nova. Although they new little about the production of wine, they new what they liked, and they convinced winemaker Luis Duarte, who had worked along side Esporão legend David Baverstock for 18 years, to join them in 1999.

This despite the fact that the previous house on the estate was in ruins, there was no water, no electricity, not much of anything.

There might not have been electricity, but there were stunning sunsets.

But João and his brother saw it as a perfect opportunity—had they purchased an existing winery, they would have been making bad wine (since that was what most of Alentejo produced at the time) and they were not interested in working against that reputation. They would rather start from scratch and build a brand—they felt “this is the right time for Portugal. For wine. For tourism. For wine-tourism. For everything. And we need to take advantage.”

There are plenty of storks on the property as well and having studied in Alsace, I am a big fan of the stork.

Later, he added that he felt that previous generations in Portugal struggled, with the country largely seen as backward and behind. Now, though “this is the first generation that is proud to be Portuguese.”

Starting with virtually nothing on the property, they built a modern winery but wanted to maintain some local traditions. Thus, they built a modern, gravity flow winery, but also included lagares, the traditional stone troughs where grapes are crushed by foot. At Herdade de Malhadinha Nova, though, the lagares are made of stainless steel and are temperature controlled to enable lengthy fermentations. Although some of the grapes are still crushed by foot, they also installed a robot foot treader.

Eventually, lakes were built to collect water for irrigation, and 35 hectares (80 acres) are now under vine, with the singular goal of making high quality wines. The first harvest was in 2003 and by 2005 Herdade de Malhadinha Nova was receiving international recognition for their wines. The Soares, continually looking to improve their wines, switched over to farming 100% sustainably and organically at the beginning of last year, and will be certified as such in another two years.

Today, production is at 350k bottles (65% red, 27% white, 8% rosé), of which 70% is sold domestically. The goal is to gradually increase production, which will fuel the demand for exports. João attributes the success and relatively rapid growth: “We have been successful because when we started we knew exactly what we wanted to do. No limitations, no barriers.”

It also helped that once the wine was ready to be sold, they happened to know a pretty good distributor in the area. 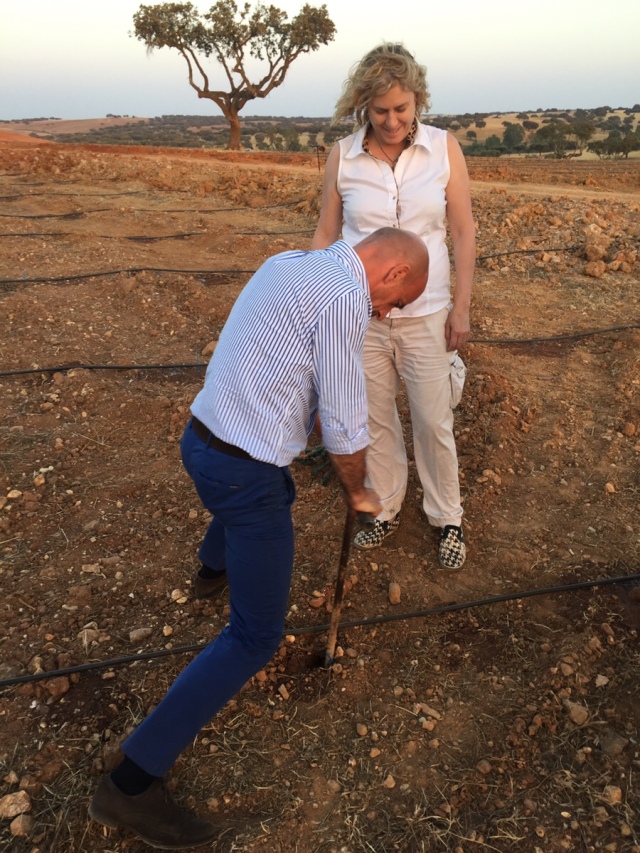 João took us to a vineyard that they would be planting in the morning and showed us how to plant a vine.

A few vines ready to plant.

And then put us to work.

No doubt these will be the most productive vines on the estate in a couple of years. 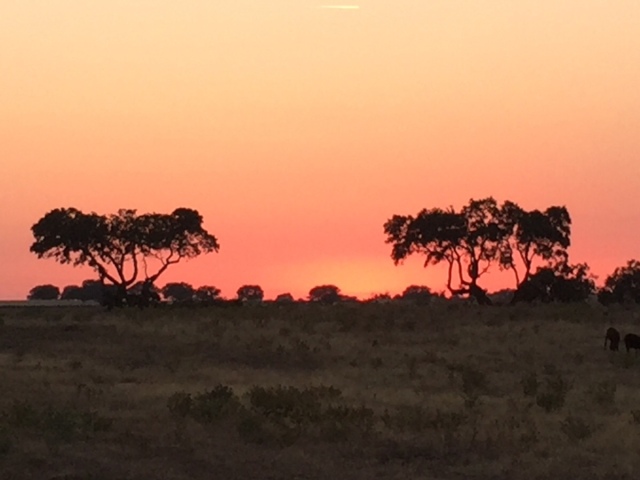 Did I mention the sunsets?

That night, we had dinner at the award-winning restaurant on the property. Whoa.

Life can be rough.

Oh, and we had plenty of wine, naturally.

2015 Herdade de Malhadinha Nova Malhadinha Rosé: Retail 22€. 50% Touriga Nacional and Baga. “Baga is different” comes from the region just to the South of Douro and is high in both acid and tannin. 7 months in 500 liter used French oak. Free run. 250 cases. Strawberry and peach. Whoa. This is lovely. One of the best rosés I’ve had and I’ve had a ton of them 22€? Totally worth it. Whoa. Outstanding. 92-94 Points. 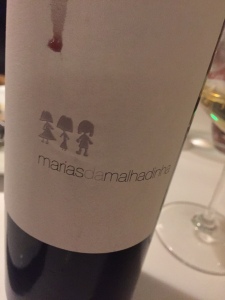 Thanks to João and Rita Soares at Herdade de Malhadinha Nova for a magnificent stay.

Did I mention they have storks?

I have been an occasional cycling tour guide in Europe for the past 20 years, visiting most of the wine regions of France. Through this "job" I developed a love for wine and the stories that often accompany the pulling of a cork. I live in Houston with my lovely wife and two wonderful sons.
View all posts by the drunken cyclist →
This entry was posted in Alicante Bouschet, Antão Vaz, Aragonez, Arinto, Baga, Cabernet Sauvignon, Syrah, Tinta Miúda, Touriga Nacional, Wine. Bookmark the permalink.