A Short Visit to Louis Jadot in Beaune

Anyone who has perused French wines in virtually any wine shop or supermarket has seen the ubiquitous label adorned with the head of Bacchus, the Roman god of wine, seemingly giving his stamp of approval to every bottle of Louis Jadot wine.

One of the many Jadot wines in my cellar, this 2002 Chambolle-Musigny Les Baudes is ready to drink.

I really have no idea when I tried my first Louis Jadot wine, but it must have been really early in my Burgundian experience. Not only is Louis Jadot synonymous with perhaps France’s greatest wine region (pipe down Bordeaux, you have grown a bit too big for your britches), but for most tyros, it is likely among the first Burgundies one tastes, regardless of color.

Thus, when I was offered a chance to visit last summer, I leapt at the chance.

As I was staying in Dijon, La Maison Louis Jadot, which is located in Beaune, was but a short 20 minute drive south to visit the winery. I was met by one of the winemakers, Christine Botton, who has been at Jadot for over thirty years. After a brief decision that my French was marginally better than her English, she took me on a tour of the facility while giving me some background on the brand.

While the company was officially founded by Louis Henry Denis Jadot in 1859, but the history of winemaking in the family goes back to 1826 when Jadot’s family bought the Clos des Ursules, a Premier Cru vineyard in Beaune.

The largely négociant house (Jadot buys much of its wine from other producers, then bottles it under its own label) grew rapidly under Louis Jadot’s guidance and continued over the next century. In 1985 Madame Jadot decided to sell the brand to the family of Rudy Kopf, the longtime U.S. importer for Jadot (Kopf was the founder of Kobrand).

Now, the winery owns 240 hectares (600 acres) of vineyards from Chablis to Beaujolais and still buys a considerable amount of wine as a négociant. The winery exports up to 80% of its production.

The barrel room for village wines is enormous. With several hundred barrels.

We then moved to the tasting room, where we went through a couple dozen wines. Here are the wines that stood out for me.

The nifty preservation systems that were made exclusively for Jadot. One for both the whites and reds, each holding up to twelve bottles.

In a somewhat un-Burgundian manner, we started with the whites (it is quite common in the region to taste the reds before the Chardonnays). The white wines are all vilified at the winery, malolactic fermentation is usually prevented, and the whites are all aged for 12-14 months in oak (French, of course), of which 30% is new. (All 100% Chardonnay.)

2014 Louis Jadot Saint-Veran: Retail $20. From the Mâconnais region, south of the Côte de Beaune and north of Beaujolais. Fruity. Clean, delightful. A solid Chard for the price. Very Good. 87-89 Points.

2015 Louis Jadot Bourgogne Blanc: Retail $15. Jadot produces a ton of this wine, and it is likely in your grocery store. A bit thinner than the Saint-Veran, but good fruit and balance. One could do a lot worse at this price point. Good to Very Good. 86-88 Points.

2015 Louis Jadot Pouilly Fuissé: Retail $25. Another wine with big production, this is also from the Mâconnais and is perhaps the region’s most recognizable appellation. A bit more heft with good fruit and body. Very Good to Outstanding. 88-90 Points.

2013 Louis Jadot Fixin Blanc: Retail $35. I have rarely seen a white from this commune located just north of Gevrey-Chambertain.  A bit closed and thin on the mid-palate, but a killer finish. Very Good to Outstanding. 88-90 Points.

2014 Louis Jadot St. Aubin: Retail $45. What used to be a little bit of a secret and therefore a great place to find a bargain in Burgundy, St. Aubin has gradually grown in stature over the last couple of decades. Great aromas and wonderful body. Very Good to Outstanding. 89-91 Points.

2014 Louis Jadot Meursault: Retail $70. One of the three famed contiguous towns that define white Burgundy for many. Yet, this is not quite as expressive as the St. Aubin. Finished with more minerality. Very Good to Outstanding. 88-90 Points.

2013 Louis Jadot Beaune Bressandes 1er Cru: Retail $55. Beaune is one of the largest appellations in the Côte d’Or, and probably largely overlooked when it comes to top level Burgundy, so there are great values to be found, such as this wine. A beautiful nose of citrus, vanilla, and wet rock, with great weight. A real beauty. Outstanding. 90-92 Points.

2015 Louis Jadot Corton-Charlemagne Grand Cru: Retail $190. The story is that Charlemagne loved Corton, but his wife hated how the red wine stained his long white beard so he ordered some of the Pinot ripped out and replanted with Chardonnay. A big nose of stone fruit, vanilla, and just the right amount of oak. The palate is equally impressive with plenty of weight and lengthy finish. Could use some time, though. Outstanding. 93-95 Points. 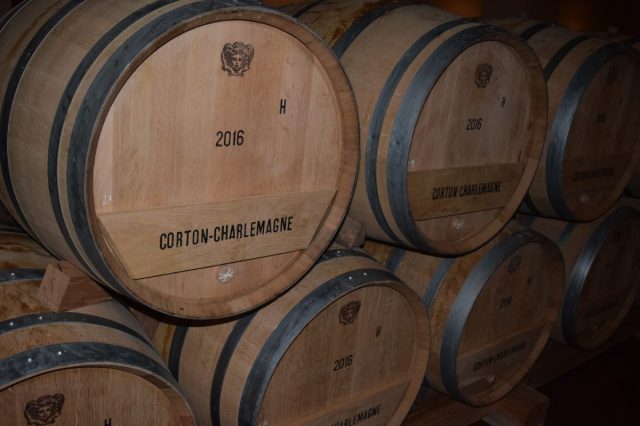 Some of the best white wines Jadot makes.

As for the production of red wines, Jadot has used the same approach for decades: a long maceration to extract tannins, which therefore requires a bit of bottle aging (5-10 years at a minimum) for the wines to show their best. Grand Cru and Premier Cru reds are vinified at the winery, while all others are made at other facilities. (100% Pinot except when noted.)

The fermentation room is impressive.

2013 Louis Jadot Ladoix: Retail $40. Juxtaposed next to Corton, in the northern section of the Côte de Beaune, this Ladoix has a great perfumed nose of yellow roses and small red berries with plenty of intrigue on the palate. Not the greatest year so a bit lacking in fruit but solid. Very Good. 87-89 Points.

2012 Louis Jadot Chorey-lès-Beaune: Retail $35. Perhaps even less appreciated than the vineyards in Beaune itself, the wines of Chorey are another target for the bargain hunter. Riper despite the smaller vintage. Much more fruit and tons of tannin. Hold. Hold. Hold. Outstanding. 90-92 Points.

2011 Louis Jadot Monthélie Champs Fulliot 1er Cru: Retail $35. Another bargain-seeker’s wine, just next to the more prestigious Volnay Chênes, but at about half the price. Fruity and well balanced. Just short of a whoa. Outstanding. 91-93 Points.

2009 Louis Jadot Nuits-St-Georges Les Budots 1er Cru: Retail $75. From one of the storied appellations in Burgundy. Darker, more intense nose than any of the previous. Spicy and brooding. More intense and aggressive. Whoa. Outstanding. 92-94 Points.

2007 Louis Jadot Gevrey-Chambertain Clos-St.-Jacques 1er Cru: Retail $165. This is why one loves red Burgundy. Smoked dark berry fruit with plenty of heft. Still young. Big. With a never ending finish. Whoa. Still a ton of time ahead of it. Outstanding. 93-95 Points.

I have been an occasional cycling tour guide in Europe for the past 20 years, visiting most of the wine regions of France. Through this "job" I developed a love for wine and the stories that often accompany the pulling of a cork. I live in Houston with my lovely wife and two wonderful sons.
View all posts by the drunken cyclist →
This entry was posted in Burgundy, Chardonnay, Pinot Noir, Wine. Bookmark the permalink.

4 Responses to A Short Visit to Louis Jadot in Beaune