I am in the midst of just over three weeks riding my bike around France, first preparing for, and then leading, bike tours of two regions in the country: Eastern Brittany (along the northern coast), and Northern Burgundy. The first week I was on my own, reacquainting with the two regions that I last visited a solid decade ago. From the first meal on the road, I decided to limit my wine intake to only those that were served en carafe. Why? Well, simply, I saw this trip as an opportunity to lose a bit of weight, save a bit of money, and not appear as a guy who could potentially pass out face-first in his salad.

There was also another decided reason: for the most part, wines en carafe in France are pretty darned good. Most restauranteurs in the country take great pride in their work and choosing “house” wines is no exception. Most of the time, there is little information about the wines available when ordered, and even when the question is posed of the server, he or she knows very little of the wine. And that is, at least in part, the point. Us wine types usually get too caught up in vintages, varieties, and vignerons, forgetting that wine, above all, is supposed to be consumed with a meal and enjoyed, not over thought and over analyzed.

Thus, here are a few of the wines that I tasted over the fortnight, including further information about the wine when available and when I remembered to ask:

The indoor floodlight that was directed at my table was terrible for photos.

Blanc, 10€50 (50cl): I was in Paimpol, a small fishing village along the Brittany Coast in Northern France for one last dinner before leading a bike trip originating from a train “station” about 20k outside of Paimpol the following afternoon.

After cruising the town a bit, looking for both oysters and some sort of seafood on an inexpensive ménu, I settled on a place right on the harbor, and asked to be seated outside. Since single diners are often seen as the red-headed step-cousin in the restaurant world, I was told the only table was inside, next to the bustling kitchen. Perfect.

My server, though, took a liking to me (note: I often confuse friendliness and pity) and she was cute in that ever-so-French way. 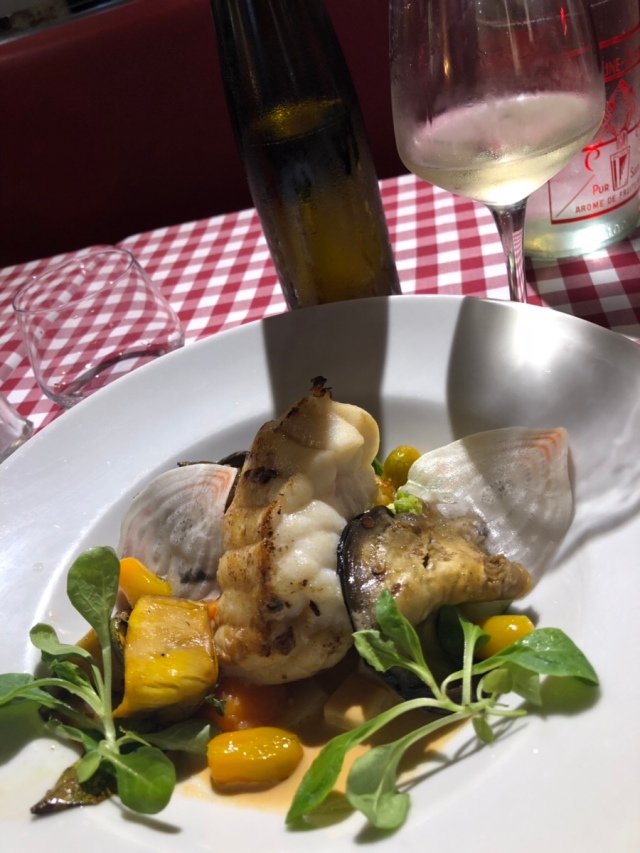 This is an embarrassingly poor photo of the rather tasty cod.

Once again presented with the tri-color choice, I opted once more for the Chardonnay, given my luck the night prior and my dinner choice: six oysters from the bay before me and fresh cod. The wine had a slightly golden color with a pronounced white flower and pear and peach, trailed by wet crushed rock. So far so good. The palate was inviting yet unexciting, with decent fruit up front but a bit thin through the mid-palate. Not bad or even disappointing, but the wine last night had set a very high bar. Good to Very Good. 86-88 Points.

Rouge, 4€80 (25cl): It was the day of my first trip–it would start at 3:30 on the platform of perhaps the world’s saddest train “station.” Despite threatening morning skies, by noon the clouds had broken up a bit to welcome in some warming sun. The afternoon also brought along a healthy wind (about 20 mph), which should make this afternoon’s ride interesting. After a rather uneventful morning of strolling the town looking in vain for a replacement tire for my bike (you would think that the country that hosts the most famous bike race in the world would have at least a few quality bike shops scattered about, but the French remain more firmly interested in smoking their brains out than getting their increasingly fat keisters out to get some exercise), a settled on a restaurant just a few feet from my hotel. 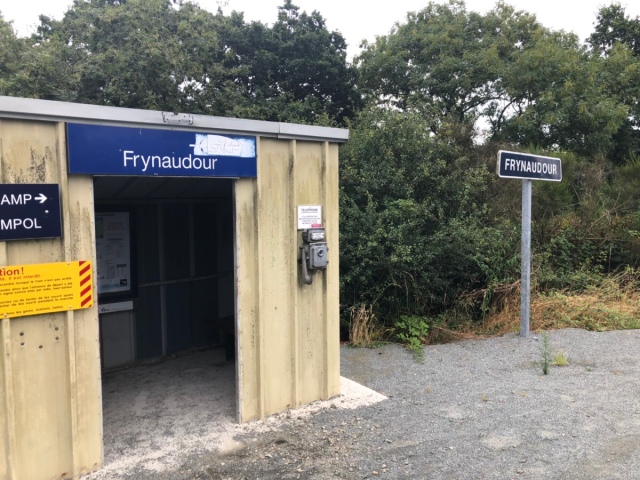 The French do not refer to this as a “station” (une gare) but rather a “stop” (une halte).

Once again, I opted for a salad in hopes that it would offset at least partially the added calories of wine at lunch (which, I have to give it to the French, is an incredible idea). I decided I needed to try at least another red on my voyage en carafe and thus opted for the salade du chef (chefs salad). It was a healthy plate with lettuce, tomatoes, ham, cheese, egg, and olives (both green and black, but only the black were pitted—explain that please?). As for the wine, the color was all I knew, but it was served with a healthy dose of second hand smoke when the French equivalent of red-necks sat down directly up wind, one replete with a “Son’s of Anarchy” tattoo and sleeveless “Florida Surf School” t-shirt. Lovely. His wife looked like she had been smoking sans cesse her entire life and her nearly black teeth confirmed it.

Their table ordered mussels, though, which I had resisted with nearly every fiber of my being as they were in season and caught just about a kilometer away from where I sat. The wife (?), perhaps on a similar weight-loss plan (?) ordered the same salad as I, along with a glass of Sancerre, causing my jaw to drop to the table, making contact with my plate, nearly causing me to toss said salad. The mussels looked delicious and they proceeded to eat in the exact same way I do: using one of the shells as pincers to extract the little beasts from their homes. This caused me to ponder many of my assumptions I had made based solely on their appearance, and wondered if we might actually be less dissimilar than I originally posited. Thus, I quickly altered course and wondered how I would look with a “Sons of Anarchy” tattoo.

My salad was good, just what I expected and hoped but the Red exceeded my admittedly low expectations (generally speaking, I find inexpensive whites to be “better” than their red brethren). Nice red berry fruit and a bit of spice, this is far from a complex wine, but it is light on its feet, has nice flavors, and does not pretend to be anything it’s not. For under 5€, I imagine one could do far worse. Good to Very Good. 85-87 Points.