Well, it’s that day again: Halloween. I don’t think there is a day on the calendar that brings up more conflicting emotions than the last day of October. Almost all the other “significant” events during the year have either been co-opted by this country’s love of commercialism or are just another reason to open a really good bottle of wine (or seven).

No, Halloween involves more active participation than the others, as it either requires choosing a costume for oneself or having to put up with other adults wearing costumes and trying not to think of them as idiots.

I am firmly in the latter camp.

I realize that I might take a little heat for this admission, but for years I have thought that adults dressing up for Halloween was, well, stupid.

I know what you are thinking: “Yeah, well, you know, that’s just, like, your opinion, man.”

And you would be right; for years, I chalked it up to the trauma of having to be a “homemade” clown every year as a kid, but that might be a bit too simplistic. I think it is the fact that my creativity, what little there is, has absolutely nothing to do with coming up with an original or imaginative “disguise.” 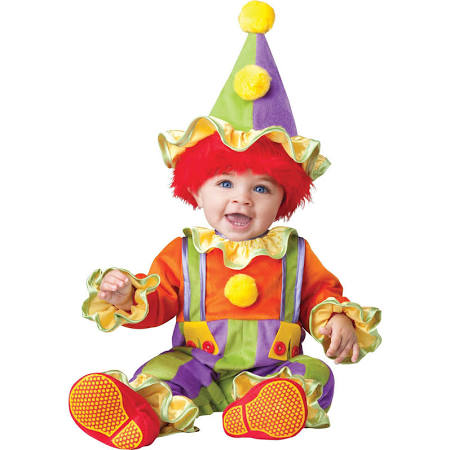 Not my actual costume, but close.

In short, I don’t like Halloween because it is essentially a talent show every year, one that I know I will never, ever, win. Yes, I see Halloween as a concerted effort by the more artistically gifted to pay back all those that have bullied, ridiculed, and derided them the rest of the year. It’s that one day when a 57 year-old dressed up as Waldo can make me feel inadequate simply by holding a glance a moment or two longer at my un-costumed body.

OK, I really don’t believe that. I am just woefully pathetic at conjuring up clever costumes.

I actually do have a couple of costumes, and I blame them on our boys. After Nathan was born, my wife (who is even more ambivalent than am I about Halloween) and I decided we should try to “get into the spirit” for him. So we bought vampire costumes.

I spent the better part of two hours applying make-up to look like a slightly pastier (and more effeminate) version of myself who had odd streaks of black hair dye running down his temples.

I’ve worn that costume once.

Then, when Sebastian was born, I tried a “gangster” costume and my wife was a “flapper girl.” While she looked fantastic (as she also did as a vampire, by the way), given my larger than average height, I had to purchase my zoot suit from the Big & Tall department. The resulting look was closer to “a successful-weight-loss-patient-with-really-poor-fashion-sense” than Al Capone or Michael Corleone.

My only other costume was makeshift: I had bought an authentic French beret several years ago and thought I would go as a “French person.” Well, since both of the boys went to a French International school, when I showed up at the school in my “costume” most of the Frenchies (who are really into Halloween, but that needs its own post) either looked at me as if to say “This is not ‘Nam, this is Halloween. There are rules, where is your costume?” Or worse, they thought I was mocking them and got pissed off, letting me know that the aggression would not stand (I guess, in a way, the latter group was right, but that is not the point).

Thus, for the past half a dozen years or so, I have avoided “disguisement” on Halloween altogether.

This year, the kind people at Two Hands Wines sent me a little care package to commemorate the twenty-year anniversary of The Big Lebowski, a brilliantly funny film by the Coen brothers (if you have not seen it, you should, but you need to watch it at least twice before you start to get it–it’s much more about the characters than it is about the plot). In it was a bottle of Two Hands Gnarly Dude Shiraz and a Halloween costume: the Dude from the film (the main protagonist in the film refers to himself as “the Dude”).

So, in an attempt to revive some sort of Halloween “spirit” (the people in Houston really take the event seriously), here I am as “The Dude” (and there are a few paraphrased quotes from the film in this post–can you find them?).

Here are two wines that I would be pouring tonight if I were partaking–sadly (?) I am in the Czech Republic, heading for Budapest…. 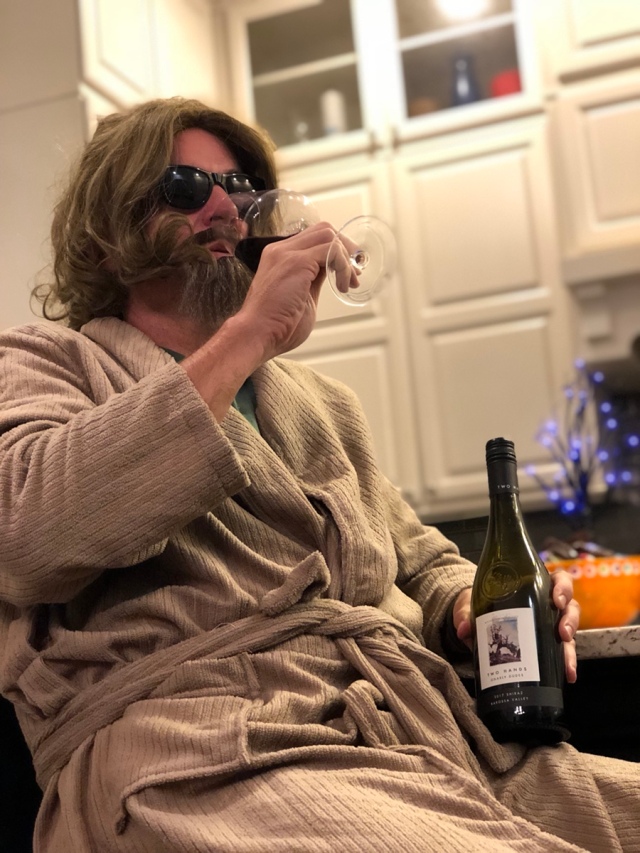 2017 Two Hands Gnarly Dudes Shiraz, Barossa Valley, Australia: Retail $30. 100% Shiraz. Anyone who has seen the movie The Big Lebowski, knows that the go-to drink for the Dude was the White Russian. But what if that cocktail were no longer available for the Dude? What if he had no cream? He would need to pivot, to opt for a different “adult beverage” to scratch whatever itch the White Russian provided. Enter the Gnarly Dude. It is quite possible that the Dude saw himself as “Gnarly” but the wine refers to a vineyard of old vines, twisted and, yes gnarled, that produce incredibly intense fruit. That intense fruit produces wonderful wines that are dark in the glass, with dark berry fruit (blackberry and cassis), more than a modicum of spice, and intense black pepper. The palate is quite fruit, but black, austere berries dominate here. The fruit is followed quickly by an intense burst of acidity, then the blackberry re-introduces itself on the mid-palate, really tying the room, er, wine together. I have little doubt that when The Dude (the “small Lebowski”) opts for a fermented beverage, this would be at the top of the list. Outstanding. 90-92 Points. 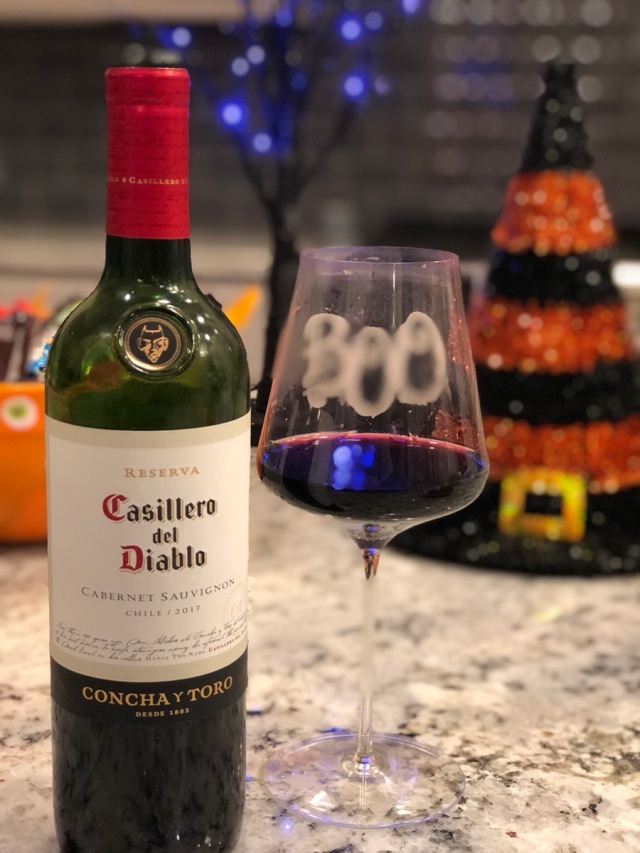 2017 Concha y Toro Casillero del Diablo Cabernet Sauvignon Reserva: Retail $15. 100% Cabernet Sauvignon. Casillero del Diablo has become a bit of a Halloween tradition since I have started this blog, as the legend of the devil protecting the cellar fits in well with the season. I loved Halloween as a kid, but it lost most of its appeal in eighth grade, when, at 6 feet tall, I was criticized repeatedly for being too “old.” For me, Halloween did not hold much of an appeal for the next couple of decades. But since I have been a father, Halloween has evolved into a wine tasting block party, as I would walk around with my boys, wine glass in hand, accepting refills as we circled the neighborhood. Now, as the older son no longer is out in search of tricks nor treats, and the younger is aghast if I am even within forty feet of him, I sit at home and dole out wine to the parents of young children who are suffering the rather insane march as I once did. This wine is one of my favorites to pour: dark red fruit and black pepper with a bit of Christmas spice on the nose, with pretty big fruit on the palate with a bit of that spice, and more intrigue than the tariff would suggest. A solid bargain. Very Good. 87-89 Points.

I have been an occasional cycling tour guide in Europe for the past 20 years, visiting most of the wine regions of France. Through this "job" I developed a love for wine and the stories that often accompany the pulling of a cork. I live in Houston with my lovely wife and two wonderful sons.
View all posts by the drunken cyclist →
This entry was posted in Cabernet Sauvignon, Shiraz, Wine. Bookmark the permalink.

7 Responses to My Gnarly Halloween Confessional