Posted on November 5, 2018 by the drunken cyclist

Over the course of a week, I taste a bunch of wine, usually with friends, and almost always with my wife.  This past week, my wife and I have been in first, Prague in the Czech Republic, and then Budapest, Hungary. Here are the wines that we purchased at dinner (and one lunch) while on the trip (prices are what we paid in the restaurant):

2015 Castello di Verrazzano Chianti Classico: Kč (Czech Koruna) 1100 (about $50). 100% Sangiovese. It was late and we were exhausted. We had both arrived in the Czech Republic’s capital that morning after the long overnight flight from Houston. The two-hour afternoon nap helped, but we were still close to passing out from fatigue. I found a restaurant not far from our hotel–a local beer garden that served local Czech food, which seemed to be fairly popular on the interweb. The problem? There was a huge celebration that day in Prague despite the cold, rainy weather: it was the 100th anniversary of the creation of Czechoslovakia, the precursor to the modern Czech Republic. So there were a ton of people in town and coincidentally a two-hour wait for a table. Ugh. We chose to leave and battle the elements since there was no way we were going to stay awake that long. We found a charming little spot near the hotel and were able to scoop up their last available table. The restaurant served traditional Czech food and had traditional Italian wines. Disconnect? Well, the Czech Republic has a reputation as a beer country (although there is a burgeoning wine industry), so the restaurant went full Italian on their menu and we opted for this classic Classico. Good fruit, plenty of depth, and enough tannin to suggest that this beauty has a bit of life ahead of it. I was tired, the wine was far from it, and served as a pick me up of sorts. At least until I got back to the hotel. Very Good to Outstanding. 89-91 Points. 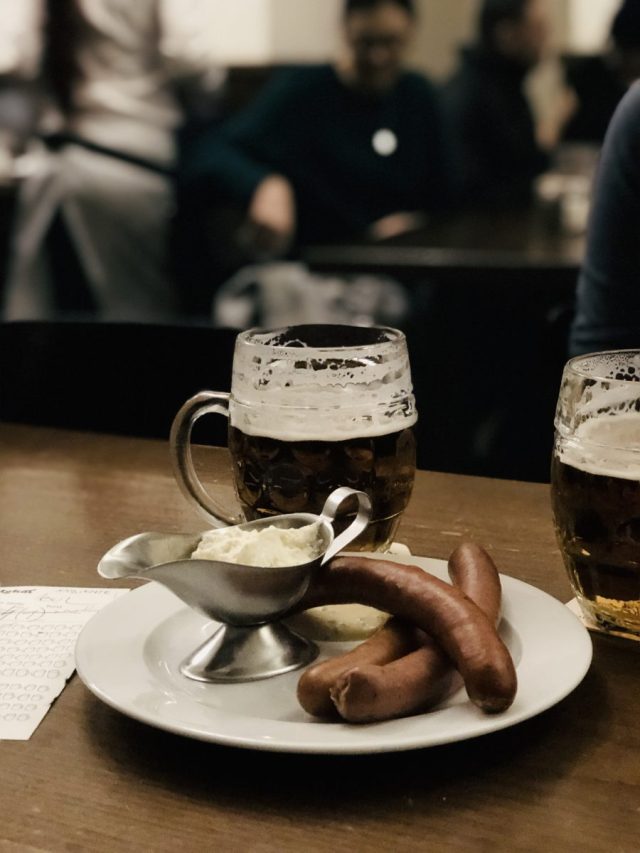 Pilsner Urquel, Czech Lager: Kč 65 (50cl) (about 3 bucks). Beer is ubiquitous and cheap in Prague, often cheaper than a Coke or even bottled water, and no beer is more widely served than Pilsner Urquell, the original pilsner (a type of lager–a cool, bottom fermented beer). As such it has been often imitated around the world, but the city of Plzen (Pilsner), about 90 kilometers outside of Prague is the birthplace (1842) of the style. On the second night in the capital, we got a table in the beer hall that we had tried (unsuccessfully) the night before. We ordered some traditional Czech food (although they were out of goulash) and a couple of Pilsner Urquells. The ordering of beer couldn’t be much easier, since there are only two choices (dark or light) and one size: 50cl. While not a big beer guy, Pilsner Urquell is refreshingly clean, a touch sour, and decidedly hoppy (bitter) on the finish. Very Good. 87-89 Points. 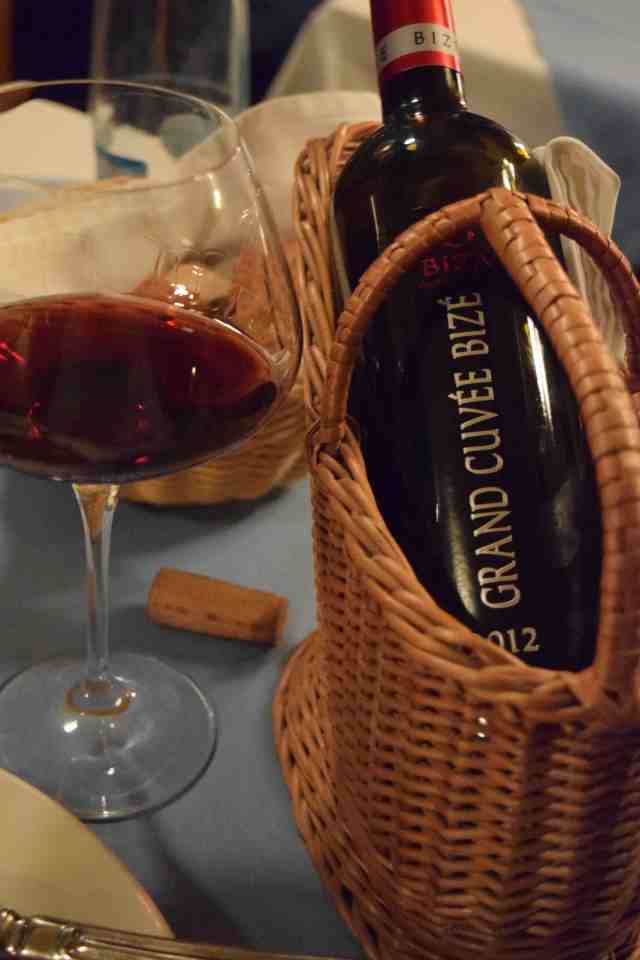 Perhaps my first Czech wine and it was fantastic!

2012 Grand Cuvée Bizé Vyber V Hroznu: Kć 1150 (about $52). The concierge at our hotel, the King’s Court in Prague, when asked where to have duck, suggested the U Modré Kachničky (the Little Blue Duck) and made us a reservation. Almost immediately upon entering the restaurant, the waiter asked me if I were Czech, since my last name means “rabbit.” I responded definitively with “I have no idea, maybe?” While normally at ease around a wine list, as far as I know this is my first real foray into Czech wine. According to the waiter, it is called a cuvée since it was originally a blend of Pinot and Merlot, but is now 100% Pinot. Regardless, it comes in a Bordelais bottle under a Diam closure. Fairly dark yet still translucent in the bottle with a fair amount of funk on the nose (Brett). The palate is big and juicy, albeit a bit stewed (30 days of maceration) with plum and a bit of spice. The finish is tart and austere with an ever-so-slight hint of tannin. For my first dive into Czech wine, this is a great place to start. Before the food, this was a solid effort (88-90 Points), but it really took off once the food arrived. Outstanding. 90-92 Points.

One of my favorite Champagne houses.

N.V. Philipponnat Royale Reserve Brut: Retail Kć 2200. 65% Pinot Noir, 30% Chardonnay, 5% Pinot Meunier. We were in Prague and despite the fact that there was no sea within 1000 kilometers we opted for oysters. And of course champagne. The list was impressive (around 200 bottles) and expensive (cheapest was $100). I opted for this as it was on the lower end of price but higher end of respect for a grande marque. As we waited for our oysters, my wife could not help but eavesdrop on the couple over her right shoulder. As the drama unfolded between a young woman and a man at least twice her age (maybe more), I focused on the wine (and a little bit on the drama). A bit dark in the glass (it was also quite dark in the restaurant) with apricot jam, yeasty goodness, caramel, and a touch of citrus. The palate is delightful with the caramel coming first, followed by a healthy dose of citric acidity. The bubbles are fine and persistent and the finish lengthy and deep. Whoa. I had always been impressed with the wines from this house, and this wine served as justification. As for the couple behind us? We hypothesized that it was a professor and his student in a less than admirable situation. As for the wine? More than admirable effort. Outstanding. 92-94 Points.

I have been an occasional cycling tour guide in Europe for the past 20 years, visiting most of the wine regions of France. Through this "job" I developed a love for wine and the stories that often accompany the pulling of a cork. I live in Houston with my lovely wife and two wonderful sons.
View all posts by the drunken cyclist →
This entry was posted in Beer, Champagne, Chardonnay, Pinot Meunier, Pinot Noir, Sangiovese, Sparkling Wine, Wine. Bookmark the permalink.