A month or so before everything got “real” regarding the coronavirus, I received an email from a Public Relations person inquiring if I would like to have lunch with a European industry-type who was in Houston for just a few hours.

Before the pandemic hit, I would guess that I would get somewhere close to a dozen such emails a week, requesting my presence for either lunch or dinner. Compare that to Philadelphia where I would get 3-4 such requests a year (there are perhaps several reasons for this, not the least of which is the fact that the Commonwealth of Pennsylvania is a liquor control state, meaning that producers had little incentive to convince writers about the inherent quality of their product–they only had to influence the Pennsylvania Liquor Control Board, the largest purchaser of wine in the country).

It does not take a math major (I had a math minor) to figure out that such a schedule is essentially impossible. (I realize that I could double-up and do a couple a day, but that would mean I would rarely eat with my family and I would also weigh 637 pounds.)

This particular email, though, was slightly different: it was from a whisky producer in Scotland. Yeah. Scotch.

I know far too many people that would have started doing cartwheels upon receiving that email, but I was stressed out more than a bit.

Sure, for several years now, I have had a running New Year’s Resolution–I wanted to learn more about spirits, but I was scared to death–I think I actually knew less than nothing about all things distilled. Thus, up until about eight weeks ago, I had successfully put off that resolution for at least a half a dozen years.

Not any longer. I responded in the affirmative and on the allotted day (just before all kinds of social distancing measures were implemented), I met with Iain Forteath, the Global Brand Ambassador for Tomintoul Whisky.

Iain Forteath and a few bottles of Tomintoul.

Right from the jump, I let Iain know that I was at best a neophyte in the Scotch game and he could not have been more welcoming, understanding, and tolerant of my barrage of questions.

Iain first explained a bit about Scottish whisky as opposed to American whiskey. The biggest difference (after the obvious geographic one) is the products and the process by which the whiskies are made. American whiskey or bourbon, which comes mostly from Kentucky, must contain at least 51% corn and aged in new, charred oak barrels. usually for a few years.

On the other hand, Scotch (the term Americans have applied to Scottish whisky) is distilled from barley, a cereal grain from the grass family (and Scotland’s largest crop) and is typically aged for much longer periods of time in used American bourbon casks.

Since bourbon has to be aged in new casks the once-emptied barrels are then shipped off to Scotland where they are gladly purchased by the Scots. Iain intimated that the fact that the barrels had already had a spirit in them was an advantage–the bourbon extracts all the harsh flavors out of the barrel, leaving a more pristine taste to impart on the Scottish whisky.

(For the sake of this article and my sanity, I will not touch on the other types of whiskey, notably Canadian whisky and Tennesse and Irish whiskeys.)

Tomintoul, as Iain explained, is on the softer side of whisky, which is why they call it the “Gentle dram” (a “dram” is the traditional word used when asking for some Scotch, as one might ask for a “shot of tequila”). Iain also suggested that this makes it perhaps the perfect whisky to start with for the uninitiated.

Tomintoul is a Speyside whisky (one of the five regions of Scottish whisky), and more specifically in the Glenlivet region of Speyside (Glenlivet, another Scotch, is the largest producer of whisky in Glenlivet and is not related to Tomintoul at all).

Oh, and one more term: single malt. These are all single malt Scottish whiskies, which means that what is in the bottle all was produced by Tomintoul. A blended Scottish whisky is one that blends whisky from several different producers in the same region.

My brain is starting to hurt. Time to try some Scotch.

We tasted quite a few that day (nine in total) and here are the first four. All were made in the same way, using similar barrels, with the only difference being the length of ageing in cask (the number on the bottle indicates the youngest whisky that was used). 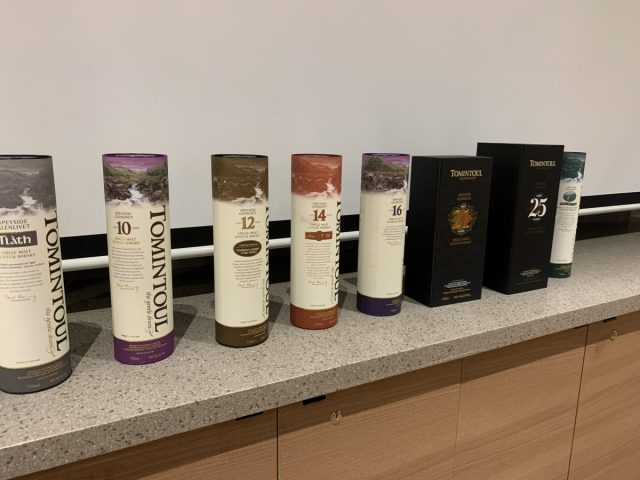 Tomintoul Tlàth, Single Malt Scotch Whisky, Speyside Glenlivet: Retail $40. 40% ABV. Tlàth (pronounced “Tlah”) is a Gaelic word that means smooth or mellow, which falls in line with Tomintoul’s claim to be the “gentle dram.” A blend of several casks with most of the stock at 6-8 years old.  According to Iain, this is a “Poker night single malt.” It is not terribly expensive, nor does it require much introspection when you are drawing to an inside straight. Sweet on the nose. Toffee and vanilla. The palate is sweet as well with a bit of brown sugar. Lengthy finish. Very nice. Very Good. 87-89 Points.

Tomintoul 10-Year-Old Single Malt Whisky, Speyside Glenlivet: Retail $40. 40% ABV. More honeyed and floral on the nose than the Tlàth with some orange peel notes. Lighter, more subtle than the above, but also nuttier on the palate and perhaps smoother, which I would consider “nicer” but I might be splitting hairs here. With time in the glass, it becomes a tad sweeter, particularly on the nose. Very nice. Very Good to Excellent. 88-90 Points. 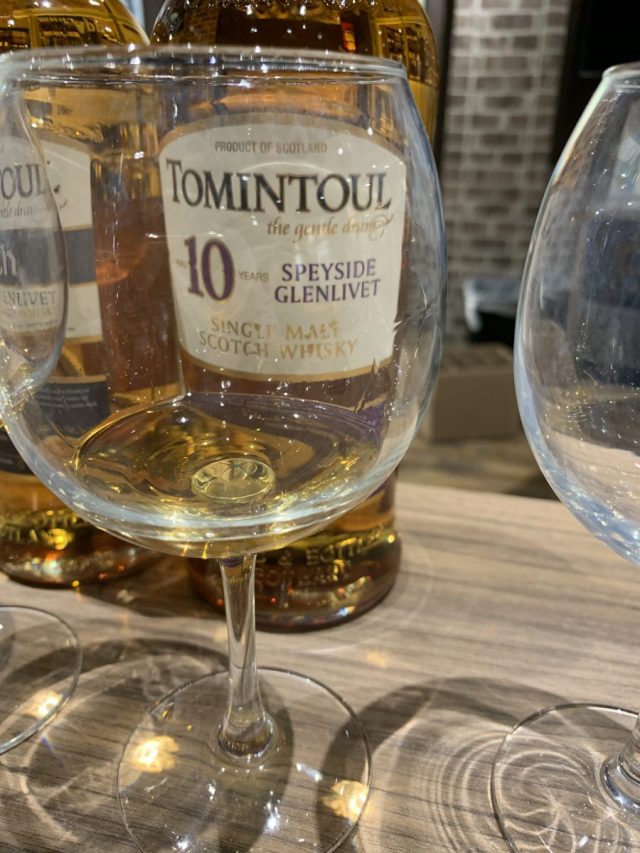 Tomintoul 16-Year-Old Single Malt Whisky, Speyside Glenlivet: Retail $56. 40% ABV. The same process as the previous two: aged in previously used American Bourbon casks (Bourbon is typically aged 3-4 years in the new casks, which pulls out the harshness of the new barrel). This is both sweeter and less harsh than the 10-year-old with vanilla and creme brûlée. The palate is a bit more austere initially but with a greater intensely fruity (apple and peach) on the finish. At just a few bucks more than the Tlàth and the 10, there is a bit more bang for the buck here. Excellent. 90-92 Points.

Tomintoul 21-Year-Old Single Malt Whisky, Speyside Glenlivet: Retail $170. 40% ABV. On the nose, this is pretty spectacular with vanilla, butterscotch, and a slight hint of orange peel. The palate is equally impressive with an initial nuttiness (walnut?), an implied sweetness, nougat, reduced honey, a spicy oakiness, and a waxy wood polish texture. Wow. Woody and charred on the finish with the essence of a well-done croissant just before it starts to burn. Yowza. Outstanding. 93-95 Points.

I have been an occasional cycling tour guide in Europe for the past 20 years, visiting most of the wine regions of France. Through this "job" I developed a love for wine and the stories that often accompany the pulling of a cork. I live in Houston with my lovely wife and two wonderful sons.
View all posts by the drunken cyclist →
This entry was posted in Scotch, Whiskey, Whisky, Wine. Bookmark the permalink.