This past July marked the fourth (!) anniversary of our great migration south; we had spent sixteen years in Philadelphia but packed it all up and moved to Beverly, er Houston. Prior to 2016, I can honestly say that I never once considered moving to the south, much less to Texas. Four years in? I have to say that I am legitimately disappointed: disappointed that I don’t hate it.

There are numerous reasons to like/love Houston, many of which I have iterated previously in this space. Namely, it is relatively inexpensive to live here, my wife job affords her a much nicer salary than she had in Philadelphia (although my meager “earnings” remain largely unchanged), the food scene is at least on a par with Philly, the wine scene is far superior to our previous situation, and the people here are really nice (yes, many of them have guns, but…).

There is one aspect about life in Houston that I do not like even remotely, however.

August continues unabated and I remain here in Texas suffering through the (so far) three hottest weeks of the summer. This past week, we breached the 100°F mark (38°C) with the humidity vying to get a perfect score as well (that would be 100% for those of you not picking up what I am putting down).

Other than the heat, Texas is unique. (Notice I did not say “really unique” or “rather unique” as something is “unique” or not–no qualifiers needed. Yes, this is a pet peeve of mine.) I have visited 49 states, received mail in a dozen of them, and Texas is far and away the “proudest” state that I have experienced. Sure, there was a section in the state liquor stores in Pennsylvania (the PLCB) that had small, pathetic sections devoted to PA wines, but I am pretty sure that state law mandated such displays (I will verify).

In Texas? It is a completely different ballgame. Every wine shop and grocery store I have visited in the state has not only had a Texas Wine section, but it was also the best-stocked element of the wine program.

It does not stop there, however. For many products, from flour to salsa, there are Texan products displayed prominently and, apparently, selling very well. It is not limited to supermarkets, however. At virtually every stoplight here in Houston, I will see at least one pickup truck with a decal indicating that either the vehicle was built in Texas or that the driver was “made” here.

I just have not seen that in other states.

I am not sure if that is due to the “Don’t Mess with Texas” mantra or the fact that the state was its own country for a decade.

A brief history of the Republic of Texas: On March 2, 1836, the Republic of Texas declared its independence from Mexico. A decade later, on February 19th, 1846, Texas was annexed by the United States and became a state that same day. Sam Houston, who lent my current home city its name, served two terms as president of the Texas Republic.

While I was not able to verify the following claim, the Houston Livestock Show and Rodeo typically begins at the end of February/beginning of March. To celebrate the start of the rodeo, folks in Houston celebrate “Go Texan Day” in which children (and many adults) dress in traditional Texan garb (yes, I am sure to wear my cowboy boots on “go Texan Day”). Coincidence that it corresponds to Texas Independence Day? You can decide.

Today’s wines come from Brennan Vineyards in Comanche, Texas, to the southwest of Dallas and northwest of Austin. Founded in 2001, the winery produces a couple dozen wines from (mostly) the Texas High Plains appellation. 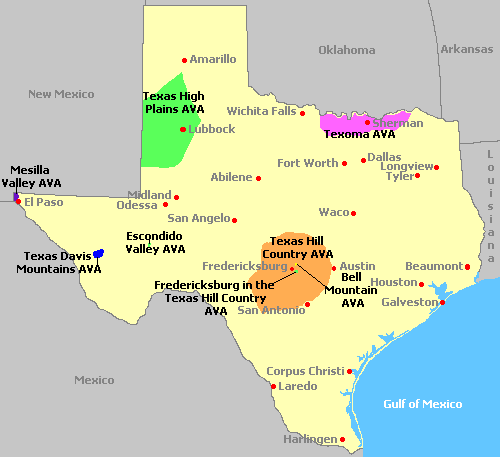 2019 Brennan Vineyards Mourvèdre Rosé, Comanche County, TX: Retail $22. 85% Mourvèdre, 15% Muscat of Alexandria. I did a bit of searching, but I could not determine whether this is a True Rosé or not. I will have to dig deeper. Just a hint of color in the glass, but plenty of aromas–mostly from the fragrant Muscat: lychee, white flower, wild strawberry. The palate is loaded with fruit: slightly under-ripe strawberry, orange rind, peach. There is also plenty of acidity that balances out all of that fruit. An Excellent rosé. Very Good to Excellent. 89-91 Points. 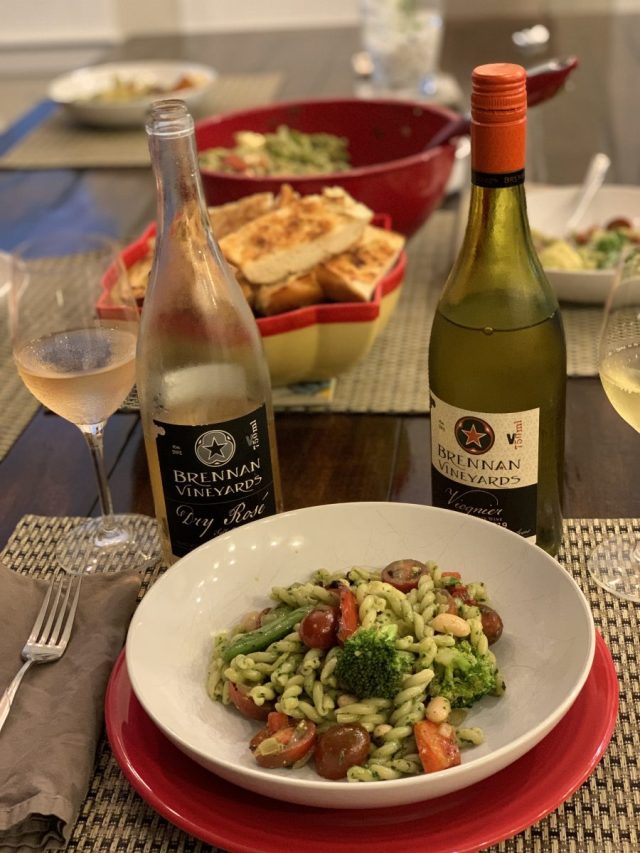 2019 Brennan Vineyards Viognier, Comanche County, TX: Retail $22. Under screwcap. Light in the glass, just a hint of color with wonderful tree fruit on the nose, pear, peach, even a bit of bright citrus acidity. The palate is, well, wonderful. Great fruity, searing acidity, and a floral, lengthy finish. I’ll be honest, I am not a fan of Viognier–it is usually too floral, a bit astringent, a bit, well, soapy. Not here. Not at all. While it might fall short of the transformative wines from Condrieu, this is an excellent representation of the genre. Excellent. 90-92 Points.

2017 Brennan Vineyards Cabernet Sauvignon, Texas High Plains, TX: Retail $30. 75% Cabernet Sauvignon, 25% Alicante Bouschet(?). Details on the blend and appellation are a bit scant, but I am fairly confident that this wine is both majority Texas High Plains and Cabernet Sauvignon. Really dark in the glass in both color and aromas (blackberry, mocha, cassis, plum), but much less brooding on the palate. Sure, there is fruit, but there is also plenty of tart acidity, close to lip-smacking, in fact (and that is a *good* thing). There is a bit of depth (but the is the real story) and a solid finish, but the tannins are subtle–to be consumed in the near-term. Very Good to Excellent. 88-90 Points. 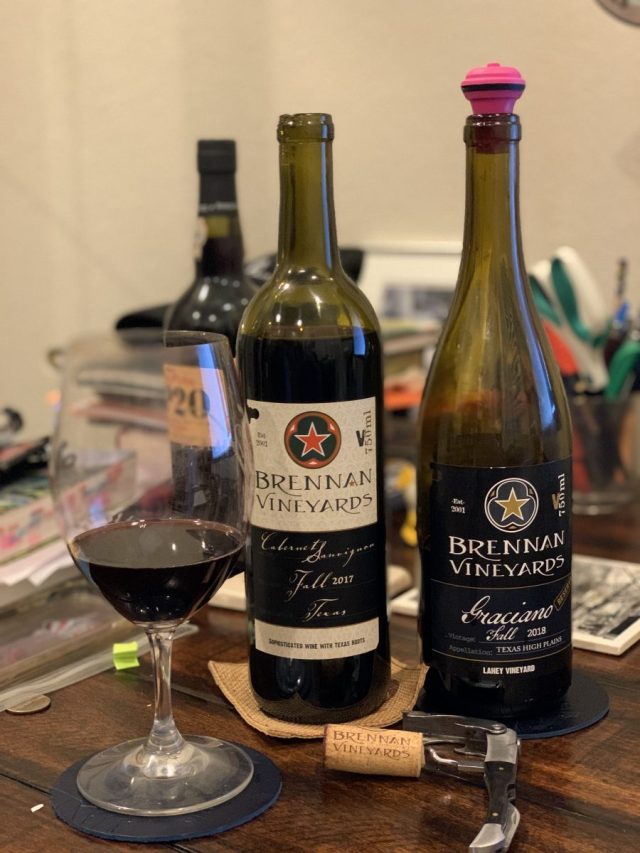 2018 Brennan Vineyards Graciano Reserve Lahey Vineyard, Texas High Plains, TX: Retail $46. 100% Graciano. OK, Graciano is fairly difficult to come by in Spain, let alone Texas. Known primarily in Rioja (where it takes a decided backseat to Tempranillo and even Garnacha, Graciano is at best, usually, a blending variety. To taste a 100% varietal Graciano? Whoa. Fruity. Really fruity. Really, really fruity. Did I mention the fruit? Dark in the glass with all the dark fruit you can imagine: blackberry, plum, cassis. Also, tons of black pepper, a bit of anise, and some allspice. The palate is, well, fruity, but there is also acidity and a considerably lengthy finish. I really wanted to dislike this wine (why? ask my therapist), but it is fantastic (if you are a fan of the fruit, that is). Excellent. 91-93 Points.

I have been an occasional cycling tour guide in Europe for the past 20 years, visiting most of the wine regions of France. Through this "job" I developed a love for wine and the stories that often accompany the pulling of a cork. I live in Houston with my lovely wife and two wonderful sons.
View all posts by the drunken cyclist →
This entry was posted in Alicante Bouschet, Cabernet Sauvignon, Graciano, Mourvèdre, Texas, Wine and tagged Texas. Bookmark the permalink.