Looking for Wine on College Tours–Los Angeles, CA and UCLA

Last week, I shared a first post about my travels and travails with my older son, Nathan, as we embarked on a series of trips to explore those colleges and universities where he had applied and been accepted. The goal, of course, was for him to determine which school best fit his needs. The problem? My son has a very difficult time making decisions.

For our second trip, we flew to Los Angeles where we rented a car and were going to drive up the coast, visiting four schools: UCLA, UC Santa Barbara, Cal Poly San Luis Obispo, and UC-Berkeley. I would then drop him off with his cousins in the Bay Area and I would continue north to Healdsburg, in Sonoma County, where I would spend a few days riding my bike, catching up with friends, and, yes, tasting some wine.

Once we set up the trip, there were a couple of problems that materialized. First, I realized that it had been well over a year since I had either been to an airport or been on an airplane. Heck, it had been that long since I had even sat next to anyone other than my wife, kids, or in-laws. By the time of the trip, I was fully vaccinated, which offered some comfort, but still… It was going to be weird.

The second complication? Just a couple of days before leaving, Nathan learned that he did not, in fact, get accepted to Berkeley. So, did he still want to drive all the way from Cal-Poly to the Bay Area, a good five-hour drive (I had planned to take him up the Pacific Coast Highway, through Big Sur and Monterey, one of the more spectacular stretches of road I’ve ever driven)? 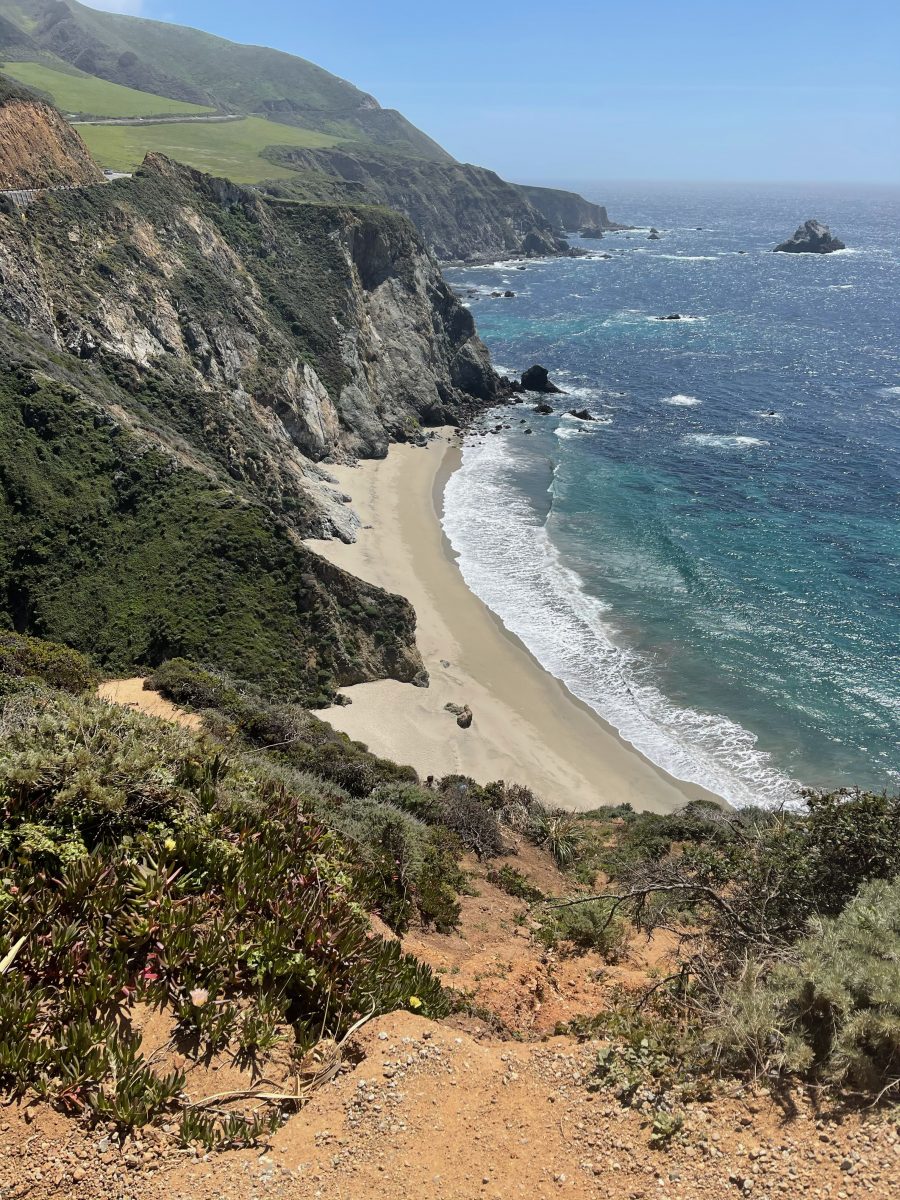 How would you not want to drive along this?

Since the airlines were offering free changes/cancellations it would not be all that big of a deal to change the tickets and leave from San Luis Obispo. Much to my surprise (and relief), he decided that he wanted to keep the plan intact and he would visit his cousins in San Ramon (allowing me some alone time in Sonoma).

Once again, I promised that I would keep my “work” to a minimum, I would not visit wineries (while he was with me), and I would limit any wine consumption to dinner. These trips were all about him. I had no idea how difficult it would be, driving through Santa Barbara County, passing vineyard after vineyard, and not stopping other to get gas, lunch, or find a restroom. Yes, I spent a few days in some of the greatest wine regions in this country and all I tasted was the local Coke Zero.

We started in Santa Monica, which was our base to visit UCLA, where we were to meet up with the aforementioned cousins to check out UCLA. I was worried. UCLA is a beautiful school, with a fine reputation, that also would cost us over $80,000 a year to send him there. Do the math. That would be a cool quarter of a million freaking dollars by the time he graduated.

We spent the day checking out the beach (which he hates, so that was quick), walked a bit on the Hollywood Walk of Fame, and drove up to the Hollywood sign.

If you look closely, you can see the sign. We almost got a ticket since we hopped out of the car in the middle of the road to take this picture. Neither one of us noticed to cop right to our left in this photo, who started yelling at us almost immediately.

Our visit, such as it was, was strange–we were not allowed to go into any buildings (other than the book store) and saw maybe a dozen students total on a campus that has in excess of fifty thousand. While he liked it (?), he intimated by the time we were back in Santa Monica, that he had crossed it off his list–just too big for him. 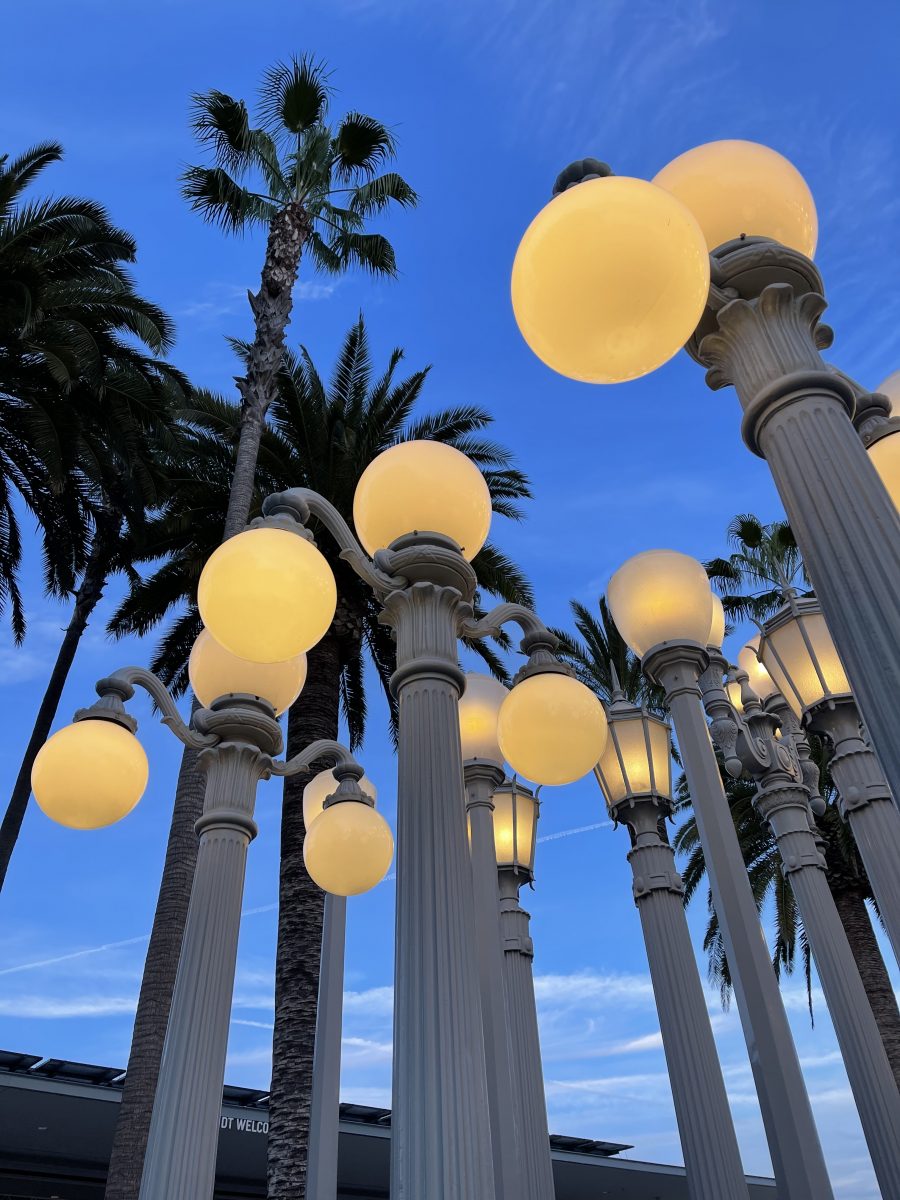 I love palm trees and the Urban Light installation by Chris Burden (2008) served as a stunning contrast.

The first night, we went to Wally’s of Santa Monica, a fabulous wine bar and restaurant which was a five minute walk from our hotel. I opted for the Non-Vintage Pierre Peters Cuvée de Réserve, Blanc de Blancs: Retail $65. Even though it was a blanc de blancs, I opted for this Pierre Peters who is probably personally responsible for the Grower-Champagne craze that dominates the bubbles scene in the U.S. these days. Mineral and a bit earthy on the nose with some citrus and under-ripe pear. Yowza. The palate has a fervent sparkle and some fabulous tartness initially with the fruit coming in shortly thereafter. I have maintained for a while that BdB is not my preferred style, but as I taste more Chardonnay champagnes, the more I become enamored. And with Pierre Peters? Whoa. Outstanding. 93 Points. 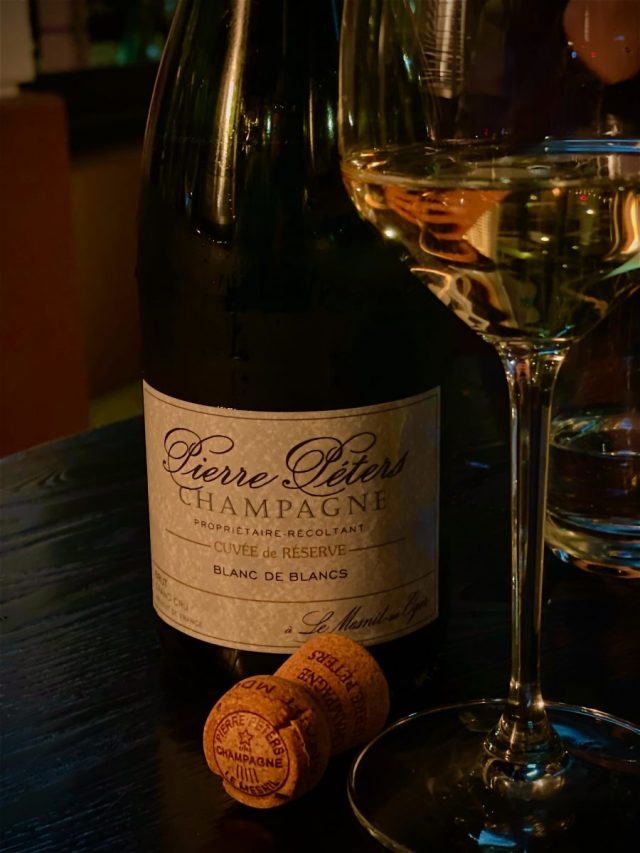 I have been an occasional cycling tour guide in Europe for the past 20 years, visiting most of the wine regions of France. Through this "job" I developed a love for wine and the stories that often accompany the pulling of a cork. I live in Houston with my lovely wife and two wonderful sons.
View all posts by the drunken cyclist →
This entry was posted in Champagne, Wine. Bookmark the permalink.