Even for the casual observer of this blog, I think it is pretty clear that I am no fan of the repost. I am not sure why that is, but I think it stems from the fact that I prefer to write new material instead of rehashing previously published material (with the notable exception of Sundays Are For Sebastian). This week, however, I have decided to set aside that predilection. After roughly sixteen months of not leaving Houston, I have been on the road for a solid two weeks with another yet to come. First, I was out in Oregon, riding my bike, visiting some wineries, and then attending the Wine Media Conference in Eugene. This week (and next) I am driving up to Cleveland (and then back) to drop my son off at Case Western Reserve University for his first year of college. Yeah. As such, I have had very little time to write, thus the reposts.

This year, the Tour de France once again climbed Mont Ventoux, one of its more famous climbs (not once, but twice–in the same day!). Once upon a time, I climbed the mountain as well and I wrote the following about my experience. This is the last of three installments. To start from the beginning, see Part One and then Part Two.

The next 5k were a blur. Not because I was moving quickly, but rather because my vision started to get blurry. I passed the Tom Simpson memorial. Tom Simpson was a British racer who had died in the 1967 Tour while climbing the Ventoux. He was amped up on amphetamines and alcohol (and an apparent lack of common sense), but a sad story nonetheless. There is a monument where he died that has become a shrine of some sort for cyclists and riders to leave a water bottle at the monument out of respect, some sort of tribute.

As I passed, I was hoping someone had left a Snickers bar that I could scarf down. I figured Tom would have understood. No such luck. And there was absolutely no way in hades that I was going to leave MY water bottle at the memorial. Are you flipping nuts?  It was the ONLY thing keeping me alive. I am sure good ol’ Tom would understand that.

With about two k to go, Mike, the guy who had left me so long ago was coming back down.  He slowed and asked how it was going. I said the guy was a good climber, I never said he was all that perceptive. This time I made no mistake. I said: “foooOOOD!!!” He said, “oh, sorry dude, I’m all out.” I think I cried, but I am not sure. He then said: “Just pace it out. The last mile is a total bitch.” Oh, good. The first eleven miles were a piece of cake—I was hoping for a challenge; I was starting to worry that it was getting too easy. (By the way, “piece of cake” is a stupid expression, I would have committed any series of felonies for a piece of stinking cake.)

About 200 meters from the top, there is another café. For one brief second, I actually considered going to the top first, and then back down to the café. Well, not really. I never thought that at all. I was actually thinking about what I was about to order — I had visions of Fielding in Caddyshack:

I rolled into the café, let my bike fall, staggered in and ordered everything I saw. A Pepsi, a Coke, a Twix, two beers, a pastry, three postcards, an omelette, a map, a pack of cigarettes, and a shot of schnapps. I just kept ordering. I think it came to the equivalent of $78.11, but I would save that calculation for the rest of the climb. I ate everything in about 37.2 seconds.

Back on the bike and up the last two hundred meters. Took some photos and then headed down. I passed the other two (and Mike who was helping to pace them up the last k or two) and they said something to me. I hope I did not curse at them, but I can’t be sure, I was still rather delirious from the climb up. 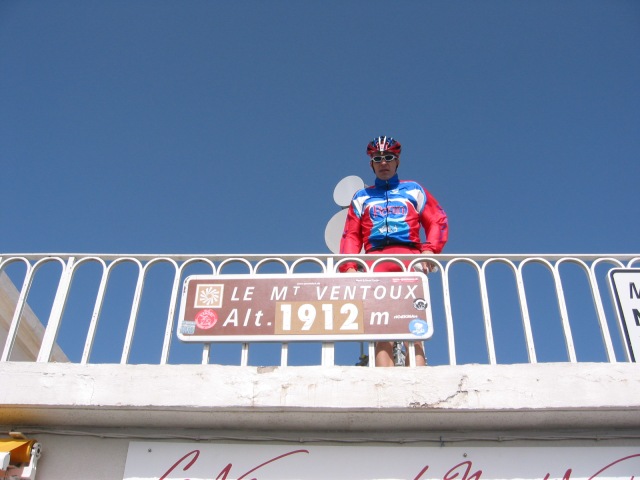 That’s me at the top. Almost did not get this picture since it required going up some stairs.

6k down and I stopped at the first café. I waited for a while, anticipating the others would be coming down soon. They didn’t. So I figured I had some how missed them going down and they were all waiting at the bottom, so I bombed on down. What a truly great descent. It was unbelievable with only a few hairpins to really slow you down. There were the flies that were acting like shotgun pellets at that speed of course, but I was flying.

23 seconds later it was over. Oh well.

At the bottom I found a café, which was about to stop serving food until dinner (it was about two in the afternoon and they were going to stop serving food?–gotta love the French). I briefly considered waiting for the others…. Who the hell am I kidding? I never hesitated, not for even a second. In my mind, I was left to die on that mountain. Screw them, I ordered: a sandwich as big as my head, a coke, and a pichet of rosé (sure I was exhausted and alcohol helped kill good ol’ Tom, but you still have to be civilized while in France, right?).

While in the café, I chatted with a group of really old guys who had just come down as well. One of them was 74 and had just finished his 36th ascension of the Géant. Two and a half hours this time for him—I can only hope to post that kind of time in about 30 years. The other five finally found me and they kindly bitched me out (people from Boulder have no idea how to “bitch” people out, though, so this is a relative comment—had they been from Philly, well…) because “we” had apparently planned to go down the other side and loop back around. Clearly riding in Philly develops one differently for the mountains than riding in Boulder. But I did not care.

I had survived the climb.

I was back in sunny Provence.

I ordered another pichet of rosé. That, they would be serving all afternoon.

I have been an occasional cycling tour guide in Europe for the past 20 years, visiting most of the wine regions of France. Through this "job" I developed a love for wine and the stories that often accompany the pulling of a cork. I live in Houston with my lovely wife and two wonderful sons.
View all posts by the drunken cyclist →
This entry was posted in Cycling, Humor, Rosé, Wine. Bookmark the permalink.