Posted on September 13, 2021 by the drunken cyclist

NV Paul Berthelot Champagne Premier Cru Eminence, France: Retail $45. 70% Pinot Noir, 30% Chardonnay. Based on the data here on Cellar Tracker, this is the 18th bottle of this wine that we have opened. I purchased two cases from Last Bottle and more than 2/3 of those consumed have been stellar. This one was not. Still very good, with a lovely citrusy, yeasty nose, the palate was where there was a decided departure from the solid majority of bottles we have popped thus far. Sure, there was fruit and some yeastiness but both on the palate and the nose, there is a noticeable flinty, dirty, metallic aspect that really should not be there and is quite off-putting, frankly. Very Good. 88 Points.

2013 Ehlers Estate Merlot St. Helena, Napa Valley. CA: Retail $55. 95% Merlot, 5% Cabernet Franc. I bought six bottles of this wine back in 2018 from Last Bottle and I honestly am kicking myself for not having bought more. I have been a fan of Ehlers Estate, or more precisely of winemaker Kevin Morrisey, for several years now, so when I saw this Merlot pop-up on the site, I leapt and bought half a case. I should have bought more, a lot more. A whole lot more. While Ehlers is in the heart of Napa and Cabernet country, perhaps Kevin’s best wines were his Merlots (although his Cab Francs were pretty darned good as well). Rich blue fruit, a bit of heft (more than your average Merlot) and spice (black pepper in particular) characterize this wine, which is downright tasty. Another gem by Kevin Morrissey, why did he ever leave Ehlers? Outstanding. 93 Points.

2015 Kaiken Cabernet Sauvignon Ultra, Mendoza, Argentina: Retail $20. 90% Cabernet Sauvignon, 10% Malbec. Under cork. On my only visit to the winery, back in 2017, I was impressed with this wine. So impressed, that I bought a couple of bottles to bring back to Houston. Yes, I laid down some of my “hard-earned” cash to “smuggle” back a few wines from Kaiken and this Cab did not disappoint. At. All. Quite dark with black fruit (plum, blackberry), mocha, and anise on the nose, this is already close to a whoa. The palate is surprisingly fruity, lush, tart, and fantastic (I expected a much more brooding, introspective wine). At twenty bucks? This over-delivers, serving as both a crowd-pleaser and a more serious wine, a tightrope that is walked by so very few. Excellent. 91 Points.

NV Mailly Champagne Grand Cru Brut Réserve, France: Retail $42. 75% Pinot Noir, 25% Chardonnay. 100% Grand Cru. Perhaps I was in a bit of a mood, or maybe it was not one of those ridiculous “fruit” days on the biodynamic calendar. For whatever reason, this Mailly fell a bit short of expectation. Sure, it was still very good, but it was lacking in the creamy, yeasty, buscuity department. Yeah, there is one of those departments. And there was a metallic aspect on the finish. Since I just bought another case of this wine, here’s to hoping for bottle variation! Very Good. 89 Points.

2002 Nicolas Feuillatte Champagne Brut Cuvée Palmes d’Or, France: Retail $140. 50% Chardonnay, 50% Pinot Noir, 100% Grand Cru. My wife bought this for me a few years ago for my birthday, so I figured it was appropriate to open it tonight for hers. It has been a while since I have had any Tête de Cuvée, let alone a Palmes d’Or, so it took me a few glasses to get back into that aged-champagne acquired taste mindset. Once I did? Whoa, for sure. Rich golden color with a faint sparkle and loads of citrusy, yeasty goodness. Fantastic. There is even more of that aged-champagne loveliness on the palate. Holy cow. Almost an aged Sauternes type of sensation (without the sweetness), or a slightly oxidized Premier Cru white Burgundy. Lengthy, luscious, lovely. Outstanding. 94 Points.

2002 Viader Proprietary Red, Napa Valley, CA: Retail $115(?). 60% Cabernet Sauvignon, 40% Cabernet Franc. When I opened this bottle, I had absolutely no idea how this wine came into my possession. After I poured a glass for my wife, she informed me that the bottle was sent to us by her uncle–he was moving and thought we might appreciate it. We did. Dark, perhaps really dark, with mostly secondary and tertiary aromas: anise, cigar smoke, blackberry, cassis. Whoa. The palate is perhaps more enticing with subtle fruit, balancing tartness, and just a touch of well-integrated tannins. Lovely. Outstanding. 93 Points. 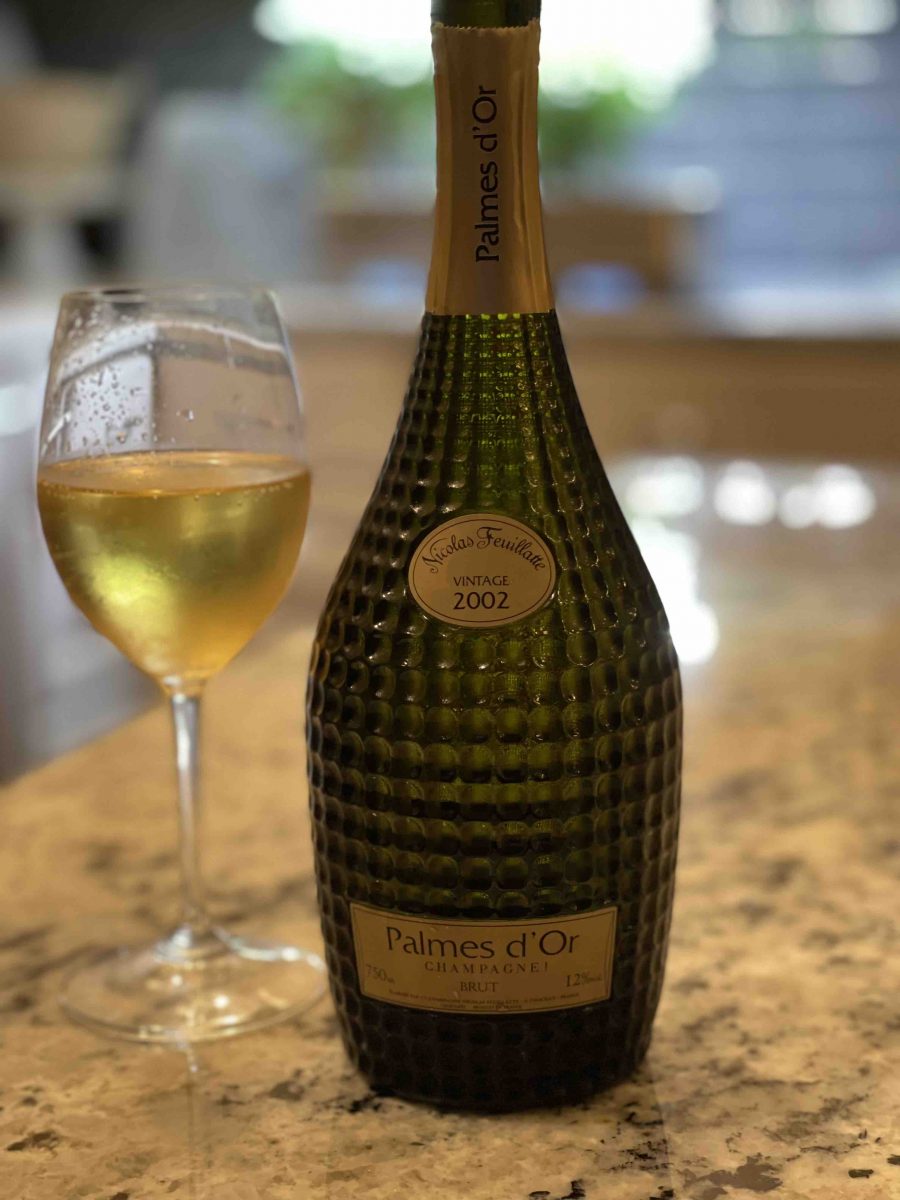 WINE OF THE WEEK: This week, was the story of a few “haves” and a few “have nots.” Among the haves was the stellar Ehlers Merlot, which really was a steal for what I paid for it; the 2002 Viader, which was a gift from my wife’s uncle (he found it while moving and had no idea whether it was any good or not); and this week’s Wine of the Week, the 2002 Nicolas Feuillatte Palmes d’Or. I picked it as the top wine of the week for a number of reasons: great wine, cool bottle, and it was a gift from my wife. Oh, and Tropical Storm Nicholas has its sights set on Houston today and is supposed to hit right about the same time my plane is supposed to land. So there’s that.

I have been an occasional cycling tour guide in Europe for the past 20 years, visiting most of the wine regions of France. Through this "job" I developed a love for wine and the stories that often accompany the pulling of a cork. I live in Houston with my lovely wife and two wonderful sons.
View all posts by the drunken cyclist →
This entry was posted in Cabernet Sauvignon, Champagne, Chardonnay, Malbec, Merlot, Pinot Meunier, Pinot Noir, Sparkling Wine, Wine. Bookmark the permalink.