Tales of a Cycling Tour Guide: The White Fish of Rambouillet

Posted on October 6, 2021 by the drunken cyclist

I spent the majority of last week out in Walla Walla, Washington riding my bike and drinking oodles of fabulous wine. It was my first real press trip in almost two years and while I was out riding through the incredible countryside (riding on the Pelouse is stunning), I realized that a) I have really missed traveling and b) I have been quite fortunate to have already visited countless interesting places already. As I was peddling up, down, and around the hills of Eastern Washington, I started making a list of some of the perhaps lesser-known spots I’ve visited that have a story to tell.

Rambouillet is a town about 60 kilometers to the southwest of Paris and it served as the first stop on the brief four day trip from the center of Paris to the tiny town of Châteaudun, which served as the launching point for the company’s Loire Valley trip, which started just a few dozen kilometers to the south in Blois (more on that at some point).

The focal point, without a doubt, was a stay in the town of Chartres, known throughout the world for its asymmetrical cathedral. At first, I really didn’t “get” Chartres; I mean, really, you couldn’t rebuild the burned-down spire to match the other one? After a handful of visits, however, I started to understand the majesty of my now-favorite cathedral (I am getting goose bumps writing this). As with Blois, I plan to write much more about Chartres, but this post is about the relatively smaller town (25k to Chartres’ 40k–both 2015 figures). 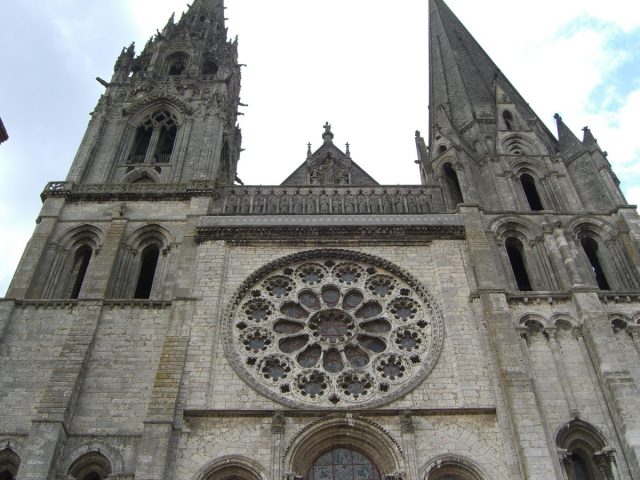 Chartres. I have better photos, but…

Rambouillet has a château, but I have never been. The first edifice dates back to the l

But I have never been.

Of course the French make it work, but honestly? Châteaux in French are essentially a dime a dozen and you have to pick your battles–visit too many of them and you miss out on those that really are spectacular (e.g., Chenonceaux, Chambord, Amboise, etc.).

Ain’t never been there, they tell me it’s nice.

The point of this story, however, is not Chartres, not the Château de Rambouillet, not even Napoléon. It’s the effing forest. I really have no intrinsic animosity to the wooded area whose history dates back to the 7th (?) century. It really is lovely and, under normal circumstances, would be quite the pleasant pedal. But.

I was the tour guide (pronounced “geede” in French) and. apparently, that means I should know where the heck I was going. Problem: I have yet to meet another human whose sense  of direction is worse than mine (OK, I actually have met that person–it’s my wife–which is not germane to this conversation, but it has put our children in peril at least several dozen times).

The trips I led through the region were some of my first, however, and I thought, naturally, that I was supposed to lead them. Thus, I was at the front of the pack, from start to finish, “leading” my charges like, well Napoléon did into battle (OK, poor example since he rarely [ever?] did that, but I am trying to tie things together here). In the days before GPS, this posed a problem as at just about every turn, I took the wrong one. The result? A ride that should have taken us a couple of hours turned into six.

The Rambouillet Forest. I am pretty sure we did not ride along this “road’–I am not *that* bad. From wikipedia.com

Yeah. As my son would say: #EpicFail

As a result, we got into town late (oh darn, no time to visit the château), which meant that the already meager dining choices were even further limited, particularly for a group of ten. Eventually, shortly after nine, I was able to find a “restaurant” that would take us. To call it a “restaurant” was a stretch–it was more of a glorified middle school cafeteria, and it was certainly not glorified.

Pretty close to the experience in Rambouillet. And yes, the exception was the bread–fantastically good.

The server, once she eventually decided to come over, was stressed out. Even though there was no one else in the “restaurant” (or maybe because of it), she wanted to rush our order through. Very anti-French. While I have a boatload of issues with my adopted country, the way they treat dining in general, and diners in particular, is above reproach.

When I asked for the wine list, she responded quickly and coldly: “we have white, red, and rosé.”

Wait. Huh? Did I get so lost that I ended up in Arkansas?? This is freaking France still, non?

I ordered a couple of carafes and then started in on my translation of the menu, which was not going to take long as there were three items: hamburger, steak (with fries), and, well, something else. Let’s make it clear: my job was (essentially) to fix bikes, know the route, and translate the menu. It was our first day, so bike issues were nil, I got lost in the Rambouillet forest (several times), and there was an item on the menu about which I was completely clueless.

In my time of studying in France and my limited time as a geede, I knew that the French had far more white fish than we saw in the U.S. Go ahead, think of as many white fish as you can: cod, halibut, even swordfish and catfish. Now multiply that number by about seventeen–that is close to the number of whitefish available in France.

So? The item I did not know I translated as a “whitefish.” Seemed like the odds were in my favor. Looking around the place, however, I estimated that the “steak frites” was the safest option (as an aside, working this “job” I really learned how to order based on the locale, the other diners, the local customs, but that is for another post).

Said “whitefish” on the menu was “boudin.”

Now, every resident of Texas, Louisiana, and Mississippi (among others, no doubt) know that “boudin” is a style of sausage. Here in the South, it usually includes entrails (intestines, organs, testicles, all kinds of crazy, well, sheet). In that part of France? It is short for boudin noir or blood sausage.

So, after a really long day, countless wrong turns, and having to run to dinner before showering, my brood was faced with an almost black tube, which, once you cut into it, oozed a purplish-black liquid. And if you spent even a third of a second thinking about it, you quickly realized: it was blood!

While the French seem to love their boudin (noir), I am pretty sure it is not a hit with Americans. Particularly that night.

Fearing being exiled to St. Helena (or beyond), I ordered more “red” and “white” even some “rose.’

And tons upon tons of “frites.”

Do you want to travel by bike with me in Europe, tasting great wine, eating fantastic food, and having just a boatload of fun? Send me an email as I am organizing trips for next Spring (jeff (at) thedrunkencyclist (dot) com). I would love to hear from you!

I have been an occasional cycling tour guide in Europe for the past 20 years, visiting most of the wine regions of France. Through this "job" I developed a love for wine and the stories that often accompany the pulling of a cork. I live in Houston with my lovely wife and two wonderful sons.
View all posts by the drunken cyclist →
This entry was posted in Travel, Wine. Bookmark the permalink.

3 Responses to Tales of a Cycling Tour Guide: The White Fish of Rambouillet