Posted on October 5, 2021 by the drunken cyclist

It is my contention that about 90-95% of the population would like to be either two inches taller or two inches shorter. I have never conducted an actual study of this hypothesis, but the anecdotal evidence I have collected seems to suggest that I am correct.

At 6’4″ I am considered by most to be “tall” and, in fact, given that the average height of an American male is around 5’10” and the standard deviation is 3″ that would mean that I am as tall or taller than 95% of the population.

And I would love to be shorter. Love.

Sure, there are advantages to being tall: lower risk of dementia, higher pay, tall people might be smarter, and, of course, we can reach the stuff on the upper shelves (which is why, I am convinced, my wife agreed to marry me).

While all of that is just fine and dandy, there are perhaps more disadvantages to being what my brother (5’9″) likes to call “freakishly tall.”

While not everyone would agree with my earlier stated hypothesis about individual height (and those tend to be people who are slightly above average in stature, 6’0″-6’2″), when I received my first batch of mini-wine bottles to review, I thought: “Am I the only one that thinks this is, well, stupid?”

As I have mentioned many times in this space, when reviewing a wine, I like to taste it several times over the course of an evening (or even several evenings) to see how the wine evolves over time and with the exposure to air. You know, how most people experience wine.

When I received a series of mini-wine bottles for the Vins d’Alsace Digitasting, each 30ml (just over an ounce), I thought it was perhaps the dumbest idea in the world. But it wasn’t. Sure, I would have preferred to have had a bit more than two small sips of wine, but the wines did show very well, and the conversations I had over Zoom with the producers were fantastic.

Does this make me a mini-bottle convert? Hardly, but it might cause me to be a bit more understanding to all those tiny people taking up the primo seats on airplanes and seeing them as the perfect spot for yoga (not really, I will still give them the stink eye every time, but I was trying to pull it all together here).

[Note: the tiny bottles were only for the tasting, they are not, as far as I know, available commercially.]

I wrote about the first two wineries I “visited” a few weeks ago, and then the next three a couple weeks after that. Here is the final installment.

Domaine Kirrenbourg was a particularly compelling producer for me since it is located in the wonderful town of Kaysersberg, where I have spent countless nights as it is a key stop on the bike trip that I used to lead through Alsace. While Riquewihr and Ribeauvillé garner more tourists, perhaps, Kaysersberg, for me at least, is a more “genuine” village in Alsace.

At just six years old, it is a new domaine by French standards and the wines, particularly for the region, are at the upper end of cost with the Grand Crus in the 40€ range and the Pinot Noir right at 38€.

Also a bit of a rarity in Alsace, Domaine Kirrenbourg is not a family business, but a collection of 30-35 year olds “who love the terroir.” The Domaine has a total of 10 hectares (23 acres) 7 in the Schlossberg and 3 in the Brand, all biodynamic. 2018 Roche Granitique Pinot Noir (93 pts). This wine comes from the Brand, but from younger vines. Dark in the glass, one of the darkest Alsatian Pinot Noirs I have seen. And the nose is fantastic. The palate? Whoa. One of the juiciest, fruitiest Pinots I have tried from Alsace. Yowza. The 2018 Terroir B Pinot Noir (96 pts) is also from the Brand (Grand Cru) with vines that are 60-70 years old. A richer, deeper nose than the previous, but with similar characteristics. Whoa. Another wine that is just off the charts phenomenal that will turn your idea of Alsace Pinot upside down. Yikes. The 2018 Schlossberg K Riesling (95+ pts) is a bit golden and viscous from a special lieu-dit within the Schlossberg. It is only made from the best vintages, with only 3,000 bottles (250 cases) produced. Rich, tart, fruity, expressive, holy cow. Last, the 2018 Riesling Brand (97 pts). “The big legend (we have a lot of legends in Alsace) is that ‘Brand’ translates into ‘the burned ground’ which comes from the legend of a dragon that lived in Alsace and had a fight with the sun and warmed the land—which now helps with keeping the ground warm.” Oh my goodness is this fantastic. Rich, deep, layered. Another Holy cow and a Whoa. 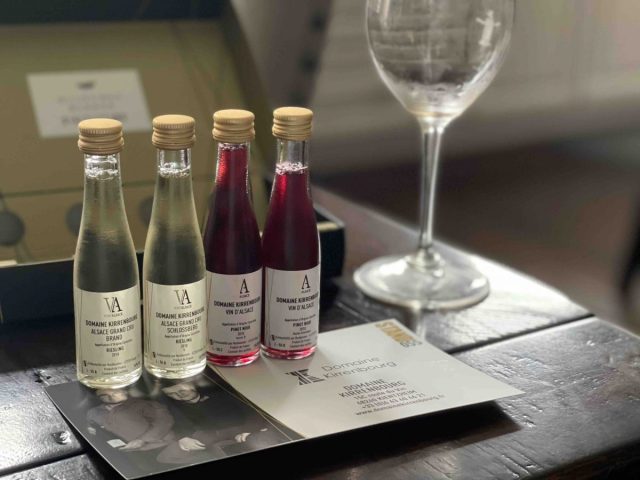 The next producer on the docket, Les Vins d’Alsace Schoenheitz, comes from the Munster (yes, the cheese comes from here as well) Valley, which has no grand cru vineyards, but a long history of winemaking.

The Schoenheitz family immigrated from Tyrol and started making wine in the Munster Valley in the 1830s. Most of the vines, however, were destroyed during the two world wars that ravaged the area and the family stopped making wine, instead focusing on agriculture. Henri Schoenheitz started planting vines again in the 1960s and 70s but did not make wine, selling the grapes to a cooperative in Turckheim. The next generation (Dominique and his older brother [also named Henri]) , however, started making wine in 1980. The Munster Valley has always produced a lot of the Pinot varieties and before the wars, it was mostly red with Pinot Noir and Gamay dominant. That has shifted since the war, with much more white planted and produced. 2017 Pinot Blanc (92 pts). Pinot Blanc is closer to Chardonnay (which is actually Pinot Chardonnay) than it is to Pinot Gris. Old vines. Quite a bit of structure and body and explodes with fruit. Perhaps the best Pinot Blanc I have had, certainly from Alsace. 6,600 bottles (550 cases) produced. 2017 Linsenberg Riesling (91 pts). 4200 bottles (350 cases). Steepest slopes of the vineyard, facing full south very stony and granite soils. Wonderful on the nose with plenty of fruit, minerality and salinity. Fairly austere on the palate but quite lovely tartness and lengthy finish. 2018 Riesling Herrenreben (93 pts). Highest elevation, one of the highest in Alsace at 500 meters (1,600 feet). Same type of soil as the Schlossberg and has been planted as a vineyard since the 15th century. Name means “vineyard of the nobleman.” Oldest vines in the domaine. Rich and unctuous, this is particularly full-bodied while still a bit light on fruit. Fantastic. 4500 bottles (375 cases). 2018 Pinot Noir St. Gregoire (92 pts). Pinot Noir is not yet officially allowed in the appellation. Another south-facing vineyard with plenty of iron in the soil, two reasons for the darker color. Lovely fruit, great body. Wonderful.

There were a couple of reasons that I wanted to visit with the last producer on my list, Gustave Lorentz. The first is that they are widely distributed in the U.S. and I have become quite familiar with the brand through their importer, Quintessential Wines. The other was their proximity to Haut-Kœnigsbourg, an amazing medieval castle that was completely restored in the 19th Century (and a must-visit).

Gustave Lorentz is a family-owned winery, now run by the sixth generation, and three daughters will be seventh generation and the first female generation. In 1836, the domaine was established in Bergheim, just north of Ribeauvillé. They control 33 hectares (76 acres) of vineyards and since 2012 all have been organic. The simple goal of the domaine is “to produce gastronomic wines that are very food friendly.” They do not distribute to big chain stores as the desire is for the wines to be hand-sold, with an emphasis on the story of the family and the region. 40% is sold in France, while 60% is exported. 2017 Kanzelberg Riesling (93 pts). The smallest grad cru in Alsace, and Lorentz owns half. Heavy clay with gypsum which leads to higher acidity. Rich and expressive nose, lovely. Whoa.  Rich, but clearly acid driven, controlling the wine from nose to finish. Fantastic. 2016 Altenberg de Bergheim Vielle Vignes (97 pts). The vines are all around 60 years old. Steely, rich, fruity, layered. Holy Cow. This is a wine for the ages. Just a baby and in this format, it is hard to judge, but Whoa. 2012 Gewurztraminer Altenberg de Bergheim (93 pts). 8-9 years of bottle age. Wonderful nose of lychee and mango, white flower. Sweet, but far from unctuous, this is wonderful. 2015 La Limite Pinot Noir (94 pts). Fairly dark in the glass with sweet Bing cherry and lovely earth notes. Among the best Pinots from Alsace I have ever tried.

I have been an occasional cycling tour guide in Europe for the past 20 years, visiting most of the wine regions of France. Through this "job" I developed a love for wine and the stories that often accompany the pulling of a cork. I live in Houston with my lovely wife and two wonderful sons.
View all posts by the drunken cyclist →
This entry was posted in Alsace, Gewurztraminer, Pinot Gris, Pinot Noir, Riesling, Wine. Bookmark the permalink.