It is once again time to tackle the tower of tiny bottles I have amassed over the last few months. While initially a bit perturbed by this trend that surfaced during the pandemic (it makes much more sense to me to taste a wine over the course of a meal or evening), I have almost come to the point where I am ready to embrace the idea (how is that for a string of qualifiers?). If nothing else, it enables me to taste a bunch more wines. Rationalization at its best?

This is pretty simple: if there is a wine geek in your life, and they do not already know about Master the World™ you now have the perfect gift to get them this year. A couple of months ago, I took part in seven tastings with the great people at Master the World™ and I can’t express enough how valuable the experience was. I learned so much about wine in general, the regions explored, the individual wines and wineries included.

The concept is really brilliant, in my opinion, as the fine folks at Master the World™ take wines from around the world and, after verifying that the wines are not flawed in any way, transfer the wines into smaller, 187ml bottles which they then group six bottles together under a common theme. It might be a region, a variety, a producer, you name it, Evan Goldstein (Master Sommelier) and Limeng Stroh (Co-founder and CEO) have found myriad ways to link wines to make very compelling tasting kits.

On top of all of that, the wines arrive blind–their identities are hidden so you can taste the wines without any preconceived notions or bias. “But wait, there’s more.” Master the World™ also provides both a video where industry leaders, including several Master Sommeliers, discuss the wines and an online evaluation tool that walks you through the entire process. 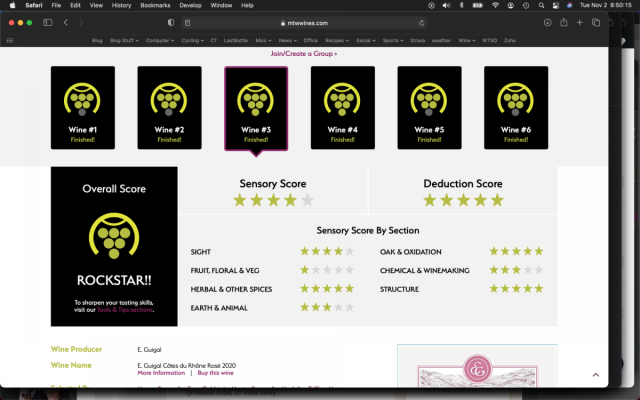 The results from one of my recent wine evaluations. Not bad, but not great, either.

It really is rather remarkable, incredibly educational, and a ton of fun (as long as you don’t mind being humbled). Individual kits cost $90 and include shipping, and the cost goes down if you agree to buy multiple kits.

This tasting kit (241C for those keeping track at home) focused on one of my favorite (and largely still under-appreciated in this country) regions: Beaujolais. This kit contained one white wine, a rosé, and four reds. In Beaujolais, it is fairly simple: white (which is exceedingly rare) means Chardonnay and rosé and red mean Gamay.

While it seems logical to most Americans to simply add the name of the variety on the label, the French don’t believe that is necessary. They believe you should just know because, well, of course they do, they’re French. 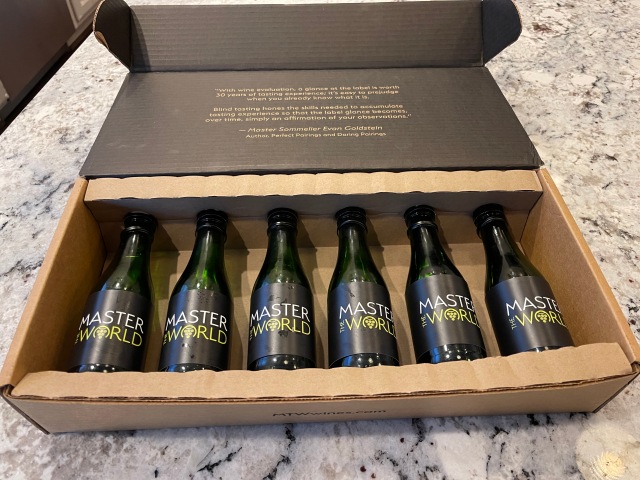 The Master the World™ wines arrive snugly tucked into their own little cardboard bed.

2020 Domaine Emmanuel Fellot Beaujolais Blanc, France: Retail $18. 100% Chardonnay. Master the World tasting Kit 241C. Beaujolais Blanc is a fairly rare breed, even in France, as it makes up only about 2% of the region’s total production. This clear, star bright, straw to yellow wine boasts plenty of fresh citrus (lemon, lime, grapefruit), with bits of green apple, pear, and even nectarine on the nose. There is also a slight vegetal aspect with leafy salad greens and a hint of olive. Yeah, a lot going on. The palate is rather lean, but there is also a roundness which I assume comes from lees contact or even bâtonnage. Still, the above-average acidity holds everything together in this delightful quaff. Very Good. 89 Points.

2020 Domaine Dupeuble Pere et Fils Beaujolais Rosé, France: Retail $18. 100% Gamay. Master the World tasting Kit 241C. Unlike Beaujolais Blanc, there is a considerable amount of Beaujolais Rosé produced (roughly 2 million bottles a year), but like the white, not much of the pink stuff makes it to the U.S. That is too bad since I think Beaujolais Rosé offers a rich, fruity alternative to the more reserved Provençal style. This star bright almost salmon-colored pink beauty boasts plenty of said fruit with strawberry, cranberry, and black cherry predominate. Throw in a little passion fruit and peach for good measure and you have a lovely fruit basket from central France. The palate is quite lean and tart with moderate alcohol and plenty of verve. Excellent. 90 Points.

2019 Fabien Collonge Chiroubles L’Aurore des Côtes, Beaujolais, France: Retail $30. 100% Gamay. Master the World tasting Kit 241C. With every Beaujolais I try, I state that I need to be drinking more of it. When will I ever begin to heed that advice? From a fifth generation winegrower, this bright ruby beauty boasts plenty of red cherry and pomegranate on the nose along with fresh rose petals and violet. The palate is equally enchanting with bursts of fruit accompanied by above average acidity to help keep it in check. The finish is lengthy and layered with subtle tannins, suggesting short-term cellaring potential. Excellent. 92 Points. 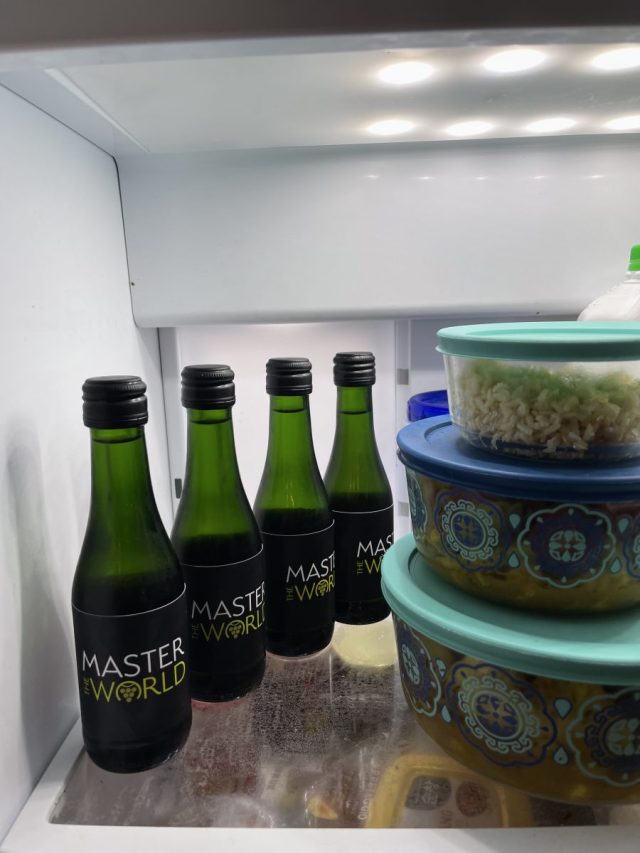 Another upside? The bottles chill down quickly and don’t take up that much room in the fridge.

2019 Michel et Sylvain Tête Juliénas Domaine du Clos du Fief Tradition, Beaujolais, France: Retail $25. 100% Gamay. Master the World tasting Kit 241C. Another lovely, bright, ruby wine from Beaujolais, this time from a third and fourth-generation winegrower as Michel Tête is now sharing the winemaking with his son, Sylvain. Sour cherry, pomegranate, and strawberry are the predominant fruit flavors and aromas with rose and violet playing starring roles as well. The palate is all about the fruit as well, but the above-average acidity gets plenty of screen time as well. Round and smooth until the finish, when some tannins peek in as more than a cameo, hinting that this film, er wine, has lasting potential. Excellent. 91 Points.

2016 Domaine Piron & Lafont / Piron-Lameloise Chénas Quartz, Beaujolais, France: Retail $22. 100% Gamay. Master the World tasting Kit 241C. Another stellar wine curated by the fine folks at Master the World. This one comes from the smallest of the Beaujolais Crus, Chénas, named for the oak trees (chènes) that once dominated the hills. Bright fresh fruit, characteristic of most Beaujolais, dominates the nose of this garnet wine, mostly sour cherry and strawberry. There is also plenty of bay and tea leaf represented as well as a touch of anise. The palate is round and smooth with a present, but not over-powering, acidity. The tannins have mostly integrated in this nearly six-year-old wine and thus is likely at or near its peak. Wonderful. Outstanding. 93 Points.

2018 Domaine de Colette Morgon Le Charme de Colette, Beaujolais, France: Retail $23. 100% Gamay. Master the World tasting Kit 241C. Morgon, the second largest of the Beaujolais Crus (Brouilly is the biggest), is known for its power, often producing the heartiest wines from the southern part of Burgundy. This bright, ruby wine certainly follows suit, with the Beaujolais characteristic sour cherry, strawberry, and pomegranate on the nose. Not quite as floral as other wines from the region I have tried, but still there are hints of violet and fuchsia. It is difficult to describe any Beaujolais as “big” but that, of course, is a relative term and when compared to its “relatives” this Morgon certainly adopts that moniker. Plenty of fruit, a bit weighty in alcohol (but nowhere near “hot”) with ample tannins and a lengthy finish. Outstanding. 93 Points.

I have been an occasional cycling tour guide in Europe for the past 20 years, visiting most of the wine regions of France. Through this "job" I developed a love for wine and the stories that often accompany the pulling of a cork. I live in Houston with my lovely wife and two wonderful sons.
View all posts by the drunken cyclist →
This entry was posted in Beaujolais, Chardonnay, Gamay, Wine. Bookmark the permalink.