NV André Chemin Champagne Premier Cru Brut Rosé, France: Retail $45. 74% Pinot Noir, 18% Chardonnay, 8% Coteaux Champenois (still) Pinot Noir. I bought six bottles of this wine from Wines Til Sold out for $28 back in August of 2021 and the first bottle was fine (88 pts). The second bottle was decidedly better (90 pts), and this latest cork revealed a wine that was even further up the scale. While it might be far too easy to affix a Goldilocks explanation here, I am indeed excited to pop the other three corks. Excellent. 91 Points.

NV Bernard Ledru Champagne Premier Cru Tradition Brut, France: NV Bernard Ledru Champagne Premier Cru Tradition Brut, France: Retail $50. 50% Pinot Noir, 50% Chardonnay. I bought six of these from LastBottleWines.com nearly seven years ago now and this is the fifth bottle that we have cracked. It has been three years, though since the last bottle and it seems as if those 36 months have aged this wine quite a bit (I am ignoring the bottle variation argument, altogether, no matter how valid it might be here). Golden in color, light in sparkle, heavy in oxidative notes, this wine clearly has crossed over the “old” threshold and is zipping down the other side. I do like older Champers, but I need to drink the last bottle soon, maybe even tonight. Very Good. 89 Points.

2017 Camlow Cellars Pinot Noir Rosé, Green Valley of Russian River Valley, CA: Retail $30(?). Under screw cap. Camlow Cellars Sus Volans Whole Cluster Rosé of Pinot Noir, Green Valley of Russian River Valley, Sonoma County. It has been a solid four-plus years since this was harvested and it is still going strong, Darker than most rosés and given the age, a bit more orange than pink with strawberry, rhubarb, a bit dirty, and plenty of mineral notes. The palate is led by the acidity, then the fruit to say the least. Yummmm. Excellent. 92 Points.

NV Gallimard Père et Fils Champagne Cuvée de Réserve Blanc de Noirs, France: Retail $50. 100% Pinot Noir. I have now had a few cuvées from this family-run house in the Aube, and I have to say I am impressed. As with the other iterations, I picked this up from LastBottleWines.com and each has shown all the characteristics one hopes to find in a champagne from the subtle citrus notes to the intense yeastiness, to the elegance and finesse. Really a fantastic wine. Glad I have 11 more. Excellent. 91 Points.

2011 Château La Nerthe Châteauneuf-du-Pape Blanc, France: Retail $65. 39% Roussanne, 38% Grenache Blanc, 15% Clairette, 8% Bourboulenc. I wish I had the money and opportunity to become the world’s foremost expert on Châteauneuf-du-Pape Blanc. It is approaching “Favorite White Wine From France” status as Burgundy has become ridiculously expensive and continues to struggle with the pre-mature oxidation issue. And La Nerthe has to be atop my list. Still incredibly youthful more than a decade past vintage, I could have easily been persuaded that this was much, much younger. Great fruit, acidity, and mouthfeel, this is both tart and velvety with harmony and length. Yowza. Not as monumental a wine as the Clos de Beauvenir, but holy cow is this a fantastic wine. Outstanding. 95 Points.

2001 Trimbach Gewurztraminer Cuvée des Seigneurs de Ribeaupierre, Alsace, France: Retail $45(?). I bought six bottles of this wine way back in August of 2012 and sadly, this was the last of the lot. And what a beauty. Golden in the glass with definitive signs of oxidation in color, on the nose, and on the palate, but not overpowering whatsoever. What is dominant? Above all the aromatics: white hibiscus, lemon blossom, lychee, golden apple, and deep, intense honey. Yowza. The palate is simply magnificent. Sure, there is the suggestion of sweetness, but the subtle fruit, that slight oxidation, and the incredible richness are the story once past the lips. New World Gewurztraminer producers take note: this is what you aspire to be. Outstanding. 95 Points.

2013 Walter Hansel Winery Chardonnay Cuvée Alyce, Russian River Valley, CA: Retail $40. I likely should have popped this cork sooner as it is pretty dark in the glass (oxidized at least a little) with a hazelnut lemon curd thing going on. The palate, however, shows only slight indications of oxidation with the citrus and nuttiness dominant. There is also an oak element present, but with most Hansels I have tried, it is subtle and well within “acceptable” norms. While this is not the “best” California Chard I have come across, it is certainly in the discussion among the “better” iterations of the variety in this country. Excellent. 92 Points. 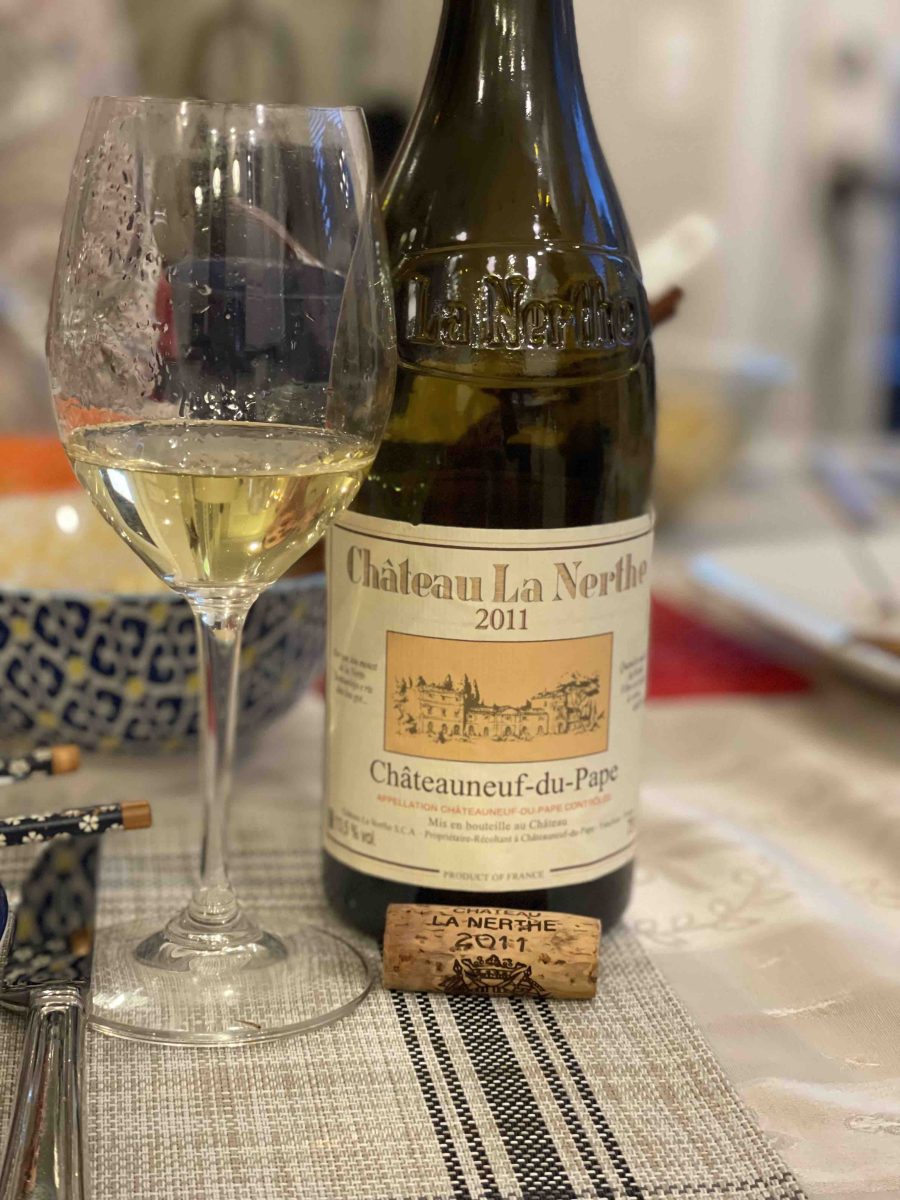 WINE OF THE WEEK: What can I say? It was another very good week when it came to pulling wines from the cellar as all of the wines were stellar. The two that stood above the rest, however, were both from France (not surprising since we drink a ton of French wine) but neither were from Champagne (which is a bit surprising since we drink a ton of champagne). The first, the 2001 Trimbach Gewurztraminer Cuvée des Seigneurs, was incredible and invoked memories of my time studying in my favorite French region to visit. The second, and this week’s Wine of the Week, the 2011 Château La Nerthe Châteauneuf-du-Pape Blanc, was given to me by a good friend a few years ago. We popped it to share with other friends in our neighborhood, thus converting them to fans of La Nerthe. Wine has a sneaky way of reaching beyond the bottle and uniting folks who can often be thousands of miles away.

I have been an occasional cycling tour guide in Europe for the past 20 years, visiting most of the wine regions of France. Through this "job" I developed a love for wine and the stories that often accompany the pulling of a cork. I live in Houston with my lovely wife and two wonderful sons.
View all posts by the drunken cyclist →
This entry was posted in Bourboulenc, Champagne, Chardonnay, Clairette, Gewurztraminer, Grenache Blanc, Pinot Meunier, Pinot Noir, Roussanne, Wine. Bookmark the permalink.