A few nights ago we had some good friends over for dinner Friday night before they took off for France until the Fall.   My older son had a 6:00 baseball game that evening, so it was going to be a bit of a late dinner.  The game went well (there was a below average amount of yelling for a Little League game) and we hustled back to cook at around 8:00. When we got back to the house, my friend had a bit of a surprise for me: 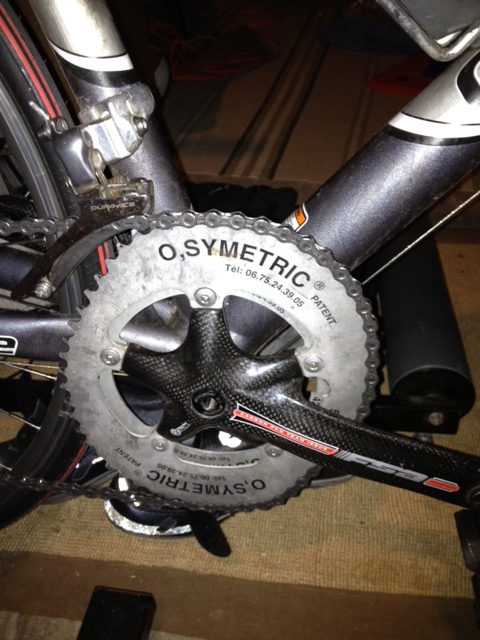 Those are new O-Symmetric chainrings for my bike.  Well, I say they are ‘new’, but he actually raced on them himself, winning a big race or two along the way.

N.V. Bouvet-Ladubay Rosé Excellence:  Retail ~$15.  I paid $10.49.  One of the darker sparkling rosés I have seen in a while.  Nice nose of strawberries and watermelon.  Equally nice on the palate with very good body that you would expect given the color.  The fruit also made it seem like there was a touch of sweetness.  Medium finish.  Very Good.  88 points.

Next, I made a classic pseudo-wine guy mistake.  I brought up several bottles of wine to have with the skirt steak and Asian salad. The mistake?  I asked how many bottles of wine we thought we would go through.  My wife (not a big drinker) and his wife (the designated driver for the trip back to the ‘burbs) both said at the most one more bottle.  And I listened to them (I always listen to my wife unless college football is on T.V.).  Of course we did not stop at one bottle (we rarely do, so I am not quite sure why I still ask), and as a result we had these two out of order (since it is always better to drink more subtle wines before bigger wines).

2001 Ridge Zinfandel Late Picked York Creek: Retail ~$30? I paid $17.  I have mentioned here several times, I think, that I am somewhat of an anomaly in that I like to have some age on my Zins.  I feel like that allows the fruit to subside a bit and allows a little more of the complexity to come through. Great theory. Well, if my theory is true this wine was initially a HUGE, overwhelming bowl of craziness because for an 11 year old wine, this had incredible fruit. I normally do not like the big fruity wines, but this one was beautifully composed (maybe the age?); there was nice balance and although integrated, still some tannin on the back end.  Wonderfully delicious, especially since I have another two bottles down in the cellar. Outstanding. 93-94 points.

2006 Novy Family Wines Syrah Parsons’ Vineyard: Retail ~$33.  I paid $23 at the winery. We are big fans of Siduri/Novy and have been to the winery numerous times.  They always seem to have some great deals going on and their wines never disappoint. This Parsons was no exception, despite following the big bruiser Ridge.  Tons of dark fruit on the nose: blackberry, blueberry, and even a little mint.  On the palate, a nicely refined wine with nice fruit upfront, great balance, and some tannin on the finish.  A great pairing with the flame treated bovine flesh. Outstanding. 92 points.

Moments after we wished them a ‘bon voyage’ both for their trip back to the ‘burbs and for their trip back to France, I raced down to the basement to start putting the chain rings onto my bike. They waere surprisingly easy to install, I must say.  My friend who gave them to me actually made his way into the city to ride with me as I tested them out for the next couple of days (including Father’s Day morning). To date,  I have only been out on these a few times, but they certainly seem to give me more power.  I will get back to you later after I have been out on them a few more times, if you are in to that kind of thing….

I have been an occasional cycling tour guide in Europe for the past 20 years, visiting most of the wine regions of France. Through this "job" I developed a love for wine and the stories that often accompany the pulling of a cork. I live in Houston with my lovely wife and two wonderful sons.
View all posts by the drunken cyclist →
This entry was posted in Cooking, Cycling, Wine and tagged Barbecue, bottle of wine, Bubbles, Loire Valley, Osymetricusa, Rosé, wine dinners, wine food pairing, wine guy. Bookmark the permalink.

1 Response to Friends, Reds, and Rings