When I started this blog way back in 2012, I had no idea that it would be even remotely popular. To be honest, I am still not sure that it is, but the scores of samples that have invaded my kitchen suggest that there are at least a few misguided souls out there that want me to taste their wines.

Up until relatively recently, those wines for the most part, were from large-scale producers with undoubtedly large-scale budgets who hoped to have many “journalists” write about their wines.

And that’s fine. While it might not be the “popular” or “hip” to profess, there are many large-scale producers making fantastic wines.

But that is not the point of this piece.

No, it seems that this little blog is starting to grab the attention of some smaller producers, too, which might be a bit counter-intuitive. Regardless, it is great to be able to try wines that take a bit of effort to find (due to their limited production) and offer a brief respite from some of the usual suspects, so to speak.

This past spring, my friends in brown delivered quite a few bottles of premium Pinot Noir. While I am certainly no Rusty Gaffney (the Prince of Pinot), I am fairly familiar with the domestic Pinot Noir scene, having visited many of the top producers in the U.S. Thus, it was a delight to be able to sample through these wines, what I call “Primo Pinot” over the last few weeks.

2014 Emeritus Vineyards Pinot Noir Sonoma Coast: Retail $55. Translucent in the glass with eucalyptus and Bing cherry cola dominate the nose, while the palate is earthy, fruity, and tart. Brambly, succulent, and fantastic. This is only my second go-around with Brice’s Emeritus venture, but it will certainly not be the last. In a sea of over-extracted, over-blown, over-priced Pinots on the market today, Brice continually shows that Pinot is at its best when all is in balance. Bravo. Outstanding. 91-93 Points.

2014 Emeritus Vineyards Pinot Noir Russian River Valley: Retail $42. Darker and slightly more brooding than the Sonoma Coast, both in color and aromas: mostly black cherry, cassis, mocha dominate here with a touch of vanilla and spice. Heavier on the palate as well, with luscious fruit that envelops the mouth. While the Sonoma Coast might be described as delicate and contemplative, this is robust and muscular. Don’t get me wrong—this is not one of those over-extracted beasts mentioned above, but if you do lean more toward more assertive Pinot, this is it. Outstanding. 92-94 Points.

I believe I first met Ed Thralls at the 2012 Wine Bloggers Conference and we have run into each other a few times since. For many a wine blogger, Ed is a bit of a role model or even a hero—a highly respected wine blogger, he left his “real job” (a tech career in Atlanta) in 2010 and moved to California to pursue his passion and has never looked back (as far as I know). 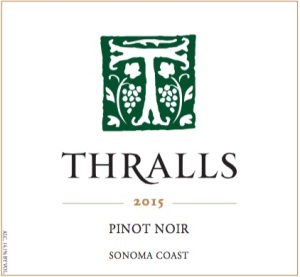 2015 Thralls Pinot Noir Sonoma Coast: Retail $40. At the time I first met Ed, I was very much a newbie and he seemed to be well-entrenched with the “in-crowd” of more seasoned bloggers (I doubt he remembers that first encounter, but…). Shortly thereafter, he launched his own brand, producing only Pinot Noir from the best appellations in Sonoma County. Classic black cherry fruit with a hint of eucalyptus, the palate comes off as a bit sweet initially with waves of luscious fruit–this is a big-boy Pinot. The mid palate is characterized by a bit of anise and earth and the finish is tart and lengthy. This is the first of Ed’s wines I have tried and I certainly hope it is not the last. Outstanding. 90-92 Points.

My first encounter with James and Kerry MacPhail, in the Spring of 2016 (Finally Visiting an Icon: MacPhail Family Wines), was rather innocuous, but memorable—I had long wanted to meet one of the new wave of iconic Pinot producers, but for whatever reason, it just never happened. Evidently, that meeting also made an impression with them, since they have since sent me a few samples to try. One lesson I have learned: get my reviews up as quickly as possible since these limited production wines sell out very quickly.

2015 Tongue Dancer Pinot Noir Sonoma Coast: Retail $49. I met James McPhail a little more than a year ago now, right before he left his eponymous label, McPhail Family Wines. He left for a variety of reasons, one of which was to focus on this new(ish) venture, Tongue Dancer. No one would ever accuse James of being a chatterbox, just as no one would claim that he isn’t one of the most talented winemakers in California. His Pinot Noirs (and Chardonnays) are simply some of the best I have tasted, so when this landed on my doorstep, I have to admit I was a bit giddy. I have met James a few times now, and while our conversations are, well, limited, there is no shortage of verbiage when his lovely wife Kerry enters the room. While she is no doubt a stellar ambassador for both James and the wines, the back label has the best description of her: “Knowledgeable one.” The wine? Rich and full right from the jump with black cherry and pepper, vanilla and earth. But the nose only discloses a smidgen of what occurs on the palate: waves of fruit and complexity with heft and power initially that succumbs to finesse and elegance. If you have never had great Pinot before, you should not start here as it just might ruin you for all that follows. Whoa. Outstanding. 94-96 Points.

Last, I have written about Brooks Wines a couple of times now (Catching Up with Brooks Wines, and The Glass of Wine I just Could Not Drink), and they more than merit inclusion here.

2014 Brooks Pinot Noir Temperance Hill Eola-Amity Hills Willamette Valley: Retail $48. I first visited Brooks after the Wine Bloggers Conference in Portland in 2012. I have since visited the winery a couple of times and learned that Brooks is much more than great Pinot. But let’s be clear: Pinot put Brooks on the map and it remains its calling card. This wine started off a bit tight, with some cherry, spice, and earth. Nice fruit on the palate, but not overplayed, paired with some earth and pomegranate. This is why I love Oregon Pinot: great fruit and balance. Lovely. Outstanding. 91-93 Points.

2014 Brooks Rastaban Pinot Noir Eola-Amity Hills Willamette Valley: Retail $60. This is the Brooks Estate Vineyard, it was Jimi’s favorite site, and is some of the oldest own-rooted, biodynamically farmed Pinot in the state. It was also the source of The glass of wine I just could not drink. Dark cherry, eucalyptus, menthol, and a bit of flinty goodness. Great fruit, and depth–this wine is pretty darned close to a “Whoa.” Pretty darned close. This is a classic Willamette Pinot. Fantastic. Outstanding. 92-94 Points.

I have been an occasional cycling tour guide in Europe for the past 20 years, visiting most of the wine regions of France. Through this "job" I developed a love for wine and the stories that often accompany the pulling of a cork. I live in Houston with my lovely wife and two wonderful sons.
View all posts by the drunken cyclist →
This entry was posted in Pinot Noir, Wine. Bookmark the permalink.