Beaulieu Vineyard lies at the root of my wine appreciation even though I have never stepped foot in the Rutherford winery. Several years ago, after I had been collecting wine for a while but I was just beginning to explore California wines, I got an email.

While there is nothing inherently noteworthy about an individual example of modern communication, this particular note caused for a rather rapid response. Gary (not his real name), a man from whom I had purchased a few wines previously was getting divorced and needed to sell all his remaining bottles and wanted to know if I might be interested.

He had been selling off his once 3,000+ bottle collection for several years, ever since he had been diagnosed with an illness that precluded alcohol consumption. It took him a while to accept his new-found fate: he told me that he could not even open the door to his custom cellar—it remained closed for over six years.

He had long since sold the big trophies in his collection: the Bordeaux First Growths, Napa Cult Cabs, and many noble Brunellos and Barolos. There were still about 150 bottles left, though, apparently a hodgepodge of wines he had purchased, some he had received as gifts, and a bunch he was not exactly sure how he had acquired.

He provided me a partial list of the bottles that remained—about half of the purported 150. There were some interesting wines, certainly, but buying six “mystery cases” was bold, even for me. I decided to jump in but convinced a friend to go in on the deal with me to hopefully soften the financial blow if it turned ugly. I had negotiated a price for the entire lot—and while we were not entirely sure what we were getting for our $1500, I knew that the wine had been well stored and, well, that’s all I really knew.

It turned out that there were actually 288 bottles in all (that comes out to about $5.21/bottle for the math curious) and while there were certainly a few stinkers (the 10-year-old Jacob’s Creek Shiraz was a bit challenging), there were also some gems (a 1966 Brane-Cantenac comes to mind).

There was also a nearly complete 20-year vertical of Beaulieu Vineyard Rutherford Cabernet Sauvignon, from 1983 until 2003 (with several bottles of each vintage), the year when he received his unfortunate diagnosis. It seems as though he had been a BV wine club member for over 30 years and he bought at least a case of the winery’s workhorse wine every vintage. Perhaps most astonishing, like me, he had not once stepped foot in the winery but he became a fan of the wine at an early age and remained loyal to the end.

I was a bit floored by the story and immediately felt as though I was taking advantage of his misfortune. Perhaps sensing my unease, he intimated that he and his teetotaling and soon-to-be-ex-wife had no children and he was just happy that his wines would be consumed by someone who might appreciate them.

Over the course of the next couple of years, my wife and I consumed a lot of the older BV cabs, which comprised roughly half of the 144 bottles I received from the deal. We had mini-vertical parties, blind tastings, and played the game “guess the vintage” with nearly every bottle. We had a great time drinking those BV cabs while learning a ton about California Cabernet (and even reliving some of our own histories from the vintage du jour). Concerned about his health (and appreciative of enjoying his bounty) we made sure to toast Gary with the first glass of every bottle.

This past spring I received another email—an invitation to meet BV’s winemaker Jeffrey Stambor to taste Beaulieu Vineyard’s Rarity, which has only been produced five times in the 117-year history of the winery and sells for $1,000 a bottle. (Since that original email, the price has increased to $1,250.)

Georges de Latour emigrated to California from Bordeaux in 1883 but he did not immediately start making wine—he actually traveled his new state harvesting tartaric acid to make cream of tartar (a byproduct of grape fermentation with many uses, including making my grandmother’s famous snickerdoodle cookies). Visiting many vineyards, he was able to ascertain that the beautiful place (beau lieu in French) in Napa near Rutherford would be a perfect spot to start his own vineyard to harness the enormous potential of the valley as a wine-producing region. He bought four acres there in 1900 and another 127 acres a few years later.

Essentially from the beginning, De Latour had always made sacramental wines, so when Prohibition was instituted at the end of 1917, BV survived by producing sacramental wine for most of the United States. After Prohibition ended in 1933, de Latour returned to making quality table wine. With the 1936 vintage, de Latour realized that his vineyard was capable of creating truly remarkable wines, but he needed someone with a scientific background to realize the finest expression of his Rutherford fruit, so he returned to France and convinced a talented scientist at the Pasteur Institute in Paris to come to California.

Almost as soon as André Tchelistcheff arrived at BV in 1938 he became known as a leader in research, innovation, and continually improving winemaking techniques, having an immeasurable impact on the California wine industry.

Tasting that 1936 wine (which de Latour called his “Private Reserve”), which was still in barrel when he arrived, Tcheslistcheff insisted that the wine be bottled and become the winery’s flagship wine. Sadly, de Latour died in 1940, prior to the wine’s release, which the family then decided to rename as “Georges de Latour Private Reserve” which has now been made for 77 consecutive years.

Tcheslistcheff retired from BV in 1971 and served as a consultant on the West Coast for the next twenty years, mentoring many of today’s more prominent winemakers (Joe Heitz, Mike Grgich, Rob Davis, and Jill Davis are just a few). He returned to BV in 1991 and died just a few years later, but that was enough time to mentor yet another winemaker, Jeffrey Stambor, who had just started as an assistant winemaker at BV a couple of years prior.

Jeffrey says that André still influences him today, more than twenty years after his death, with the biggest lesson he learned: that you must always be willing to change. According to Jeffrey, Tcheslitcheff’s biggest disappointment when he returned to BV after having been away for twenty years was when he found they were “still doing the same things as when he left.”

While Tcheslitceff always said to Stambor that “It’s not about the winemaker, it’s always about the wine” Jeffrey bristles at the notion that “wine is made in the vineyard. Of course, it’s important, but while wines are ‘born’ in the vineyard–a lot of raising still goes on in the winery.”

Turning to the wines, we started the tasting—with an older vintage of the legendary Napa wine.

In the mid-1970s, BV, following the Tchestilcheff model of always researching and innovating, undertook a study of the different clones of Cabernet. No one else in California had really looked into it at the time, but when a new type of phylloxera invaded California in the 1980s, they understood what clones and rootstocks would resist the louse. In all, BV planted 14 different clones from around the world in a random array to eliminate differences in soil and these experimental plantings are still used to advise other growers as well as their own vineyards.

BV also makes and bottles wines from these vineyards, often keeping the clones separate to identify their differences. 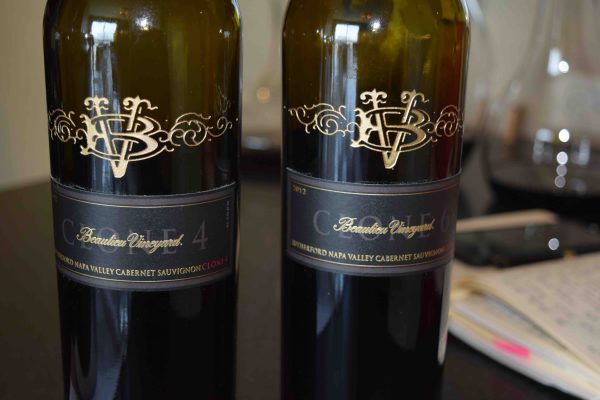 2012 Beaulieu Vineyard Cabernet Sauvignon Clone 6: Wine Club $165. Found in an abandoned vineyard in the Sierra Foothills outside the town of Jackson. Smaller clusters and yield but the flavors and complexity made it economically viable. Jeffrey likened this clone to enabling BV to “have mountain fruit on the Valley floor.” Spicier, more intense fruit. Outstanding. 92-94 Points.

In 2008, BV converted an existing structure (an old barrel room) into a winery exclusively for the production of  Georges de Latour Private Reserve. Jeffrey called it more “intentful” winemaking; the fermenters were made specifically for the size of each block, all fruit was sorted by hand until 2014 when they switched to optical sorting, and no wine ever sees a pump.

2013 Beaulieu Vineyard Georges de Latour Private Reserve: Retail $145. A unique vintage as the wine was produced under drought conditions. Early growing season since dry soils warm up faster, leading to the earliest harvest Jeffrey had ever seen. Viscous and rich dark berry in the glass. Tannic but not huge. Rich. Outstanding Plus. 93-95 Points.

The last wine we tasted was the Rarity. As I mentioned above, it has only been made four times over the course of the 117-year history.

2013 Beaulieu Vineyard Rarity: Retail $1250/magnum. From the same challenging vintage as the Georges de Latour. Jeffrey had started making some sub-blends while the wines were still aging, and “some of them would be just fabulous.” He knew that he was sitting on some incredible potential, but he was hesitant to make a wine above the Georges de Latour, however, since the wine is so revered both in and outside of the winery. He had made some better wines (i.e., more expensive than the flagship) at BV but they were never Cabernet-based. In the end, he just felt that the wine demanded it, so he chose the best 12 barrels and bottled 250 cases of magnum only. Whoa. Waves of rich fruit battle with powerful tannins and vibrant acidity. My first thought was “This is going to need a ton of time” which is true. But whoa. Once I put that out of my head and stopped over-analyzing, I realized that this is likely the best Cabernet I have ever tried. Whoa. Outstanding Plus Plus. 98-100 Points.

Leaving the tasting, savoring the finish of the Rarity, which would stay with me for hours, I paused at the window to take in the skyline of my new home of Houston. My thoughts drifted to Gary—I had heard a few years ago that he passed away, but I knew that he would have been happy to hear about the tasting I had just experienced. I also knew that I need to visit Beaulieu Vineyards—for both of us.

I have been an occasional cycling tour guide in Europe for the past 20 years, visiting most of the wine regions of France. Through this "job" I developed a love for wine and the stories that often accompany the pulling of a cork. I live in Houston with my lovely wife and two wonderful sons.
View all posts by the drunken cyclist →
This entry was posted in Cabernet Sauvignon. Bookmark the permalink.

6 Responses to A Rarity Indeed