2015 Commanderie de la Bargemone Coteaux d’Aix-en-Provence Rosé: Retail $15. 30% Syrah, 30% Grenache, 25% Cabernet Sauvignon, 15% Cinsault. I brought this back from Provence a couple of years ago and I have been holding on it to see how True Rosés age. As expected, this is fabulous. Pale orange in the glass with melon, white flower, and strawberry. Great fruit still, a few years out with laser-like acidity and a lengthy finish. Even as I doused my beef tacos with the spicy green tomalito sauce, this wine held up and then some. Nice. Outstanding. 90-92 Points.

2002 Domaine Alain Burguet Gevrey-Chambertin Mes Favorites Vieilles Vignes: Retail $120. 100% Pinot Noir. A slight departure from the last two bottles of this that we tried as this was a bit funky on the nose. Still, there is slightly stewed blackberry fruit and earth that come through that funkiness announcing its Gevrey bone fides. On the palate still rich fruit that is tampered by a nice earthiness with plenty of the characteristic Burgundian acidity leading to a lengthy finish. Just a hint of tannin on the back-end, so might do well for another couple of years at least. Outstanding. 90-92 Points.

2006 Campion Pinot Noir Carneros: Retail $35. I just recently learned that my wife does not particularly care for older wine. Huh? I have been buying wine with her since we started as a “couple” nearly two decades ago and cellaring much of it. Now that we are starting to “harvest” many of the bottles, she tells me she does not like “old wine”? That is unfortunate, to say the least. I am going to have to work on her a bit. As for this Pinot, it is holding up fairly well after a dozen years in the bottle with dark berry fruit and nice earthy notes. On the palate great acidity, subtle fruit and just a hint of tannins. Nice. Very Good to Outstanding. 88-90 Points.

NV G. H. Mumm & Cie Champagne Cordon Rouge Brut: Retail $45. 45% Pinot Noir, 30% Chardonnay, 25% Pinot Meunier. I am fairly confident in stating that there are not many on this planet that would tout this wine as the world’s best NV Brut champagne, but this scratches the itch when the in-laws come over for dinner at the last minute (they are big bubble lovers, the in-laws). A bit of citrus and a touch of toast, this is what one might expect from a large producer. Clean, honest, pleasant. Very Good to Outstanding. 88-90 Points.

NV Mumm Napa Brut Rosé: Retail $18. 80% Pinot Noir, 20% Chardonnay. This winery, started by (but no longer associated with) the Champagne titan mentioned above, has been a go-to wine for as long as I can remember (in fact it is one of the few wineries where I was actually a club member). This usually costs around $15-18 and when I saw this for about $11, it was a no brainer. A brilliant pink with a persistent sparkle, juicy red fruit, and a delicious tartness. For ten bucks and change? No-brainer. Very Good. 87-89 Points. 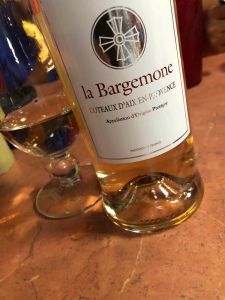 WINE OF THE WEEK: This week was a fairly typical one at the Drunken Cyclist homestead when it comes to wine consumption. As is fairly normal, we pulled a couple of Pinots, a couple of sparklers, and a rosé from our personal collection. This lineup could have come from pretty much any week of the year, which I mention since it is pertinent to this week’s Wine of the Week. The now distant cousins, I guess, that are the two sparkling wines with “Mumm” in the name were both very good, and what I have come to expect from both producers. The two Pinots were also what I expected, but I have to admit that I was slightly dismayed by the Burguet Gevrey-Chambertain as the previous two iterations we tried were markedly better. We have three bottles to go and hopefully they follow more closely to the first two. As for the WotW, not only was the 2015 Commanderie de la Bargemone Coteaux d’Aix-en-Provence Rosé a fantastic wine with a wonderful price, it was also proof of what I have long suspected: well-made True Rosés need not be consumed on release. Quality rosé can also be consumed year-round, no matter where one lives.

I have been an occasional cycling tour guide in Europe for the past 20 years, visiting most of the wine regions of France. Through this "job" I developed a love for wine and the stories that often accompany the pulling of a cork. I live in Houston with my lovely wife and two wonderful sons.
View all posts by the drunken cyclist →
This entry was posted in Cabernet Sauvignon, Champagne, Chardonnay, Cinsault/Cinsaut, Grenache, Pinot Meunier, Pinot Noir, Sparkling Wine, Syrah. Bookmark the permalink.