When the boys and I loaded up the Prius and headed south to Houston, we left a host of friends that we had built up over the last 16 years and the only home that the boys had ever known. There were several tears shed as we made our way down I-95 with a certain song blaring on the bluetooth:

We were relocating where we only knew a couple of people, to a culture that was far from our East Coast Liberal perspective, and a climate that was as hostile as it was foreign.

So yeah, I was psyched.

Shortly after we moved into our new house, though, we met the young family just two doors down. When I say “young” I really mean “about half our age.”  They had three adorable boys all under the age of five, and he worked in the oil industry. He was from Africa, she from Europe, and they both could easily be models for any agency that wanted to appeal to millennials.

So yeah, we had nothing in common.

Soon after we met, though, we learned that they enjoyed wine and that was all we needed. Over the course of the following year, I doubt a week went by that we did not have dinner together at least once and share a couple of bottles.

Despite their funny accents, we discovered that we indeed had much in common: a similar world view, an affinity for the French language, and a love of late ‘70s, early ‘80s R&B influenced music (if there is such a genre).

So maybe something in common.

Earlier this year, we all received the sad news that they would need to move to North Dakota, of all places, in order to stay with the company that was sponsoring (but also possibly delaying) his acquisition of a green card.

Since the likelihood of a visit to North Dakota was slim (OK, I love them like family, but North Dakota? Um, no.), we decided to have one more blowout dinner before they moved off to northern climes.

Luckily, I had recently received a beautiful care package from another friend who works at Sterling Caviar just outside Sacramento, California. While I have had caviar before, I really did not know much about the production of the delicacy and even less about the different levels of caviar available.

I received three different tins of caviar all of which came from white sturgeon:

Sterling Royal Caviar: Retail $75/50 grams. Blackish brown with just a slight fishy note on the nose but only slight. Salty, creamy, nutty, and only mildly fishy with intense taste and a lingering finish. Wowza. Outstanding. 92-94 Points. 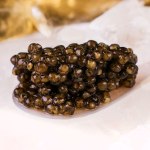 Sterling Supreme Caviar: Retail $90/50 grams. Larger and slightly lighter (more of a dark olive color). More intense aromas than the Royal but also more subtle if that is possible. Quite a bit “fishier” but also more refined. A definite difference between the two and to the better. This seems to be full of contrasts that work wonderfully together. Outstanding. 93-95 Points.

Sterling Imperial Caviar: Retail $115/50 grams. Whoa. The top of the line at Sterling, this is the lightest in color of the three which also has the intensity of the second with the mildness of the first. This is simply incredible—almost buttery with a distinct roasted nuttiness. The finish is minutes long and luscious. Whoa squared. Or cubed. Outstanding Plus. 96-98 Points.

For me (and many others), vintage champagne is the classic pairing for caviar, so I pulled out a few older bottles that I had been saving for such an occasion:

1996 Duval-Leroy Champagne Brut Millésimé: Retail $120. 82% Chardonnay, 18% Pinot Noir. I normally shy away from Chardonnay dominated champagnes as they do not seem to have the backbone and heft that comes with additional Pinot Noir. Except. As quality Chardonnay driven champagnes age, they take on much more heft and power. Such is the case here. I last tasted this wine in 2010 and that bottle hinted at its promise. Now, with another eight years in the bottle? Whoa. Slight lemon but plenty of bakery goodness—not as the bread is baking, but about thirty minutes after the ovens have been shut down. Still active in the air, but the cooler atmosphere focuses on the more subtle aspects. Whoa. Rich, deep, full. Holy cow. Outstanding Plus. 94-96 Points.

1990 Moët & Chandon Champagne Cuvée Dom Pérignon: Retail $200.  42% Pinot Noir, 58% Chardonnay. Dark in the glass with subtle bubbles and brioche a go-go. Whoa. This is a wine that is so subtle, so elegant, that it defies a contemporary description. A slight citrus begs to be noticed but it knows it is but a bit player in this drama. Caramel just on the verge of being burnt, teetering on the ledge. Whoa. On the palate holy cow this is good. If there were not bubbles, one could argue that this dry wine was a dessert offering based on the richness and depth. Whoa. Wine writers talk about “finish” frequently, but here the more apt term might be “essence” as this wine remains long after she has left the palate, long after her perfume has dissipated. But it is more than a memory, more than a feeling. This is a life event that will affect your life for days, weeks, perhaps years. Outstanding Plus. 97-99 Points.

At the end of the night, we bid them au revoir, and they vowed to be back to visit soon. They held true to their word, and will be staying with us for a week or so at the end of May, when I am sure we will share a few more bottles. And who knows? Maybe we will even watch Rocky.

I have been an occasional cycling tour guide in Europe for the past 20 years, visiting most of the wine regions of France. Through this "job" I developed a love for wine and the stories that often accompany the pulling of a cork. I live in Houston with my lovely wife and two wonderful sons.
View all posts by the drunken cyclist →
This entry was posted in Caviar, Champagne, Chardonnay, Pinot Noir, Wine. Bookmark the permalink.