Messing Around the Veneto with Masottina

Since starting this blog almost exactly seven years ago, I have made several trips to Italy and each time I had visited a particular region: Chianti, Trentino, Sicily, etc. This past year, though, on one of my trips to “the Boot” I hit three distinct regions over the course of a week.

The first stop was Sicily and Donnafugata, one of the region’s leading producers. It included a tour of another island, Pantelleria, which is one of the more amazing places I have ever been.

After 48 hours in Sicily, my time there had expired, and I boarded a Ryan Air plane for Verona, as I was off to the Conegliano-Valdobbiadene region to meet with one of the top producers of Prosecco, Masottina.

Before I get there, I need to say a word about Ryan Air: insane. I certainly understand the appeal of using the discount airline as the current airfare on Alitalia (the very much troubled national Italian airline) from Palermo to Verona is $202, including a stop in Rome. Ryan Air offers a non-stop for $42.

It’s a good thing the flight is relatively short. There is no leg room, the seats don’t recline, everything costs extra, and for what seems like the entire flight, the flight attendants are trying to sell something: food, booze, lottery tickets. It seemed a bit ambitious to be selling lottery tickets on the flight since I figured it was probably 50/50 that we would even land successfully. And that was really the only “lottery” that I wanted to “win.”

Once on the ground and shortly after my knuckles regained their color, I was whisked off for the two-hour drive to Masottina, in the heart of the Prosecco DOCG.

Over the past couple of decades, the consumption of Prosecco has exploded, leading to the questionable (at least in my opinion) expansion of the region, which has led to the production of some rather bleak wines. A positive outcome, however, to this rapid increase in demand for Prosecco was the creation in 2009 of the Prosecco DOCG (Denominazione di Origine Controllata e Garantita–Denomination of Controlled and Guaranteed Origin), the highest designation of quality for Italian wines. Until that point, all Proseccos (or Prosecci) only achieved DOC status.

As I outlined in a previous post, the wines produced in the Prosecco DOCG are rarer (the DOCG is a third the size of the DOC with much lower yields) and generally far better than those from the Prosecco DOC.

The Masottina story starts with, Epifanio Dal Bianco, who, after the end of the Second World War, realized that his family’s small vineyard in Conegliano had tremendous potential, but in order to reach it, he needed to buy more land. He started with 4 hectares (9 acres) and gradually purchased land over the next several decades. Today, the family manages 150 hectares (345 acres) of vineyards in Conegliano, of which they own 100 (230 acres), which render one million bottles (85,000 cases), of which 95% is Prosecco (the rest are still wines, which the production of which they plan to gradually increase).

Epifanio’s vision was prophetic: today, land in the Prosecco DOCG rarely goes up for sale—the last time was over two years ago. When that sale occurred, the land sold for over 700,000 Euros (about $850,000) a hectare (2.3 acres). Just a few years before that, a hectare was selling for less than half of that (300,000€).

After a brief tour of the winery, we sat down for a brief, but informative tasting of four different Masottina Prosecci. 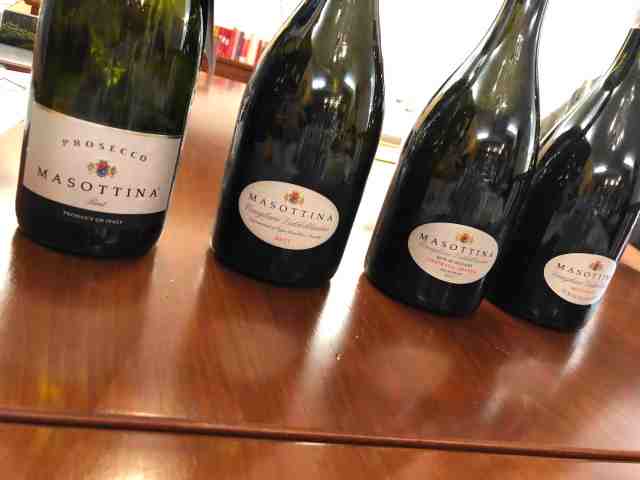 Masottina Prosecco Brut DOC Treviso NV: Retail $15. 100% Glera. Even though it is all from the same year, Masottina elects to call it a non-vintage since there might be a time when they need to blend some different vintages. Fruity with yellow apple, some tropical notes, and white flower. Tart and refreshing. Good sparkle. Medium acidity. Brief finish. Has less than 10% of DOCG second press wine. Meant to be consumed within 1-2 years as it will lose its freshness. Very Good. 87-89 Points.

2017 Masottina Prosecco Superiore Conegliano Valdobiaddene Rive di Ogliano Contrada Granda Brut DOCG: Retail $35. 100% Glera. Only from a small parcel of less than two hectares within the DOCG, with even stricter rules: lower yields (fewer grapes are allowed to grow per plant which helps to further concentrate the flavors) and one must produce vintage wines. Intense green apple from smaller bubbles. Less than ten year old vines. 12k bottles. On the palate I barely notice the sparkle as the fruit is really the star along with a decided salinity. Outstanding. 92-94 Points.

2017 Masottina Prosecco Superiore Conegliano Valdobiaddene Le Rive di Ogliano Extra Dry: Retail $35. Somewhat counter-intuitively, an “Extra Dry” has more residual sugar than a “Brut” (which means “dry”). But as Adriano Dal Pietro (Epifanio’s first son) told me: “When you make a Prosecco that is not balanced you taste the sweetness, but given the balance of this wine, you would never suspect it has more sugar.” Even more intense green apple with white peach and pineapple. 16 g of sugar (about double of what is in a Brut) but it does not come off that way; Adriano was right, it seems much drier with a very lengthy finish. Awarded best Prosecco in the world twice by Decanter. I can see why. Outstanding. 93-95 Points.

Even though our tasting was over, our time in the Veneto was not. First, we headed to lunch at the castle of Conegliano.

Not a bad lunch spot.

I was very impressed with the Masottina Proscci, but they tasted even better overlooking the valley below the castle.

We also toured the hilly area that comprises the DOCG. 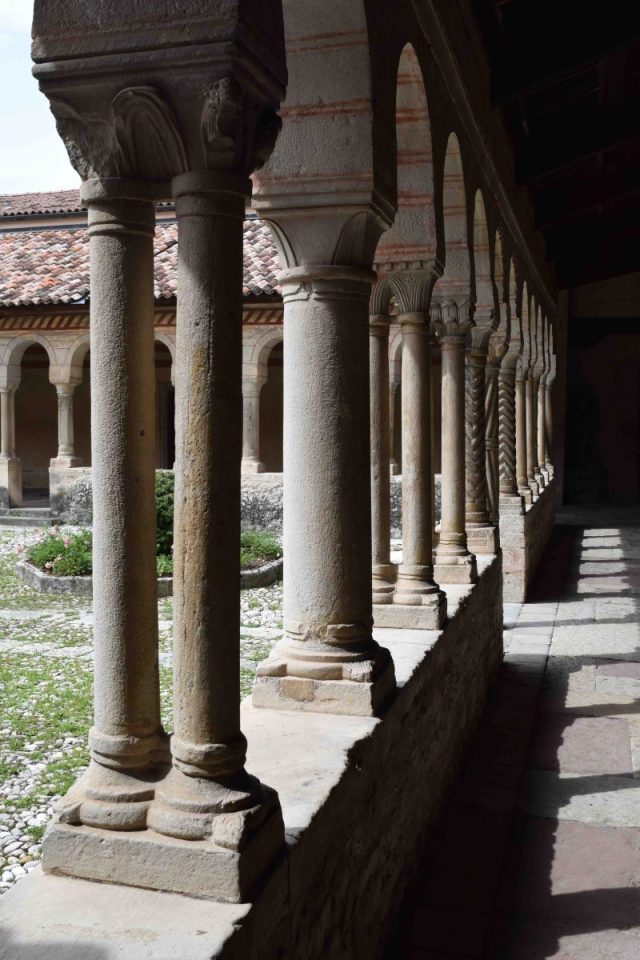 …and the Molinetto della Croda. 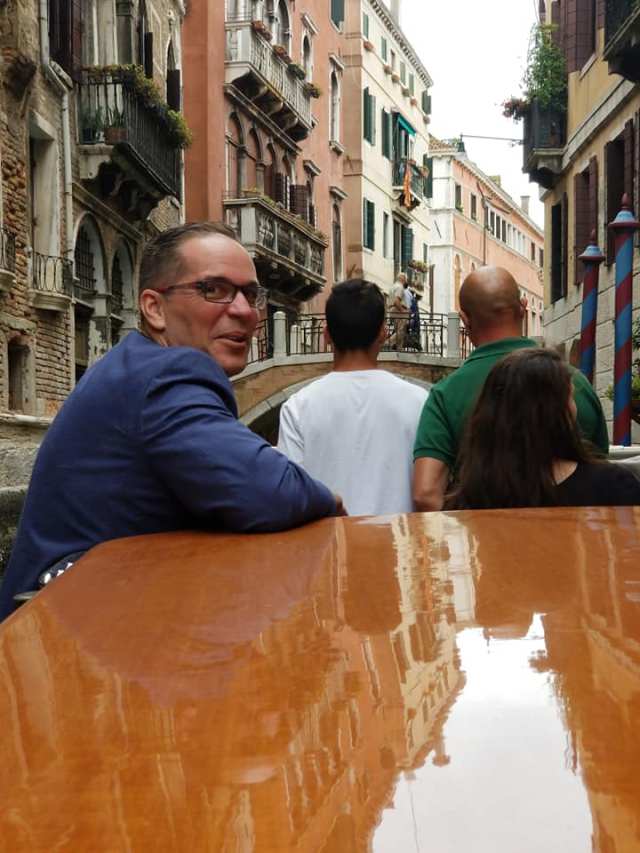 But the highlight of the trip had to be the speedboat that we took into Venice for dinner (photo Penny Weiss).

And the only thing better than taking the boat into Venice, was taking the same boat out…at night.

That was the end of my brief stay in the Veneto—the next day I was headed south, to the “heel” of the “boot” and Puglia.

I have been an occasional cycling tour guide in Europe for the past 20 years, visiting most of the wine regions of France. Through this "job" I developed a love for wine and the stories that often accompany the pulling of a cork. I live in Houston with my lovely wife and two wonderful sons.
View all posts by the drunken cyclist →
This entry was posted in Italian Wine, Prosecco, Wine. Bookmark the permalink.

2 Responses to Messing Around the Veneto with Masottina