2007 Amelle Pinot Noir Sonoma Coast: Retail $45. We were having Musgo for dinner (essentially, leftovers, as in all “Must go”) and I opted for the salmon from three nights prior. Obviously (at least to me) I wanted Pinot. Instead of searching through a mountain of samples, I turned to Cellar Tracker for bottle in the cellar. I came across this wine which is near and dear to my taste buds for at least a couple of reasons. CT said there were two, in adjacent racks. Well, I only found one, the other perhaps consumed during a night of whimsy (or more likely stupor). Thus, this is the last bottle of this wine in my possession. Giddy-up. Dark, fruity, and earthy in the glass, with plenty of fruit, tartness, and depth on the palate. This is certainly a California Pinot in style, but it has hints of its Old World French origins in approach: earthy, balanced, structured. Sad to see you go. Excellent. 90-92 Points.

NV Paul Berthelot Champagne Premier Cru Eminence, France: Retail $50. 70% Pinot, 30% Chardonnay. I bought ten bottles of this wine from Last Bottle. The first bottle was corked and the second was just so-so and I was worried. Really worried. Eight bottles to go with a so-so wine? Ruh roh. The next six bottles? Excellent, close to Outstanding even. I’ve noted all of the flavors and aromas in the previous notes, so I won’t bore you with more of that here. What I will say is that I just bought another eight bottles from Last Bottle. I wish I had bought a full case. Excellent to Outstanding. 91-93 Points.

2014 Château d’Esclans Côtes de Provence Déesse, France: Retail $35. 100% Rolle (Vermentino). I visited Château d’Esclans (makers of the insanely popular Whispering Angel) back in 2016 and tried this white and fell hard for it. White wines are rare in Provence (about 5% of production) and *rarely* make it to retail stores in the U.S. Even several years out, this is fantastic. Still quite light in color, but fragrant with tropical notes (pineapple) and tons of minerality. The palate is simply delightful: good to great fruit, vibrant tartness, lingering finish. Man, I wish Provence made more white. Excellent. 91-93 Points.

2007 Paul Goerg Champagne Premier Cru Brut, France: Retail $79. 100% Chardonnay. Located in Vertus, this cooperative produces almost exclusively Blanc de Blancs wines from only the first pressing (la cuvée) of grand and premier cru grapes. And it shows. While young BdB is certainly not my preferred style of Champagne, once they acquire some age, the wines evolve into perhaps the *best* of all styles. After 2003 (and the rarely even mentioned 2001), 2007 was perhaps the next most difficult year in a decade that produced several outstanding vintages. Golden in the glass with bright citrus, toasted almonds, and a touch of sea salt. The palate is bright and focused with candied lemon rind, fresh-baked croissant, a delicate sparkle, and a lengthy finish. This is wonderful now, but I am going to try to remember to hold onto the other bottles for a while longer–this is headed in the right direction. Excellent. 91-93 Points.

2011 Maria & Manfred Hick Chardonnay Smaragd Ried Mitterbierg, Wachau Valley, Austria: Retail 12€. Under screwcap. We had just cracked the 2012 Hick Grüner Veltliner Smaragd and wanting more Austrian goodness, I grabbed this Chard. There is not a ton of Chardonnay made in the Wachau, in fact there is very little made, and that is a shame since they are fantastic. As is this wine that I purchased at the winery in 2014. Medium-straw color in the glass with aromas of lemon curd, freshly cut grass, and a bit of spice. The palate is tart, but also round and full with rich flavors of lemon, hazelnut, and vanilla. Deliciously lengthy finish. Excellent to Outstanding. 92-94 Points.

NV Mumm Napa Brut Rosé, Napa Valley, CA: Retail $24. 80% Pinot Noir, 20% Chardonnay. I have mentioned several times that Mumm Napa (then called “Mumm Cuvée Napa”) was one of the first wine clubs that I ever joined. The winery has changed ownership several times since then, but this rosé remains one of the better deals on the market. While suggested retail is north of twenty bucks, I can usually find it for under $15 here in Houston. Good pink color with a bit of orange. A bit closed on the nose, but fruity on the palate and a tad sweet. Very Good. 87-89 Points. 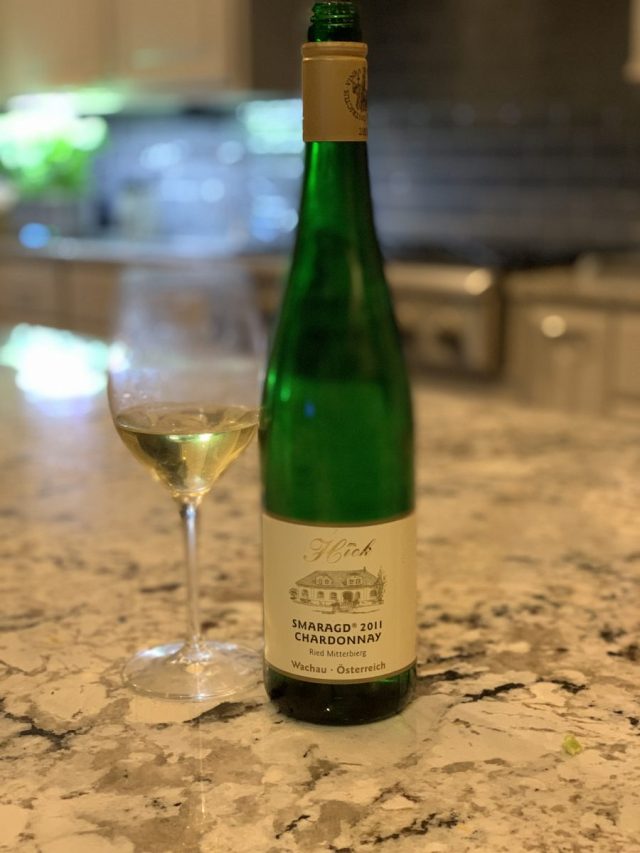 WINE OF THE WEEK: There were three real contenders for Wine of the Week this go around, all of which based on the story behind the bottle’s acquisition, which, as I have said before, can contribute as much to the enjoyment of a wine as the actual contents of the bottle. The first was the 2007 Amelle Pinot, which we purchased from a talented winemaker and friend. The other two I picked up on my travels to Europe. I love well-made whites from Provence and the 2014 Châteua d’Esclans Déesse was certainly that. The Wine of the Week, though, was 2011 Maria & Manfred Hick Chardonnay Smaragd Ried Mitterbierg, a wine that my wife and I purchased on a drive through the Wachau. Chardonnay from that valley can be ethereal but its production is nonetheless decreasing, which is a shame.

I have been an occasional cycling tour guide in Europe for the past 20 years, visiting most of the wine regions of France. Through this "job" I developed a love for wine and the stories that often accompany the pulling of a cork. I live in Houston with my lovely wife and two wonderful sons.
View all posts by the drunken cyclist →
This entry was posted in Champagne, Chardonnay, Pinot Meunier, Pinot Noir, Rolle, Sparkling Wine, Wine. Bookmark the permalink.