I woke this morning to a severe bittersweet taste, and it all started at some point in the middle of the night. I had a dream that we through a big party and opened several nice bottles of champagne. And then I coughed. And infected everyone there with the, well, you know.

When reality came, shortly before six a.m., I realized that it was finally Sebastian’s birthday (he turns 12 today). He has been so excited all month and I think we are all happy for him (and even happier to get it in our rearview mirror). What made it even more special for him was when late yesterday afternoon, his school cancelled classes today and tomorrow (his school is virtual at this point, but still).

Hurricane Laura. It is currently a Category 3 storm, but it is expected to reach Cat 4 before making landfall later today. It was three years ago, on his ninth birthday, that we faced Hurricane Harvey, which was, well, pretty much awful.

The skies here in Houston are already grey and thick with humidity and although current predictions have Laura skirting Houston to the east (and we live on the west side of this huge city), it’s going to be a bittersweet day.

The other reason for my relative malaise is the fact that the Tour de France starts this Saturday. Don’t get me wrong, I love the Tour de France. As regular readers of this space know (perhaps all too well), I used to be a cycling tour guide in France and also an amateur bike racer. So the Tour was and is, right in my wheelhouse (pun intended).

Over the years, I have been fortunate enough to attend many stages in person, including the final stage on the Champs-Elysées a couple of times. The Tour is a spectacle which is hard to explain, it has to be experienced. I am not sure what it will look like this year–will the French spectators (who are notorious for flouting the rules) wear masks and maintain physical distance? I doubt it. 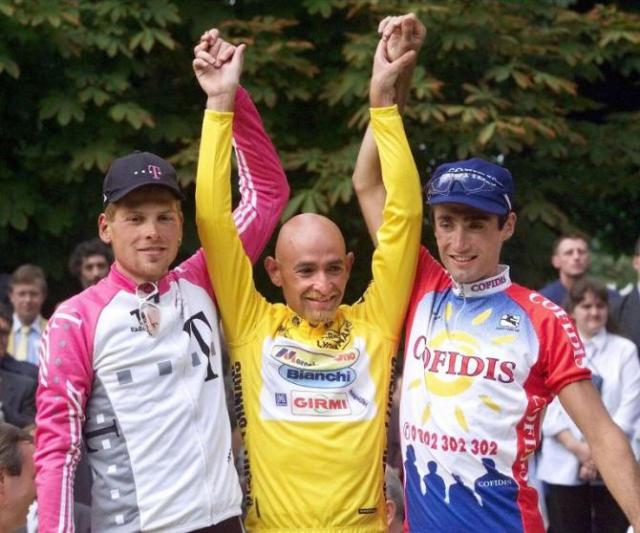 I was not at the ’98 Tour when my buddy Bobby (right) finished third (AFP Photo).

Regardless, the racing is to start on Saturday and once again this year I have picked my Fantasy Tour team (it is akin to FantasyFootball) and set up a league for my readers. It is free to enter and a great way to follow the Tour if one is so inclined. Here are the relevant deets:

Join me in the league now no.15285 : The Drunken Cyclists
Password : DNBTL
By clicking on this link : https://fantasy.letour.fr/#welcome/register/?parrain=7zicaky&ligue=15285&mdp=DNBTL

So how could the start of the Tour possibly be bittersweet? Well. On that day, August 29th, there will be another Tour de France starting. My buddy, Christophe Bristiel, the export manager at Château la Nerthe in Châteauneuf-du-Pape will be heading off on his own Tour de France.

La Nerthe is owned by the Richard family who also owns several other wineries across the south of France. Christophe has mapped out a 1200 kilometer route to visit each of the properties by bike. He will start in Beaujolais at Château de Corcelles and Château des Tours, heading south to Château la Nerthe, Le Domaine de La Renjarde, and Le Domaine Prieuré de Montézargues. Then he will climb Mount Ventoux and head across the Massif Centrale to Bordeaux to visit Château Gantonnet, Château de Barbe, Château Le Bourdieu-Vertheuil, and Château Victoria.

So how is this bittersweet?

I was supposed to be riding alongside him (well, actually far behind him–Christophe is a beast). Due to the totally inept handling of the coronavirus here in the U.S., however, Americans are banned from travelling to France (and most of the rest of the world, for that matter).

I will be talking to Christophe today and we will be setting up some tastings “together” while he is out on the road, which I will post here in some fashion. I will also see if I can squeeze a few prizes out of him for the Fantasy Tour that I mentioned above.

I have been an occasional cycling tour guide in Europe for the past 20 years, visiting most of the wine regions of France. Through this "job" I developed a love for wine and the stories that often accompany the pulling of a cork. I live in Houston with my lovely wife and two wonderful sons.
View all posts by the drunken cyclist →
This entry was posted in Châteauneuf-du-Pape, Cycling, Tour de France, Wine. Bookmark the permalink.