2006 DuMOL Syrah Jack Robert’s Run, Russian River Valley, CA: Retail $80. 100% Syrah (Clones 877 & 470). Shockingly (at least to me), this is the last bottle of DuMOL that I had in my possession. How could that happen? (I have an idea: while the wines are consistently fantastic, they have also approached the stratosphere in price). This Jack Robert’s Syrah is classic DuMOL: tons of fruit, particularly up front, with vanilla, sage, clove, black pepper, even sarsaparilla. Yeah, a ton going on here. A ton. That continues onto the palate with a velvety-smooth elixir of all that dark fruit and vanilla but also a cascade of complexity and impressive balance (particularly given the power). Whoa. While this wine was off the charts fantastic, I can’t help but lament the fact that I have no more DuMOL. Outstanding. 94 Points.

2011 Estate 1856 Red Blend, Dry Creek Valley, CA: Retail $38. 76% Cabernet Sauvignon, 12% Petit Verdot, 12% Malbec. Wow. It has been a minute. Friends were over to discuss their fall trip to Sonoma and were looking for “under-the-radar” suggestions. Estate 1856 certainly fits that bill. I visited a handful of years ago with Janice Schmidt at her dinner table and walked away with several purchased wines, including this “flagship” Cabernet (76%). Darker in the glass (thank you Petit Verdot and Malbec) than perhaps your standard 100% Cab, this is captivating and enticing from the first pour. Dark fruit abounds (as one might expect), with plenty of spice and enough verve to compel one to dive right in. Fruity, tart, complex, this is particularly worthy of remark. While the tannins seem to be mostly integrated at this point, my spidey sense tells me this still has some quality time ahead of it. Whoa. Outstanding. 94 Points.

2011 Estate 1856 Cabernet Sauvignon Barrel Reserve, Sonoma County, CA: Retail $42. 98% Cabernet Sauvignon, 2% Petit Verdot. It has been a minute since I have visited Janice Schmidt, the winemaker at Estate 1856 and I need to rectify that, which was glaringly evident after popping this bottle. Whoa. Dark in the glass but expressive on the nose with dark (naturally) fruit, loads of spice, and just the slightest hint of a green note (which I *love* and think is a natural note for properly grown Cab). I told Janice at the time that I purchased this bottle that the price was far too low given the quality: rich fruit, balancing tartness, spice, depth, length intrigue. What else could one want? Outstanding. 93 Points.

2019 Flowers Chardonnay Sonoma Coast, CA: Retail $38. Heavy bottle. Under DIAM10. My wife was not feeling well, so she suggested that her three boys (my two sons and me) head out to a relatively new local restaurant that has a limited menu, but a decent wine program. OK! I opted for this bottle of Flowers Chard since the sparkling wines were less than compelling and since it was another 90°+ day here in Houston, I was not feeling a red. Flowers has long been a favorite of mine (even after the sale) and this is an example of why. Yellow (if not golden) in the glass with a rich nose of lemon curd, acacia flower, and a bit of oak. The palate is quite fantastic, with that rich fruit, a clingy acidity, and a lengthy finish. OK. Whoa. Outstanding. 93 Points.

2013 Smith-Madrone Cabernet Sauvignon, Spring Mountain District, Napa Valley, CA: Retail $60. 82% Cabernet Sauvignon, 12% Cabernet Franc, 6% Merlot. If you are into Napa Cabs but not yet familiar with Smith-Madrone, I hate to say it, but you are failing at wine. A Spring Mountain stalwart since the 1970s, their Cabernet is always among my faves, and I honestly do not know how this 2013 lasted this long in my cellar, but I am oh-so-thankful that it did. Dark and a bit brooding in the glass with cassis and blackberry a go-go, there is also a slew of spices with clove, bay leaf, and sage. Whoa. The palate, in line with all that is Smith-Madrone focuses on the fruit, but there is so much more: great tartness, fantastic depth, and considerable length. But above all? The Smith brothers believe (at least this is what Stu told me) in balance–that a wine should integrate seamlessly with a meal, not dominate it. Bravo. Bravo. Outstanding. 95 Points. 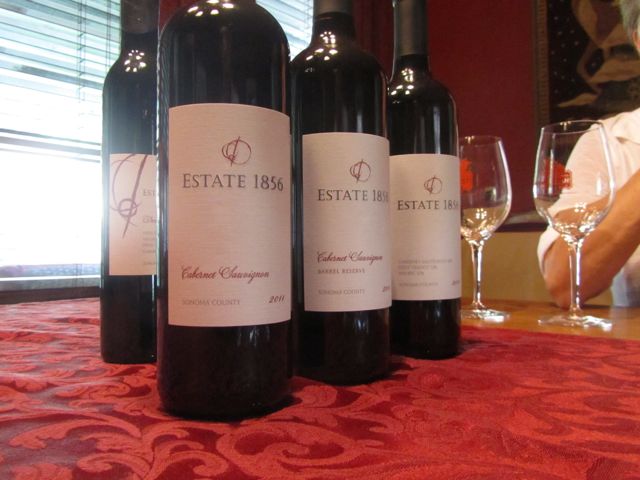 WINE OF THE WEEK: Wow, what a week! While it is not uncommon for us to pop some wonderful wines, I doubt there has been a week like this one where all the wines were firmly in the “Outstanding” range. We had some friends over for dinner at one point, which prompted a little cellar-raiding, and it feels like forever since we had done that. Choosing a Wine of the Week from this slate seems a bit arbitrary as all of them were memorable, fantastic, and had a bit of a story behind them. In the end, I opted for the two wines from Estate 1856 as the co-Wines of the Week since they have improved considerably since I first tasted them back in 2014 and, sadly, the winery recently closed up shop, finding the double whammy of devastating fires and the pandemic too much to overcome.

I have been an occasional cycling tour guide in Europe for the past 20 years, visiting most of the wine regions of France. Through this "job" I developed a love for wine and the stories that often accompany the pulling of a cork. I live in Houston with my lovely wife and two wonderful sons.
View all posts by the drunken cyclist →
This entry was posted in Cabernet Franc, Cabernet Sauvignon, Chardonnay, Malbec, Merlot, Petit Verdot, Syrah, Wine. Bookmark the permalink.