Tales From: My Last Night in Dry Creek Valley

In my first 32 hours in Dry Creek Valley, I had accomplished plenty:

From the Press Democrat

But I was not quite done. My wonderful hosts, Donald and Catherine Goodkin, organized a dinner at Diavola Pizzeria in Geyserville. We were joined by Liz and Richard Peacock, the owners of Spoke Folk Cyclery (who supplied the Specialized Tarmac bike that I used to ride in the Valley), and Sonja Bugica, who is both Assistant Winemaker at Seghesio Family Vineyards and co-owner of Diavola with her husband/chef Dino Bugica. 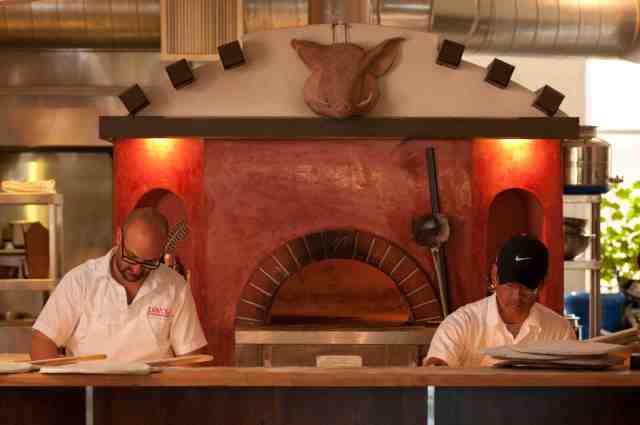 When it came time to order, we naturally deferred to Sonja who, after some coaxing, ordered some of her favorites. We started with a couple of plates of House Cured Salami and Cheese as Chef Dino and his staff butcher and cure all the meats. There was also an order of Braised Beef Tripe alla Fiorentina, which would not be something that I would typically order, but it was fantastic (and a bit spicy). Last, we had a couple orders of Oven Roasted Beets, served with arugula, quinoa, oranges, and avocado. They were dressed in a light vinaigrette and while I do not pretend to be a food critic, I am a bit of a beet expert (there are two things I will always order if I see either on a menu: the beet salad and the tarte tatin) and this dish was up there near the top that I have ever tasted.

Sonja ordered several different pizzas for the main course: the Bambino (a Sicilian style baked pie with smoked sausage and black olives), the Cha Cha Cha (smoked pork belly, roasted red peppers, and goat cheese), and a couple of the eponymous Sonja (marscapone, prosciutto, arugula). All the pizzas were fantastic as one would expect given Jameson Fink‘s endorsement, declaring Diavola the makers of his “favorite pizza in the country.”

To help us along with dinner, Sonja brought along a couple of bottles from her day job at Seghesio: a 2011 Seghesio Cortina Zinfandel ($38 retail) and a 2009 Seghesio Venom Sangiovese ($54). Both wines were “Outstanding”, but there are no formal notes from the evening. The wines, albeit fantastic, played but a minor role in the evening’s several acts. Instead, the focus was where it should be: the people sitting around the table.

Richard, Liz, and Sonja, despite having lived in the U.S. for years, were delightful examples of the contrast between their two native cultures. Richard and Liz were initially rather quiet and demure, ceding the floor to the vivacious Sonja. As the evening progressed, and the wine circulated, however, stories began to flow much more freely from all involved–underscoring the “social lubricant” function of a bottle of wine on the table.

Discussion weaved flawlessly through countless topics: children (Sonja has children roughly the same age as mine), the work/life balance (Richard has a full-time job outside the bike shop, putting in close to 80 hours a week between the two), and accents (we spent a fair amount of time assessing Richard’s accent, which seems to have evolved [devolved?] into a charming blend of American and British).

Sonja has what I think most would call a rather thick Italian accent, but it only adds to her considerable charm–she shared a few stories about how her children react when she converses in English (she speaks Italian to her kids), leading to one of the many bursts of laughter over the course of the evening.

It was a wonderful end to my brief stay in Dry Creek Valley as it showcased what I have felt for quite some time: wine, while complex, intriguing, and perhaps worthy of further study, is intended to be consumed at the table, with a complimentary meal, preferably with family and friends. We all (myself included) spend far too much time trying to unlock the mysteries in the glass and fail to fully appreciate the magic of sharing a bottle of wine.

Thanks to Richard, Liz, and Sonja for sharing the evening with me.

I struggle to write an apt appreciation for Donald and Catherine Goodkin, my incredible hosts for the two days in the Valley–I only hope that I am able to return the favor.

I have been an occasional cycling tour guide in Europe for the past 20 years, visiting most of the wine regions of France. Through this "job" I developed a love for wine and the stories that often accompany the pulling of a cork. I live in Houston with my lovely wife and two wonderful sons.
View all posts by the drunken cyclist →
This entry was posted in Cooking, Restaurant Review, Sangiovese, Wine, Zinfandel and tagged Catherine Goodkin, Dino Bugica, Dry Creek Valley, Richard Peacock, Seghesio. Bookmark the permalink.

18 Responses to Tales From: My Last Night in Dry Creek Valley